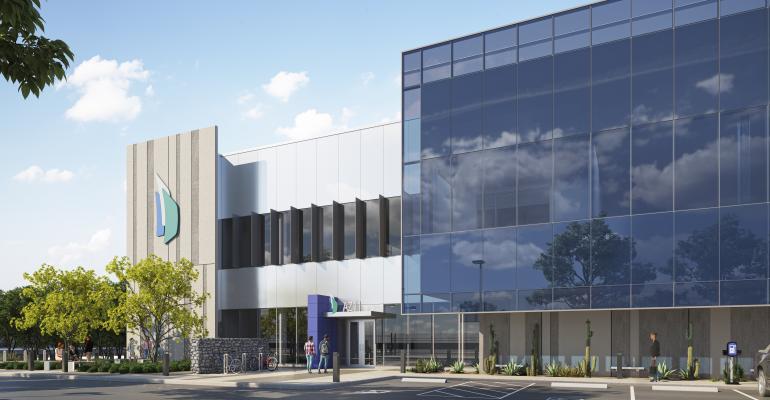 Hyperscale data center specialist Vantage Data Centers has finished major structural work on the first of three facilities it is planning to build on a 50-acre campus in Goodyear, Arizona.

The first building will offer 32MW of power capacity and is set to open in spring 2022.

When fully built out, the site in Arizona will offer 160MW of capacity and more than a million square feet of space, becoming its largest campus in North America.

“The city of Goodyear has established itself as a dynamic locality by attracting top technology companies and knowledge-based jobs. We look forward to a sustained partnership as the first facility opens its doors next year,” said vice mayor Brannon Hampton.

Vantage launched back in 2010 with the purchase of Intel’s data center in Santa Clara. The company was acquired by real estate investment trust DigitalBridge in 2017, and became the foundation for a very well-funded hyperscale data center business.

Its latest project is located near Phoenix, one of the top five data center markets in the US. Vantage originally announced the plans for a 160MW campus in 2018, when it purchased the land.

“Our customers have identified Phoenix as an ideal location due to its low power costs, rich connectivity and business-friendly environment,” said Jeff Tench, president for North America at Vantage. “This is a fitting market for hyperscalers, cloud providers and larger enterprises who need a west coast presence for their digital infrastructure requirements.”

Data centers on the upcoming campus will feature a closed-loop chilled water system with air-side economizers to minimize water consumption in the state’s dry conditions.

In August, the company announced plans to shift to net-zero by 2030, pledging to invest in R&D for technologies like energy storage and power-backup alternatives to diesel generators, renewable energy procurement, collaborating with data center tenants to reduce their carbon footprint, and building a supply chain of vendors whose climate goals are aligned with its own.

Vantage has been spending eye-watering sums to grow its footprint worldwide. In 2020, the company earmarked $2 billion for its European expansion, which later turned out to include the purchase of NGD Data and its 180MW campus in Wales in the UK, set to reach 270MW when fully built out.

In September, it entered the Asia-Pacific market through acquisitions of Agile Data Centers and PCCW’s data center business, in a deal fueled by $1.5 billion in incremental equity raise led by DigitalBridge. The deal includes ownership of facilities in Tokyo, Osaka, Melbourne, Hong Kong and Kuala Lumpur, and is expected to close before the end of the year.

In October, Vantage kicked off the construction of its first African campus in Johannesburg, South Africa, expected to reach 60MW when fully occupied. The first phase of the project, slated for completion in the summer of 2022, will include a 16MW building.

“Our first campus has a planned investment of more than US$ 1 billion, and it will create hundreds of jobs to positively impact the local economy,” Antoine Boniface, president at Vantage EMEA, said at the time.