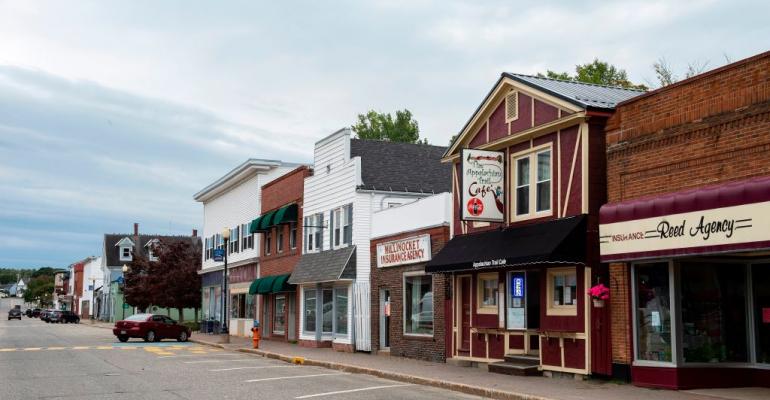 Nautilus Will Build Its Next Data Center on Dry Land, in Maine

The company known for its floating data center in California unveils a project on a former paper-mill site in Millinocket.

Nautilus Data Technologies, the company that recently launched a floating colocation data center in Stockton, California, will build its next project on land, using the same water-based cooling technology it designed.

On Saturday the company’s executives, together with politicians from the state, announced a data center project on a site in Millinocket, Maine, where a massive paper mill once stood.

The Great Northern Paper Company, which at its peak was one of the largest producers of newsprint in the country, was based in Millinocket. As it declined, so did the local economy, and the data center project is an attempt to revitalize it, Nautilus CEO James Connaughton told DCK.

Building a data center on dry land may seem off brand for a company that made its name by building one that floats, but Connaughton said that’s not the case.

“Actually, it’s 100 percent on brand, our brand being water cooling,” he said. “The first project was about proving water cooling at scale along with pre-manufacturing and delivery of an entire data center.” With the second, “land-side,” project “we’re trying to continue to establish and build out the core tech and show its flexibility and adaptability.”

Nautilus’s data center cooling technology adapts water cooling approaches used in other industries, such as power plants or ship engines, to data centers. It uses a closed-loop system that circulates naturally cool water from a lake, river, or sea to cool server rooms.

“The kind of cooling that we do is very well practiced in all of the other major sectors, except data centers,” Connaughton said.

The data center will be powered by an adjacent hydroelectric plant, which used to power the paper mill. Its cooling system will catch some water falling from the reservoir that powers the plant and use its energy to circulate cooling water – instead of electric pumps.

Maine’s governor Janet Mills and US senators Angus King and Susan Collins were expected to speak at the event unveiling the project in Millinocket Saturday morning. All three stressed the project’s sustainability elements and its potential to create positive economic impact in the rural area.

The data center is expected to require $300 million in investment. The site can support up to 60MW of power at full buildout, but Nautilus plans to expand it in 10MW increments, Connaughton said.

The area has been designated an Opportunity Zone, and the Nautilus data center will benefit from the program. The project will be financed through a combination of Opportunity Zone funding and traditional funding, the chief executive said.

Nautilus will sell wholesale data center capacity at the site. It has already struck agreements with the first set of tenants, including the Maine State Chamber of Commerce and the Jackson Laboratory, a biomedical research institution in Bar Harbor, Maine. Connaughton said he could not disclose who the other tenants were.