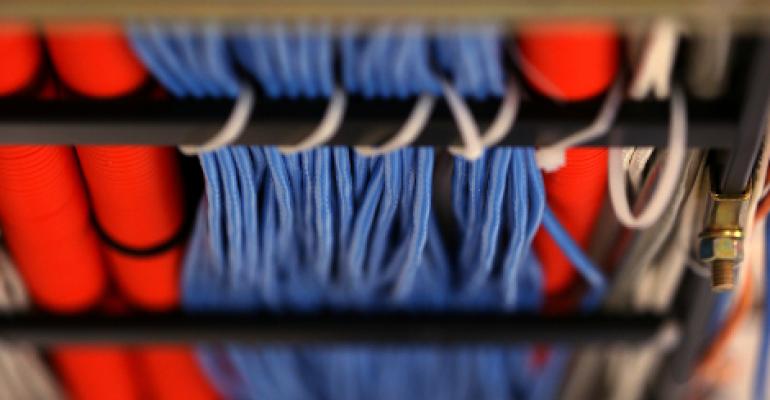 Michael Bocchieri/Getty Images
In this photo illustration, network cables are plugged in a server room on November 10, 2014 in New York City. U.S. President Barack Obama called on the Federal Communications Commission to implement a strict policy of net neutrality and to oppose content providers in restricting bandwith to customers
Colocation

London Leads in Private Data Center Interconnection Ahead of Brexit

Jeremy Kahn (Bloomberg) — London is set to retain its position as the city with the greatest capacity in private data links, a lead that may help stem any erosion in the city’s position as Europe’s premier financial center, even after the U.K. leaves the European Union.The U.K. capital currently has an installed bandwidth of 159 terabytes per second, a figure that exceeds any other European city and is greater than the capacities in either New York or Silicon Valley, according to a new report from Equinix Inc., a U.S. company specializing in data centers that host many of these private data connections.

The report, released Wednesday, forecasts that London will retain this lead, with its overall private bandwidth tripling to 486 terabytes per second by 2020.

Businesses are turning to private data networks due to the huge amounts of data they are now generating, where public internet connections may struggle, said Russell Poole, managing director of Equinix’s U.K. business.

The rapid transfer of data has long been of importance to the financial sector. Exchanges have been letting traders place their computer servers next to exchange systems -– a practice known as colocation -– in order to facilitate high frequency trading.

After telecommunications companies and firms that sell cloud and IT services, the banking and insurance sector is the largest user of private networks, Equinix said. And by 2020, the sector will exceed even those network-centric industries in its use of private data infrastructure.

Connections between businesses that have co-located their data in the same or adjacent data centers will “dwarf global internet traffic in three years,” Poole said.

Frankfurt, which has been trying to lure financial firms away from London since the Brexit vote, is also rapidly adding data centers and co-location facilities. The city will see its private network capacity expand almost 50 percent per year through 2020, the report said. But, at 252 terabytes per second, Frankfurt will continue to lag London by a large margin.

“The U.K. is already the largest collocation market in Europe and the third largest in the world due to its well-established interconnectivity,” said Darren Watkins, managing director for Virtus Data Centres Ltd., adding that since the Brexit vote, he had not seen any decline in business in the U.K.

Amsterdam, which is currently ranked second in Europe after London in the Equinix assessment, will see its capacity grow 42 percent per year to 242 terabytes per second by 2020. Paris, which has also tried to position itself as a rival post-Brexit financial hub to London, will only have 120 terabytes per second of installed capacity at that point.