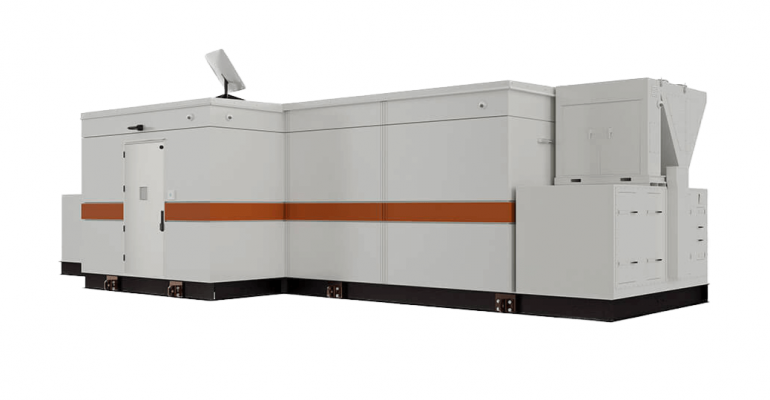 Each module offers the space, power and cooling required to run 100kW of IT equipment in a 2N redundant configuration.

As part of the service, Quantum can take over site selection, permitting, construction, and even maintenance of the facility. If the data center is no longer necessary, the company will pack it in, refurbish it, and ship it somewhere else.

Most importantly, customers get to pay for their white space over 7-10 years in operating expenditure, rather than having to make an upfront capital investment. They will have the option to buy the data center once the term of the initial contract is over.

Compass Quantum is led by Tony Grayson, who embarked on a career in data center design after spending 20 years in the US Navy, and has since built digital infrastructure for companies including Facebook, AWS, and Oracle.

“My vision of the future is we're gonna have this stuff everywhere,” Grayson told Data Center Knowledge.

Modular, containerized data centers are nothing new: usually based on the dimensions of the standard ISO shipping containers for easier transportation, they can be deployed in a fraction of the time it takes to erect a conventional bricks-and-mortar facility. Multiple containers can be combined for cost-efficient, incremental growth.

Major manufacturers selling modular data centers include Schneider Electric, Vertiv, Cannon Technologies, and Huawei, to name a few. Potential locations for these systems include factory floors, retail parks, cell tower sites – and further afield, they have been known to be air-shipped to warzones.

“This could go on the top of a hotel, could be in a parking lot in downtown Chicago, could be in the middle of the outback of Australia. I am incredibly agnostic where we deploy this thing,” Grayson said.

Compass is primarily known for building hyperscale colocation data centers in some of the most hotly contested markets in the US: locations like Northern Virginia, Phoenix, or Dallas.

It entered the modular market in 2018 with the purchase of startup EdgePoint, which came out of stealth just a year prior. The young company was founded by Sharif Fotouh, who previously deployed hundreds of containerized ‘fiber huts’ for Google.

Over the next few years, Compass continued to refine the original EdgePoint design – it’s on its second iteration of the modular facility, and is busy working on the third, which swaps concrete for more environmentally-friendly materials.

“It's cheaper, it's super simple to deploy now, and it doesn't weigh 64 tons,” Grayson said. “But it's all the infrastructure too: we have a great logistics setup, we have great partners who already own land, we're working with the general contractors who actually install the towers.”

Each container has space for up to 12 full-sized racks, and is equipped using commercial off-the-shelf parts. Compass says these can be deployed in four months, anywhere in the world.

Where the Quantum approach is different from the competition is it brings the cloud-inspired ‘pay-as-you-go’ model to edge infrastructure.

Grayson emphasized that White Space-as-a-Service is designed to be cost-competitive: “You pay a monthly fee for the land, for the unit, for the operations aspect of it, or the maintenance aspect, and it's just like you're in a hyperscale data center – no different than you going into Ashburn and paying 70 bucks per kilowatt. Now, you're paying a little bit more than that [with Quantum], but the difference is you get it anywhere where you want it. And mostly, it is cheaper than retail.”

Meanwhile, the managed aspect means the customer doesn’t have to worry how to staff the facility at a time of an industry-wide skills shortage, or even make sure that there's an engineer within driving distance – this responsibility can be outsourced to Quantum.