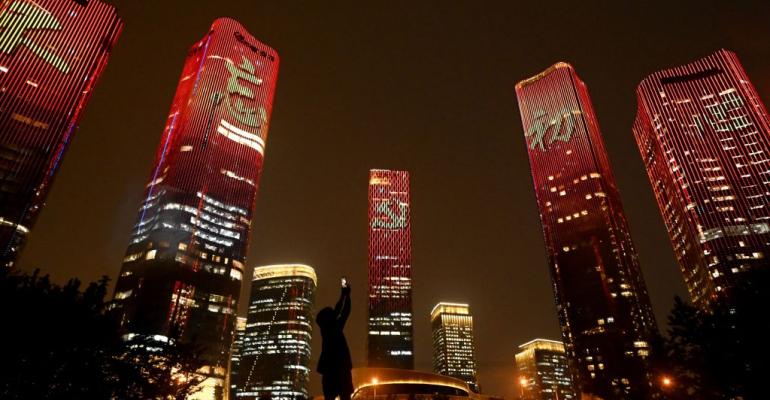 Getty Images
Buildings displaying a light show on the eve of the 100th anniversary of the Chinese Communist Party in Beijing on June 30, 2021.
Colocation

Looking to offload some of the strain on the country's mega-cities.

A total of eight locations are now included in the initiative promoted under the banner of “processing eastern data in the west (东数西算).”

Related: China’s Got a New Plan to Overtake the US in Tech

Four of these were announced by the same agency in December 2021, to be located in the northern Inner Mongolia region, northwestern Ningxia region, Gansu province and southwestern Guizhou province.

The Thursday announcement adds campuses in the Beijing-Tianjin-Hebei region, the Yangtze River Delta, the Guangdong-Hong Kong-Macao Greater Bay Area, and the Chengdu-Chongqing economic circle – regions where most of its users are located.

NDRC’s core policy focus is to build data centers in the country’s economically under-developed but energy-rich western provinces, to offload some of the demand on data centers in Beijing and large coastal cities.

“The eight national computing hubs, as the backbone connection to China's computing network, will develop data-center clusters, carry out collaborative construction between data centers, cloud computing and big data, and bridge the gap between eastern and western regions in computing resources,” the Commission said.

The plan envisions state-sponsored data center clusters, each consisting of multiple facilities. In previous statements, NDRC said that it would prioritize regions with high availability of renewable power.

A spokesperson for the Commission told state broadcaster CCTV that the data center plan was expected to generate 400 billion yuan ($63 billion) in investment every year – including opportunities for telecommunications, software, clean energy and civil engineering.

The announcement caused a data center stocks rally on China's A-share market on Friday, according to Global Times, with domestic data center operator Shanghai AtHub among the winners.