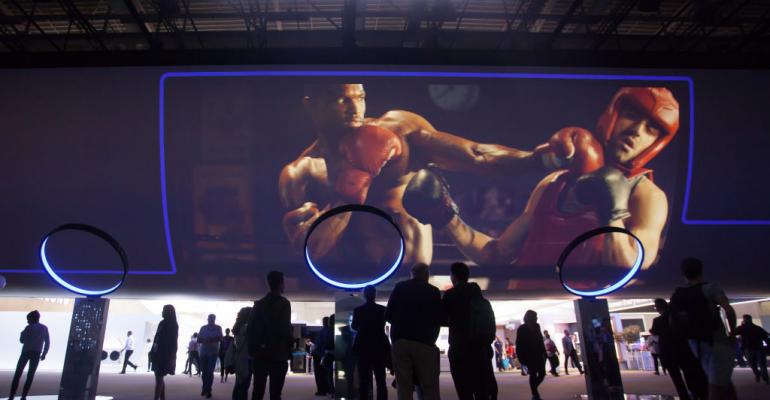 Samsung Group is building a data center not far from the border between South Korea and North Korea with the goal of launching a cloud service that will take on giants like AWS and Azure • The smartphone market is slowing and the boom in memory chip prices is expected to come to an end • But the cloud market is growing, and arms of Samsung already make key cloud infrastructure parts, such as data storage • Samsung is targeting large enterprises that use multiple cloud providers with a service that lets them manage data like it was a single cloud

Sam Kim (Bloomberg) -- The best place to put a data center in South Korea, it turns out, also happens to be close to one of the most dangerous in the world.

Barely an hour from the border with North Korea, in what used to be a civilian shooting range, Samsung Group is building a facility with the ambitious goal of challenging well-established cloud-computing providers Amazon.com Inc., Microsoft Corp. and Google.

It’s a familiar position for a company that came from behind to lead the world in smartphones, televisions and memory chips. Before setting its sights on bigger rivals, the conglomerate plans to dominate its home ground first by making customers out of its vast empire of about 60 businesses spanning electronics, construction, insurance and credit cards. And one day it may even serve as a stepping stone toward an even more audacious goal: putting data centers in North Korea, where colder temperatures can bring down the cost of keeping servers cool.

“It’s my dream to build a data center in Kaema,” said Hank Bae, an engineer leading the construction in Chuncheon, referring to the northern highland nicknamed “the roof of Korea.” Winter temperatures there can go down to minus 20 degrees Celsius (minus 4 degrees Fahrenheit). “I’d go anywhere if it’s cool, but for now, this is our best bet for a data center.”

Chuncheon, where Samsung is building the cloud-computing center, boasts natural advantages. The Y-shaped building, sitting on a hill surrounded by a Buddhist temple, pine trees and an army base, is situated in the least earthquake-prone region of South Korea. The average temperature is 2 degrees Celsius lower than in Seoul, helping to cut cooling costs as much as 80 percent. The flip side of the location is that it’s about 50 kilometers away from the border with North Korea, where hundreds of thousands of troops are stationed.

As relations between Seoul and Pyongyang continue to improve, some at Samsung hold out hope that future data centers could be located in North Korea, beyond the demilitarized zone, if the countries are reunified. Maybe someday it might happen. Jay Y. Lee, vice chairman of Samsung Electronics Co., visited North Korea in September as part of a business delegation led by President Moon Jae-in.

With the smartphone market slowing and expectations that the boom in memory chip prices may be over, cloud offers an appealing option for Samsung. Not only is it growing, with the market for infrastructure services forecast by Gartner to more than double to $83.5 billion by 2021, but arms of Samsung already make key parts such as data storage technology.

“The era of cloud is coming, so if we don’t do it, we’re going to be weeded out of business,” said Kim Ho, vice president of Samsung SDS Co., the group’s software and cloud-business arm that is leading the project. Lee is the biggest individual shareholder in SDS.

The company already has several data centers at home, used to keep track of the products it sells around the world. But none of them are tailored for external customers like the Chuncheon center.

As it looks for an edge to win clients, Samsung is targeting the more than 80 percent of large enterprises that use multiple cloud providers with a service that lets them manage their data like it was a single cloud.

“This is not a bad strategy for Samsung, indeed perhaps the only one that they can try right now given the maturity of the market,” said David Linthicum, chief cloud strategy officer at Deloitte Consulting. “However, they are really in the managed services provider world, with hundreds of companies currently playing in that space. While Samsung should be able to scale better, they need to do some things that are more creative and innovative to stand out.”

“Companies eventually reach a certain critical mass and realize that setting up private servers is more efficient,” Kim said, citing Dropbox, which has moved to to its own storage. “Especially for companies like Samsung that produce semiconductors, their data are top national secrets and we think there’s demand in these areas.”

While cloud wasn’t mentioned among the several emerging technologies that Samsung singled out in a $160-billion investment plan in August — rather it was artificial intelligence, fifth-generation wireless networks and automotive electronics components that were talked about — it is a central piece of the picture because it will store and handle the data they generate.

“Operating a data center efficiently is a major challenge and outperforming Google’s or Amazon’s data centers will be very difficult,” said Guillaume Pierre, professor of computer science at the University of Rennes, Inria. “The fact that Samsung will provide its own data centers may make sense in particular if Samsung’s specific hardware expertise can be used to outperform mainstream cloud operators’ data centers.”