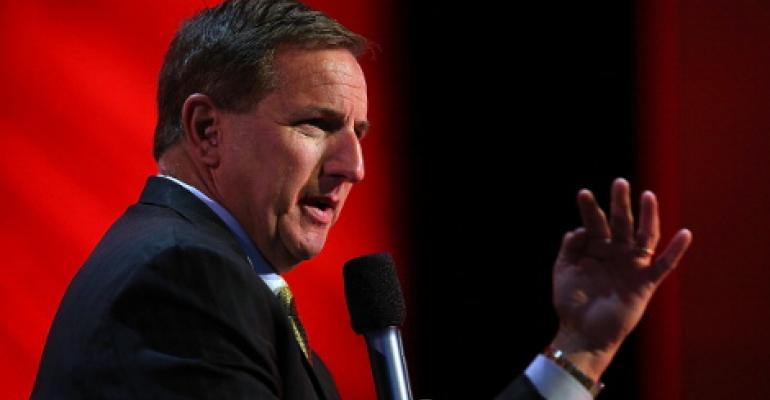 Oracle Wants Its Cloud to Grow Inside Your Data Centers

Taking a different approach to hybrid cloud than some of its biggest competitors, Oracle has substantially beefed up the capabilities of its on-premises cloud product called Oracle Cloud at Customer. It gives companies the ability to use its cloud services but have them run inside their own data centers.

The company launched the Oracle Cloud at Customer service last year. It installs and manages all the converged hardware, software, and networking equipment on premises, essentially provides organizations a private version of its public cloud through a subscription-based model.

Oracle last week expanded services it offers in this way to include Software-as-a-Service applications, including ERP and CRM software, and its full suite of Platform-as-a Service offerings. The company previously only offered Infrastructure-as-a-Service, and some PaaS services on Oracle Cloud at Customer.

Analysts say the announcement allows Oracle to better compete against cloud rivals, such as Microsoft, IBM, Amazon, and Alphabet’s Google. All leading enterprise cloud players’ approaches to hybrid cloud are now starting to take shape, all quite different from each other.

“The update to [Oracle’s] Cloud at Customer is competitive with Azure Stack,” Dave Bartoletti, VP and principal analyst at the Forrester Group, told Data Center Knowledge. “The appeal is for customers who want a bit of the Oracle Cloud running on-premises for whatever reason: security concerns, data residency, or simply a desire to control data and apps more directly.”

IBM’s BlueMix Private Cloud Local is another on-premises play that’s similar to Oracle’s and Microsoft’s, while Amazon Web Services and Google Cloud Platform at this point only offer migration and integration services.

For example, Google this month struck a deal with Nutanix, a hyperconverged infrastructure vendor, to help organizations build hybrid clouds that integrate their Nutanix environments with GCP. Meanwhile, AWS partnered with VMware to help enterprises easily integrate their existing VMware environments with its public cloud. Last week, however, an anonymously sourced report appeared, saying the two may have a joint on-premises data center software product in the works.

IDC research VP Carl Olofson said Oracle’s latest upgrades of Cloud at Customer are important for the company because it wants to move as many existing customers to the Oracle Cloud as possible. The hybrid approach allows IT organizations to take an intermediate step toward the cloud.

“People have complicated data centers with interconnections with Oracle and non-Oracle applications. So moving to the cloud is a big deal for them. They have to plan it out, decide which cloud to move to and how to do integration. Left to their own devices, it could take years to work this out,” he said. “By putting a remotely managed system in their data center, they can still physically connect to the things they need to connect to. It’s not too hard to adopt and digest because they don’t have to do everything at once.”

Every Type of …aaS

Oracle says its on-premises cloud has already seen a lot of success. The company last week announced that large enterprises across 30 countries, including AT&T and Bank of America, have adopted Oracle Cloud at Customer.

Other new services include improved security through Oracle Identity Cloud, which provides identity and access management services, as well as application development, Big Data and analytics services, he said.

Mehta noted that one big difference between Oracle and Microsoft’s on-premises offerings is that Oracle provides the entire service on its own, while Azure Stack users have to purchase the hardware and get support from a vendor other than Microsoft.

Oracle customers pay the same subscription prices as if they were using the public Oracle Cloud, he added. The equipment that is installed in customer data centers is owned and remotely managed by Oracle – much like a cable company providing home users a digital video recorder or modem for internet access.

“You can now bring the cloud right to your doorstep,” Mehta said. “The important thing is we took the exact same infrastructure in the Oracle Cloud and brought it to the customer. It is tested and proven at scale.”

What Does It Mean for the Data Center Manager?

While Oracle technicians install and manage the on-premises equipment, data center operators have to provide power, cooling, and network connections. Enterprises can use their own data centers or colocation facilities, whatever they feel most comfortable with, Mehta said.

“We use standard racks and specify what the data center manager must provide us in terms of power, cooling, and network connectivity,” he said. “They look at the spec sheets and work on sizing with us and the positioning of these racks.”

Enterprises that implement Oracle Cloud at Customer typically start with a minimum configuration of 100 compute cores, and as their needs grow, they can add more infrastructure. “They can slap them together like Lego blocks,” he said.