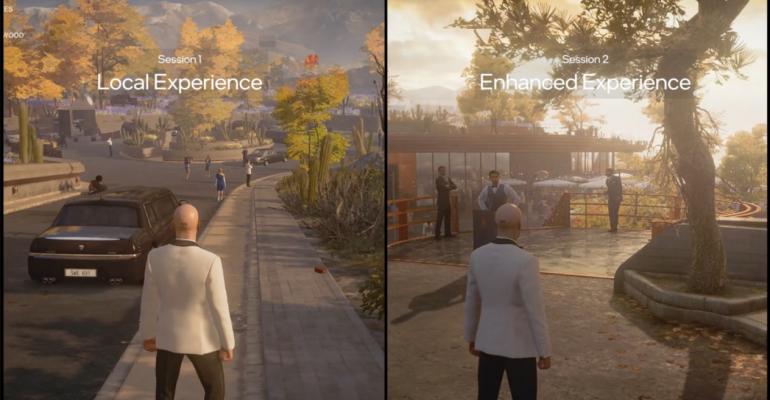 Raja Koduri outlines the vision of a world enabled by ambient computing in Intel’s first public statement on the Metaverse.

IT infrastructure that powers the Internet will need major upgrades to bring the Metaverse from theory to practice, according to Raja Koduri, SVP and GM of Accelerated Computing Systems and Graphics at Intel.

Speaking at the RealTime Conference on Monday, Koduri outlined the vision of distributed applications that can harness whatever compute resources are available nearby – which he later described in a blog post.

“We need several orders of magnitude more powerful computing capability, accessible at much lower latencies across a multitude of device form factors,” Koduri wrote. “To enable these capabilities at scale, the entire plumbing of the Internet will need major upgrades.”

If you build it, they will come

For Intel, the Metaverse “may be the next major platform in computing after the world wide web and mobile.”

However, Koduri warned that existing data centers are not ready to deliver the full range of experience promised by the likes of Meta’s Mark Zuckerberg.

“Consider what is required to put two individuals in a social setting in an entirely virtual environment: convincing and detailed avatars with realistic clothing, hair and skin tones – all rendered in real time and based on sensor data capturing real world 3D objects, gestures, audio and much more; data transfer at super high bandwidths and extremely low latencies; and a persistent model of the environment, which may contain both real and simulated elements,” he wrote.

“Now, imagine solving this problem at scale – for hundreds of millions of users simultaneously – and you will quickly realize that our computing, storage and networking infrastructure today is simply not enough to enable this vision.”

According to Koduri, Intel is working on building blocks for the Metaverse that can be summarized into three layers. The ‘meta intelligence’ layer is focused on a unified programming model and open software development tools and libraries to enable developers to deploy complex applications more easily.

The ‘meta ops’ layer describes the infrastructure layer that delivers compute to users beyond what is available to them locally.

And the ‘meta compute’ layer is the raw horsepower necessary to power Metaverse experiences.

A tale of two hitmen

At the RTC event, Intel demonstrated some of the tech that can be placed into the ‘meta ops’ category. It was showing Hitman 3 – a popular video game released earlier this year and notable for its resource-intensive visuals – running on a laptop equipped with Iris Xe GPU. The game was suffering from low frame rates and frequent stuttering, with CPU and GPU utilization approaching 100%.

The situation was markedly different when using Intel’s tech to tap into the compute of a remote desktop PC – all without leaving the confines of the laptop’s operating system.

According to the presentation, this was possible through system resource abstraction: rather than running the entire compute instance on remote hardware, like you do with virtual machines, Intel’s approach extends specific resources, to be delivered over the network.

“This is the decoupling of user experience from infrastructure,” the presenter said. “There were no hoops to jump through, no complicated considerations, no creating multiple accounts on streaming services, and no worrying about persistence of game saves and settings.”