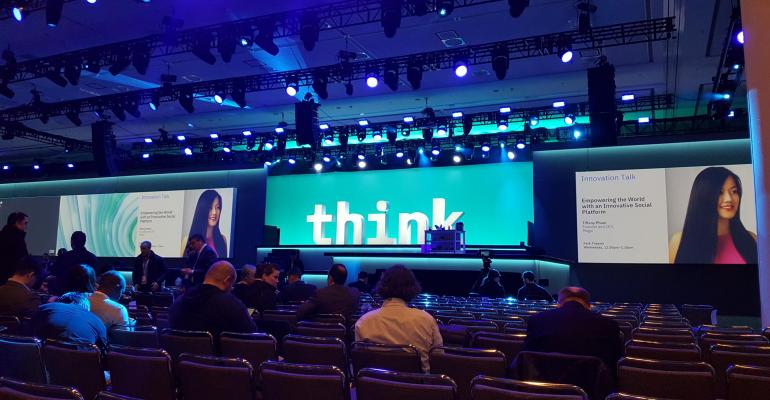 SAN FRANCISCO -- IBM is working on solving a lot of enormous, global problems using its technology, from reducing food waste and the spread of foodborne illnesses to helping people communicate during natural disasters. What runs behind the scenes is a vast network of clouds, containers, edge devices and more that help its researchers bring these innovations to life. Diverse, multi-cloud environments can create other problems. Namely, their complexity makes them difficult to manage.

“About year or so ago, [IBM] looked at what is happening around enterprise adoption of cloud and realized that there are 20 percent of workloads that can move to the cloud, and there are a lot of choices there, but there was something fundamentally holding back the rest of the 80 percent,” IBM general manager, cloud, Don Boulia tells ITPro Today.

IBM determined what was holding these workloads back were enterprise concerns centered around three main areas: integration, data, and consistency. How IBM multi-cloud customers will tackle these challenges was a consistent thread this week at IBM Think 2019 in San Francisco.

“If your applications are all over the place, what becomes important is integration,” Boulia said. To that end, IBM introduced the IBM Cloud Integration platform, a container-based platform that connects applications, software and services regardless of vendor or where the data is hosted. It offers a set of integration tools in a single development environment.

“So, we've been talking about agility for a long time … and typically what that means is that you can build things fast,” Boulia said. “The success in an enterprise is not about how quickly you build stuff, but how quickly you get it into production. And to get things into production, you must take care of the boring stuff like security, availability, backup, SLAs, etcetera.”

The IBM Cloud Integration platform helps enterprises do this because it allows integration specialists to write, test and secure code one time, store it in the platform, and then reuse it, saving them time while ensuring they are compliant with security requirements.

In addressing the challenge around consistency, IBM introduced the IBM Multicloud Manager commercially in October 2018, which allows enterprises to manage Kubernetes clusters across multi-cloud environments. Steve Robinson, GM, IBM hybrid cloud, said that enterprises can set consistent policy and more dynamically move them from one location to another.

“For us, one of the exciting things about Kubernetes was that it was a consistent model adopted by the community be open and it was available everywhere across different providers,” Boulia said. “And secondly, Kubernetes was designed to a point where it did meaningful stuff both to the newer cloud-native applications as well as traditional applications.”

Wrangling legacy and traditional applications will continue to create challenges for enterprises as they consider what to do with the 80 percent of the applications that still haven’t found a home in the cloud, as they also try to maintain consistency across their environment.

“I think to a certain extent the last few years have been significantly disrupted by cloud in a variety of factors, in the way it changed people’s opinion, the way it changed VCs behavior, how it changed enterprise behavior. I think to me, the most important thing, however dull or boring it might sound, is to really harden that,” Boulia said.

“And hardening is unfortunately boring. It is painful, it doesn’t get headlines, but it is what makes technology sustainable. And if you look at the spirit of a lot of our announcements, we didn't answer the next form of cloud, or we didn't say computing is going to move from cloud to something else. It was how do you make this more sustainable and more scalable and more relevant to become a foundational technology.”

“And over the next 12 months, I see that as being really imperative because I think part of the dangers of innovation is you never stick long enough to something before the next thing comes up. And enterprises don't have the skill or the ability for a variety of factors to keep up with that pace of innovation. There must be a point of stability where they can transform themselves and get ready for the next phase of innovation. And I think we are in that gap with the initial stuff around the cloud.”