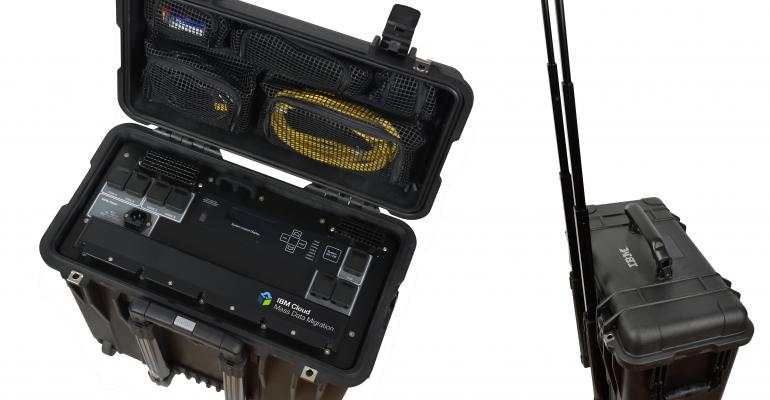 One of the barriers for enterprises storing data in the cloud is data migration, a process that has traditionally been slow and costly, hindered by network limitations. IBM wants to remove this barrier for its customers with a new cloud migration solution designed for moving massive amounts of data to the cloud.

IBM Cloud Mass Data Migration is a shippable storage device, which offers 120 TB and uses AES 256-bit encryption. The device also uses RAID-6 to ensure data integrity, and is shock-proof. The device is a flat-rate, and includes overnight round-trip shipping.

The device is about the size of a suitcase, and has wheels so it can be easily moved around a data center, Michael Fork, distinguished engineer and director, cloud infrastructure, IBM Watson and cloud platform said. Fork said that the solution allows customers to migrate 120 TB in seven days.

“When you actually look at the networking aspects of this, for example if you were to transfer 120TB over a 100 Mbps internet connection, that would take 100 or more days,” he said.

Similar options on the market include the AWS Snowball Edge, which was launched last year and offers 100 TB of usable storage capacity. In June, Google introduced Transfer Appliance, which offers up to 480TB in 4U or 100TB in 2U of raw data capacity. In the chart below, Google broke down how long data transfer can take over different connections.

“Previously we supported two main transfer methods. One was an IBM solution called IBM Data Transfer service, and this allows you to ship us a USB hard drive or CD/DVD, and so you could migrate in up to 10 TBs of data pretty easily using that service,” Fork said. “The other solution IBM supports is through IBM Aspera, a network-based transfer.”

IBM Cloud Mass Data Migration is designed for any customer that has large amounts of data to migrate to IBM Cloud, Fork said, pointing to customers who move large SAP datasets or datasets for use with IBM Watson or other cognitive services.