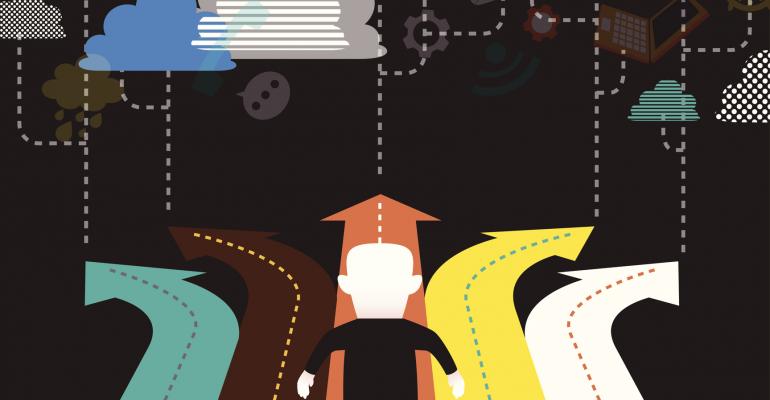 How Six IT Experts View the Data Center vs. Cloud Decision

While the data center vs. cloud decision ultimately comes down to economics, it is critical for CIOs to understand the impact on overall business strategy.

The enterprise data center is not dead, but CIOs must constantly measure and re-assess application needs before deciding between data center vs. cloud, panelists at the DCD>Enterprise conference in New York this week said.

While the data center vs. cloud decision ultimately comes down to economics, it is critical for CIOs to understand all associated costs and the impact on overall business strategy as they become key players in their organization’s digital transformation.

“Pretty much every CIO we talk to has a strategy of things that will go to the public cloud, and things that will stay on-prem,” Intel corporate VP, GM, data center solutions Jason Waxman said.

This reflects a fundamental change in the business, Ron Batra, executive architect at ServiceNow said, where the CIO is a trusted advisor to the organization, balancing innovation and business opportunity. This change is seen down to the storage and server architects who are being replaced by cloud architects that understand the technology, strategy and financial impact.

“You should be able to look at a balance sheet and the strategy,” Batra said.

Enterprise stakeholders need to align operational, technical and financial goals to find a solution they are happy with, whether that is on-premises, cloud, colocation, or a mix, Rick Drescher, MD, Critical Facilities Group, Savills Studley, said in a panel discussion on Tuesday.

“If you start with analyzing [Microsoft] Azure versus the competition, you’re starting four or five steps too far in the process,” he said.

“The choice cannot be made from infrastructure level up,” Batra said in a separate panel, noting that enterprises should look at the requirements of their own homegrown apps and third-party apps before deciding between data center vs. cloud.

“Innovations are happening at the application tier, those innovations can’t be done by enterprise IT the way it can be done by a cloud provider,” Batra said. “Modernization of applications and technologies is happening, and the security and engineering – you can’t compete with that.”

While there are a lot of cases where public cloud makes more sense, machine learning for example, experts caution against moving to the public cloud just to save money. Often, there are unexpected costs that may not have been accounted for in the initial assessment, such as a network connection that maybe you weren’t paying for when you were on-premises, Drescher said.

Jonathan Levine, CTO at Intermedia, agrees that it is not necessarily cheaper to run enterprise apps in the cloud.

“If the app is burstable, and you run it for fewer than 60 hours or so a week, then you’re better off in the cloud,” he said. “If you’re running an application at the same CPU load all the time, it is probably cheaper in-house, assuming you already have a data center or colocation setup.”

Capacity planning must reflect the fast pace in which data center technology is changing, but being too aggressive could be harmful to the business in the long-run. A report from CompTIA last year found that only 34 percent of some 500 U.S. business respondents plan their IT architectures beyond 12 months, though 36 percent said that this kind of planning allows for better collaboration between IT and business units.

“Anyone who says they know 10 years from now is out of their mind,” Drescher said. Even planning two to five years out is on the aggressive side.

“You don’t want to put yourself so far planned out that you are hurting the company so far in future,” he said.

Brian Green, VP, Global Lead Data Center Engineering & Operations at Visa, said, “You don’t know what’s going to happen in 5-10 years, but you have to have enough flexibility [and] anticipate for growth.”

It’s important for IT to see what is around the corner in the next 18-24 months, as ultimately it is about being accountable to the business strategy, not just providing connectivity, Green said. Not that connectivity isn’t important.

“You should always understand what the true cost of failure is,” he said. Understanding the costs of failure compared to the costs of resiliency should be at the core of every business case.

In addition to understanding the true cost of failure, Green says his team works to identify areas where they can more efficient and drive down costs, whether through LED lighting or raising temperatures on the cooling side of infrastructure.

Being able to drill down to these metrics requires full transparency in the environment, which can help you understand how much power a certain application is using for instance, and trace that to how much revenue it is worth on the business side.

“Each application ultimately has a P and L,” Green said.

If your core business is not in the data center, it is probably a good idea to look at colocation or public cloud, Drescher said.

“If you’re never going to have scale, you might be better off in someone else’s data center,” Waxman echoed in a separate panel. “If you do have scale, your network is going to be increasingly more complex.”

There is not one answer for the perfect enterprise configuration, and it is done on a case-by-case basis which allows for more flexibility.

“Don’t get married to the idea that you must own [a data center],” Mark Thiele, CIO & CSO at Apcera said. It is more important to support the services required to make the business successful than force a certain infrastructure to fit.