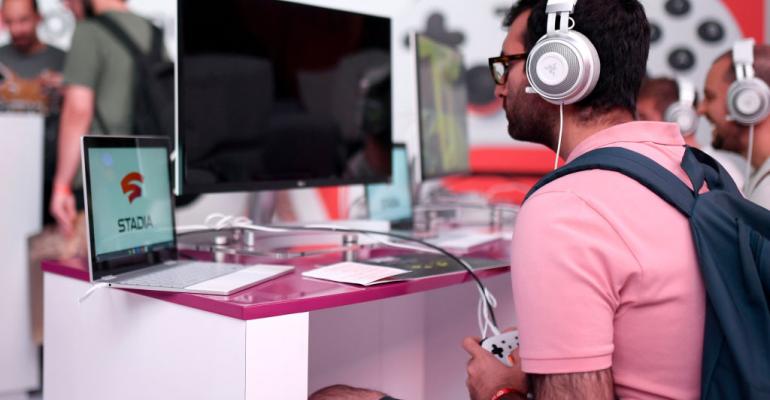 Getty Images
A visitor plays the cloud-gaming based "Doom" at the stand of Google Stadia during the Video games trade fair Gamescom in Cologne in 2019.
Cloud

Google has spoken with both exercise bike maker Peloton and Bungie, the developer behind the popular shooter game Destiny, over potential white label deals.

Google, which sought to enter the high-growth video games market long dominated by hardware-centric platforms, may be calling it quits on its fledgling cloud gaming service Stadia.

Instead, the company is looking to potentially license its proprietary game-streaming technology to other companies, which transmits games in high-definition with low latency, according to Insider.

The move to sell the underlying cloud tech has seen Stadia “deprioritized within Google,” with the company now less interested in securing licenses for Triple-A third-party titles, Insider reported.

The new white-label streaming service will be called Google Stream. Google has spoken with both exercise bike maker Peloton and Bungie, the developer behind the popular shooter game Destiny, over potential white label deals. Peloton reportedly would stream games to its exercise bikes.

Bungie was recently snapped up by Sony for $3.6 billion which could complicate the deal. Sony’s PlayStation was the second most popular gaming console in the U.S. in 2021, with a nearly 47% market share, according to Statista. Microsoft’s Xbox was on top, with a 53% share.

Google’s Stadia showed hints of trouble last year when the company closed down its internal gaming studio, Stadia Games & Entertainment, to focus on Stadia’s future “as a platform.”

In a January 2020 AI Business article, Cloud Gateway CEO Justin Day described the system as “a great concept and, as gaming should, brings together people across the world.”

Meanwhile Tom Leighton, CEO of content delivery network Akamai  – an expert in distributed computing with 50 patents under his belt – was skeptical about the service way back in 2019, saying that while it was technologically feasible, cloud gaming was too expensive to be viable at the time.

Insider said the largest problem for Stadia was player retention, with the service falling short of its goal by 25%. Stadia expected to sign up one million monthly active users by the end of 2020.