Yes, more organizations are turning to the cloud to stay online, but many businesses are also closing for good.

This year and next will be a mix bag for cloud service providers businesswise, as the IT world grapples with the COVID-19 pandemic’s impact.

There’s an influx of demand, as organizations adapt to remote work, education, entertainment, and virtually everything else. At the same time, many small and mid-size businesses have been shutting down, either temporarily or permanently, dragging down cloud revenue.

That’s according to analysts at Omdia, whose latest projection for 2020 Software-as-a-Service (SaaS) market revenue is 4 to 5 percent higher than previously expected. They expect the market to grow by 2 to 3 percent in 2021.

Omdia has lowered its previous revenue projection for the IT-infrastructure portion of the cloud market, which includes IaaS, PaaS, and CaaS, by 2 to 3 percent. That market is expected to gain 1 or 2 percent next year.

In addition to the effects of COVID-19, the forecast update also reflects actual 2019 results (as opposed to projections), new and updated cloud services, and data center footprint expansions.

Here’s the current cloud services revenue forecast, including SaaS and IT infrastructure services, as reported by the Omdia Cloud & Colocation Services for IT Infrastructure & Applications Market Tracker: 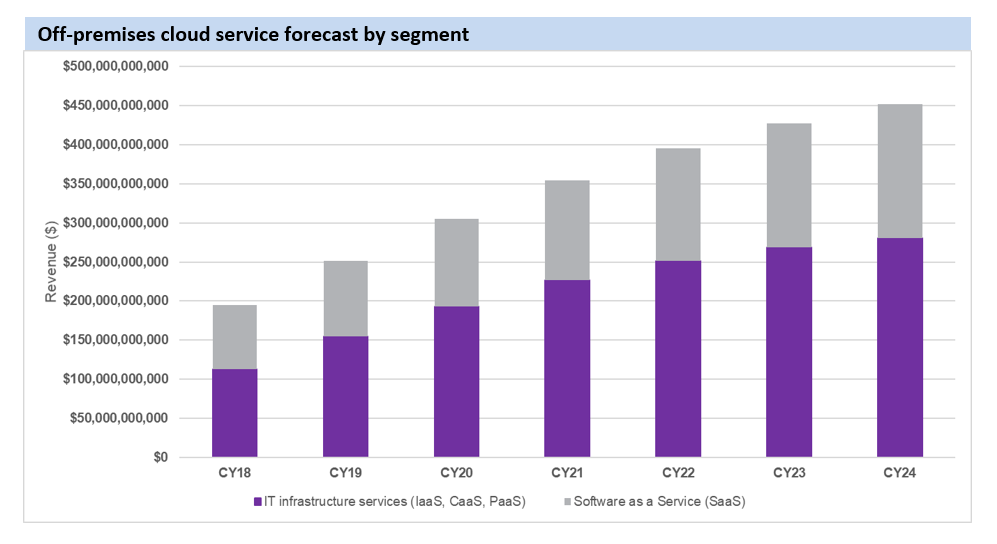 “On one hand, data center operators are experiencing massive surges in consumer usage of compute resources due to school closures, social distancing, and government work-at-home mandates. This is making it increasingly imperative to provide a reliable, scalable and secure cloud. The new rules for society have created new norms, resulting in increased demand for e-learning, remote working, binge television watching and other at-home activities. On the other hand, IT infrastructure services—i.e., IaaS, CaaS, PaaS—are experiencing equally negative effects as many small-and-medium businesses (SMBs) either temporarily shut down or prepare to close their doors permanently as they are unable to remain financially viable.”

In a research note, Adams also noted the recent expansion of edge computing offerings by some of the largest cloud providers, who are responding to the push by businesses to lower application latency by placing computing infrastructure closer to end users: