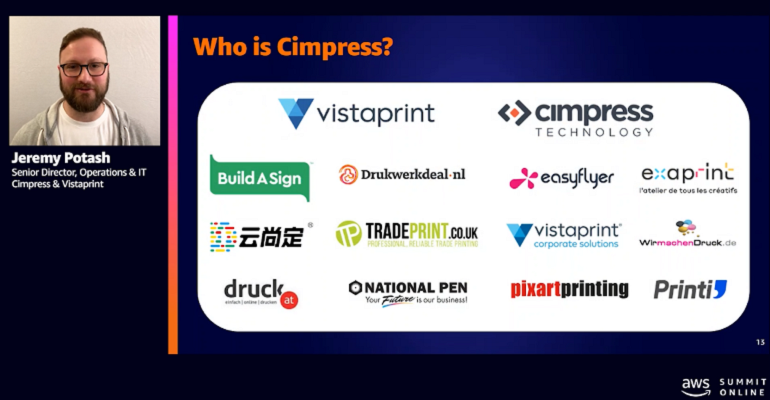 Cimpress Turns to the Cloud for IT Procurement

The cloud isn't just a way to shift from a capital cost to a consumption model – it can also be used to optimize the way companies buy and consume services.

The original key promise of the cloud was to make it easier and more cost-effective for organizations of any size to consume technology resources. It's an approach that started with virtual compute services and has evolved into much more, including enabling organizations to optimize IT procurement as well.

Among the organizations that are using the cloud to improve IT procurement is Cimpress, the parent company of Vistaprint, which is well-known in North America for its on-demand printing services. Cimpress is using AWS Marketplace, which is the Amazon cloud's marketplace for software-as-a-service (SaaS) offerings, to improve how the company is able to innovate and buy IT services. AWS Marketplace has listings from more than 1,600 software vendors from which users can choose. According to AWS, there are currently over 300,000 active customers for AWS Marketplace services.

Related: Cloud Costs Inching Up, Most IT Shops Use Hybrid Architectures, Survey Finds

In a user session at AWS Summit Americas last month, Jeremy Potash, director of technology at Cimpress, outlined how his organization is using the cloud and AWS Marketplace to improve its operations.

The Cimpress IT Organization

Potash runs a team of engineers at Cimpress that handles operations, including deliverability and observability for the company's website operations as well as its bare-metal and cloud services. Cimpress has more than 20 brands around the world, including Vistaprint, with businesses that provide services for customized printing on demand.

Related: Hybrid Cloud: The Benefits of NOT Going All-In

Cimpress has a Cloud Center of Excellence operation, which seeks to use the cloud as a common operating platform wherever possible. At Vistaprint in particular, Potash said the company is now going through a transition from just having a monolithic website to an approach where operations all run on the AWS cloud.

Within Cimpress is an IT operation that provides services to the company's different operating units. The services platform has been built from the ground up in AWS, with more than 300 linked accounts, Potash said. The core model in which services are provided is a SaaS approach.

"We basically have a policy that unless there's a really good reason not to take something off the shelf in a SaaS consumption model, we do everything as SaaS," he said.

Cimpress today works with a wide range of SaaS vendors, including Splunk, Databricks, Palo Alto Networks, Sumo Logic, Snowflake and Hashicorp, among others. Many of those SaaS subscriptions were purchased via the AWS Marketplace, Potash said.

Across the Cimpress business units are people building a lot of different types of technologies for specific use cases, according to Potash. Those business units all want to operate autonomously and at their own speed, which is something that Potash and his team enable by embracing SaaS.

"Operating in that [SaaS] model brings us a lot of benefits, which includes speed, it preserves our entrepreneurial spirit, and allows us to innovate," he said.

One key challenge that Cimpress faced when first taking the SaaS-first approach was how it was going to support its own users while still having some top-level management control. Potash said he didn't want his team to be a bottleneck but still needed to be able to make sure that the right resources were getting to the right teams in a cost-effective manner.

With AWS Marketplace, Potash and his team created a curated catalog of SaaS applications from which individual Cimpress business units can pick and choose. Since Cimpress is already a large user of AWS with many linked accounts, Potash said SaaS purchases are being made within the context of an account for which Cimpress already has a cost accountability structure created.

"People can purchase software where they're already consuming cloud services, and we're already set up to account for that, so that's a big plus for us as it helps with cost accountability and visibility," he said.

Potash noted that Cimpress was already dealing with many different independent software vendors (ISVs) directly for SaaS purchases. In adopting an AWS Marketplace approach, he said Cimpress has been able to maintain those existing relationships.

Cimpress is still able to have custom pricing and terms in place for its software consumption, while gaining the management control and visibility across its distributed enterprise that AWS Marketplace provides.

"We expect to outpace our 2020 [SaaS] purchases, so this is continuing upward, and a lot of that is because of the benefit that we've been seeing from strategically leveraging AWS Marketplace and routing purchases through there," Potash said.