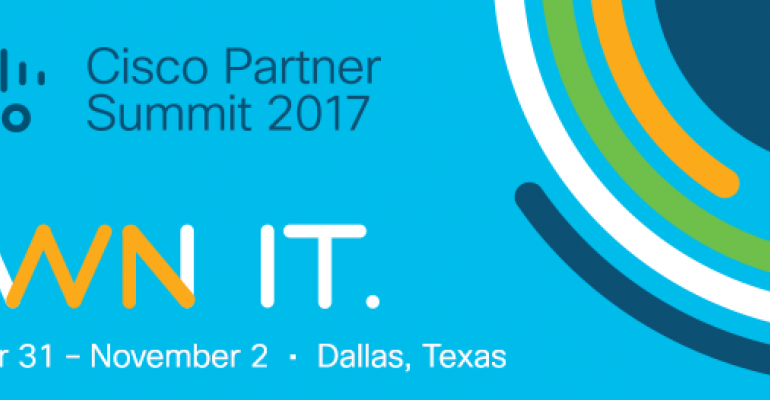 Amid a flurry of announcements at Cisco Partner Summit 2017 last week, one central theme emerged: This is not the hardware-based Cisco of yesteryear many VARs built their businesses on.

Last week, Cisco held its Partner Summit 2017 in Dallas, Texas, and announced a slew of new offerings, partner programs, and strategic focuses. From intent-based networking to incentives surrounding software and services, the networking giant is hammering home the message that today’s Cisco is a different beast from the hardware-based behemoth of the past.

Here are the top six takeaways from the Summit.

1. From Switches & Routers to Software & Services This year’s Partner Summit made one thing crystal clear: The days of Cisco counting on hardware sales are long past. Today it’s all about software and services, and enabling its channel partners to develop unique solutions that include software-enabled hardware bundled with subscriptions into suites.

The company’s latest Catalyst 9000 series of switches, part of its intent-based Network Intuitive initiative, are its first to come with integrated software subscriptions. Cisco is counting on what it calls its “ecosystem” partners such as ISVs to work together with its traditional reseller base to develop their own intellectual property on Cisco networks. Its Solution Partner Program has seen a 20 percent increase in ISV partner participation in the last year, Robbins said, and the company is placing heavy emphasis on the programmability of its networking solutions.

Pivoting to software and services will allow Cisco to tap into the outcomes-based opportunity provided by digital transformation and the rise of the line of business (LOB) buyer and move away from commoditized products to solutions that provide ongoing revenue. Cisco CEO Chuck Robbins repeated a quote from an IDC analyst during his opening keynote remarks at this year’s Partner Summit: “Cisco has fallen in love with networking again.” While offering a token objection to “again,” Robbins confirmed Cisco’s renewed energy around delivering next-gen networking solutions with its intent-based Network Intuitive offering.

Cisco is taking a “new” approach to network architecture that combines security, networking, and advanced analytics with machine learning capabilities to deliver an “intelligent” network that can anticipate threats and evolve over time. The solution is built around a subscription-based model to further build up its recurring revenue business.

David Goeckeler, the executive vice president & GM of Cisco’s networking and security business, emphasized the company’s focus on expanding beyond its enterprise base into the SMB market with a new initiative called Web Scale, which leverages automation to define a new path to networking profitability for partners that’s all about simplicity and scalability.

The sheer number of devices that will need to be connected to the network in the next couple of years requires a rethinking of Cisco’s value proposition, which he says is shifting to include elimination of manual processes, anticipation of security threats, and focus on a new set of KPIs to measure profitability in the IoT era that are all about time: time needed to deploy policy changes, update infrastructure, and detect network issues and malware. For the last two years, Wendy Bahr, SVP of Cisco’s Global Partner Organization, has been ruthlessly evaluating, consolidating, and streamlining the company’s partner programs. During Partner Summit 2017, Cisco unveiled the fruits of that “brutal and honest” process, as Bahr described it to Channel Futures.

Cisco reduced the number of specializations it offers from 27 to 11 in all, including consolidating its 10 entry-level Express specializations into one track for new partners needing a foundational training in core Cisco technologies like networking and security. It also reduced its midtier Advanced specializations from 13 to five and added a new Master Networking Specialization that covers software, security, programmability, analytics, and automation. The new specialization is part of Cisco’s refocus on intent-based networking and will be available in March.

The efforts to simplify don’t stop at specializations, however. Bahr and her team also tackled the deal registration and incentive side, reducing Cisco’s 15 different programs down to two. As part of the company’s hard pivot toward software and services, it’s now incentivizing partners to secure, expand, or renew a SaaS deal for security, collaboration, data center, or enterprise networking sales with a new VIP Annuity program. In addition, its added a VIP Activation that gives back-end rebates on Cisco ONE, Digital Network Architecture (DNA), Identity Services Engines (ISE), and Stealthwatch deployments.

Finally, there’s the new Cisco Migration Incentive Program (MIP) that gives an incremental discount on qualifying hardware, software, and services migration opportunities. The goal here is to incentivize Cisco’s existing install base to begin integrating emerging technologies into the solutions they sell. One of the most buzz-worthy announcements out of this year’s Partner Summit was the launch of ConnectWise Unite with Cisco, a joint program that aims to grow Cisco’s recurring revenue efforts by building its presence among MSPs.

The move gives Cisco partners that want to build a managed services practice a standalone, single pane of glass solution to simplify the process of managing, monitoring, and billing customers, while simultaneously making Cisco’s enterprise solutions accessible to the ConnectWise’s large SMB market base.

Cisco is betting big on the fast-growing SMB managed services market, and the new Unite platform is designed to help its traditional partners transition to a managed services model to grow its recurring revenue stream. On the flip side, ConnectWise partners will now be able to bundle Cisco solutions rather than having to individually deploy, integrate, and manage each offering.

ConnectWise is offering a free trial of the Unite portal to partners in North America and EMEA through January 1, 2018, with a global rollout planned over the next 12 months. Partners that register for the trial will receive access to enablement content beginning November 13, 2017. Cisco Spark is getting an AI upgrade. The new conversational assistant, Spark Assistant, is based on the machine learning technology it acquired earlier this year when it bought MindMeld Inc., which uses AI to enhance chat and voice assistants. The new feature allows users to launch Spark or WebEx meetings using voice commands.

While its capabilities are somewhat limited at the moment, Rowan Trollope, SVP and GM of Cisco’s Applications Group, said future iterations will offer new and more advanced features such as the ability to track action items. Eventually, Spark Room 70 will roll out availability across all Spark clients and hardware devices.

"We had to do some interesting things that are quite different from what you think about when you think about a virtual assistant like a Siri or a Google Home in that this is a team assistant and it's something that can interact with teams," Trollope said in a closed briefing session with media and analysts during last week’s Cisco Partner Summit 2017. "It's a virtual team member. That means it has to solve some quite different problems." The partnership reflects the focus on multicloud initiatives Cisco talked up at the Summit, which Greene called a huge opportunity for partners.

As end user customers increasingly realize that the cloud “isn’t a place you ‘move’ to,” in Robbins’s words, but instead a complex web of applications, cloud services, and public and private cloud platforms, they will turn to partners for guidance and advice.

Greene told the audience that Google will be relying on the Cisco channel to drive adoption of the new solution. “Our success is completely tied to your success,” she said.

In addition to giving Cisco an ‘in’ to next-gen public cloud capabilities such as the Kubernetes container orchestration platform, the partnership plays into Cisco’s strategy for enabling partners to develop their own intellectual property combining the Google Cloud capabilities with Cisco’s foundational on-prem networking, hyperconverged infrastructure and security offerings. Early field trials are slated for the first half of next year.