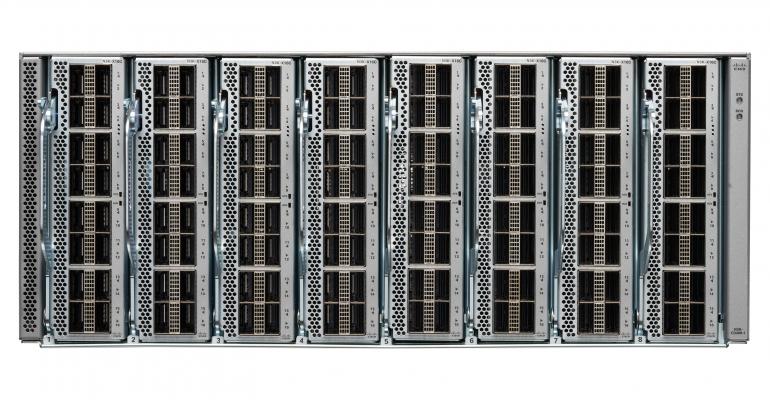 Cisco announced its first set of 400G data center network switches • Two of the switches are aimed at hyperscale cloud platforms, while the other two are for tech-savvy enterprises, and service providers • There is pent-up demand for 400G among hyperscalers, and all big network vendors are expected to ship the technology in 2019

Related: Data Center Networks are Getting Faster and Smarter

These next-generation 400G (Gigabit Ethernet) switches have four times more throughput than the networking giant’s current 100G offerings. Cisco expects to ship them in the first half of 2019.

“We think 400GbE is the next frontier,” Scheibe said. “One hundred gig has been reality for three years, and 400 gig is about to become reality.”

Related: The Year of 100GbE in Data Center Networks

Network equipment vendors are all racing to bring their 400G data center switches to market. Arista Networks announced plans for its first 400G switches last week, while Juniper Networks released details of its forthcoming 400GbE switches in July. Cisco, for its part, previously demonstrated its 400GbE switch technology this past summer.

“Everybody who sells to hyperscalers – whether that be Cisco, Juniper, Arista, or the white-box ODMs – will need to have 400GbE data center switches in their portfolio in 2019,” Brad Casemore, IDC’s VP for data center networks, told Data Center Knowledge. “There’s really no alternative, and that’s why you’ve seen a succession of 400GbE announcements from Juniper, Arista, and Cisco respectively. From a sales standpoint, they will all reach market at about the same time, but nobody wants to get outmaneuvered by a competitor.”

Hyperscalers have been the primary drivers for 400G demand, he said. But other segments of the market, including telecommunications service providers rolling out 5G networks and high-end enterprises in verticals such as financial services, will also adopt the technology.

“Hyperscalers will be first, and they will buy in the greatest volumes, creating the sort of economies of scale that will make 400G more affordable for subsequent buyers,” Casemore said.

Scheibe from Cisco agrees, saying there is pent-up demand among the biggest cloud providers. “All the very large cloud providers will go into trials the first half of 2019, and in one shape or another they will start deploying a 400GbE network in the second half of 2019,” he said.

Among service providers, telecommunications companies will use the 400G switches to build edge data centers as they build out their 5G networks, he said. That will allow the service providers to provide faster service to their customers, while providing high performance in a small footprint.

“They need a compact network solution at the edge,” Scheibe said.

Cisco’s two new Nexus 3400-S switches for hyperscale companies will be available for customer evaluations in December. The Nexus 3432D-S switch is a 1RU switch that offers 32 400G ports, while the Nexus 3408-S switch features an eight-slot 4RU chassis that allows for a mix of 100G to 400G connections. Both feature a single 12.8Tbps chip with a 70MB buffer.

According to him, Cisco rises above its competition because its switches not only provide faster network speeds but also real-time visibility into network packets, flows, and events. That allows for improved security, automation, visibility, and analytics, he said.