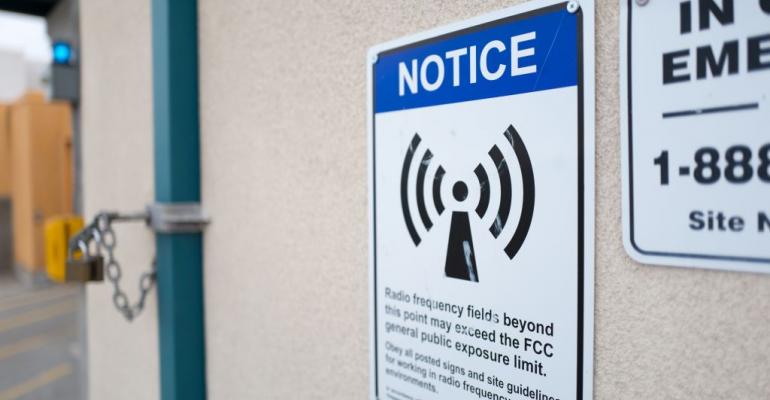 DCK Investor Edge: Managing director Jon Mauck on compute at the tower, hyperscale demand, and the advantages of “patient capital”

Riding the wave of 5G hype, edge computing has been getting a lot of attention, being a big piece of the puzzle that needs to be solved before the power of 5G is fully unleashed.

Several pilot projects are underway to test edge computing at the tower and figure out what the data center designs and network topologies will be necessary to support ultra-low latency machine-to-machine communication for things like autonomous vehicles and smart cities.

At first glance, it would seem natural that a company like Digital Bridge, which owns both data centers and wireless towers, would be hard at work consolidating those assets into a unified platform that provides end-to-end infrastructure solutions extending from core data centers all the way out to edge computing at the towers. But things aren’t that simple, it turns out. While it is leveraging the fact that it’s both a tower and a data center company, Digital Bridge isn’t in a rush to build mini-data centers at its wireless sites.

Digital Bridge owns two data center companies and a wireless technology company and operates hundreds of thousands of wireless sites in the US and Latin America (the bulk in the US). Last year, together with Colony Capital, it launched Digital Colony Partners, a $4.05 billion infrastructure fund which two months ago teamed up with another infrastructure fund, EQT Infrastructure IV, to strike a deal to acquire the network and data center heavyweight Zayo Group for $14.3 billion.

In a recent interview with Data Center Knowledge, Jon Mauck, managing director at Digital Bridge, shared his thoughts on viability of edge computing at the tower, hyperscale data center demand in 2019, and the advantages of having “patient capital” fund strategic growth.

Mauck joined the company in 2015, bringing over 20 years of infrastructure underwriting and data center operation experience. He now sits on the boards of both Digital Bridge-owned data center brands: DataBank and Vantage Data Centers.

Edge Economics: Not pulling punches, Mauck said economics of edge data center deployment at the tower were still unproven. “The ROI on deploying infrastructure to the tower has not reached an “inflection point,’” he said.

The economically viable “edge” remains at data centers in tier-two markets, which he described as “NFL cities.” Those would be colocation data centers operated by the likes of TierPoint, Flexential, EdgeConneX, or Digital Bridge's own DataBank – facilities that help content and cloud providers extend their networks closer to more end users but stop short of housing compute infrastructure that’s one or two short network hops away from your smartphone.

Digital Bridge will continue to monitor 5G for new applications and devices that could spur the need for a cell-tower edge, he said.

Hyperscale Bookings: In 2017 and 2018, hyperscale cloud platforms leased record amounts of data center space in North America. This year, the dynamics are different.

Mauck confirmed what we’ve been hearing from others in the space: there isn’t nearly as much urgency by the largest hyperscale platforms to sign mega-data center leases (the kind sold by Vantage) in the US in 2019 as there was in the previous few years.

There are several reasons for that: 1) The exponential growth of the cloud drove the urgency during a frenetic 18-month period, partially driven by the hyperscale preference expand in facilities close to their existing ones; 2) They are still “digesting” the massive amount of space they leased during that period; 3) Cloud service providers have a better handle on forecasting growth than they did before.

Hyperscale bookings will continue to be lumpy, Mauck explained. “There was no slowdown in cloud demand, but [data center] capacity is already in place in key markets.”

Patient Capital: The key advantages of being a large privately held firm versus a publicly traded one are the opportunity for a more efficient capital structure, and the ability to focus and execute on a long-term strategy without the pressure of publishing annual guidance or reporting quarterly results.

Each of the Digital Bridge’s business segments is "formidable,” Mauck said, “having scale to stand alone and compete.” However, the brands share market intelligence, “giving Digital Bridge the ability to collaborate to deliver the right answers for complex solutions required by customers.”

Consequently, “there is no urgency to consolidate the infrastructure or tower businesses with the data center-platform companies,” Mauck said.

Since 2013, privately held Digital Bridge has invested over $13 billion across the full spectrum of communications infrastructure including tower and data center assets.

If closed successfully (expected in the first half of 2020), the Zayo deal will add a massive data center colocation platform and a carrier business to Digital Colony's international portfolio. Colony Capital, Digital Bridge's NYSE-listed partner in Digital Colony, is a global investment firm with assets in Europe, Asia, and the Americas. 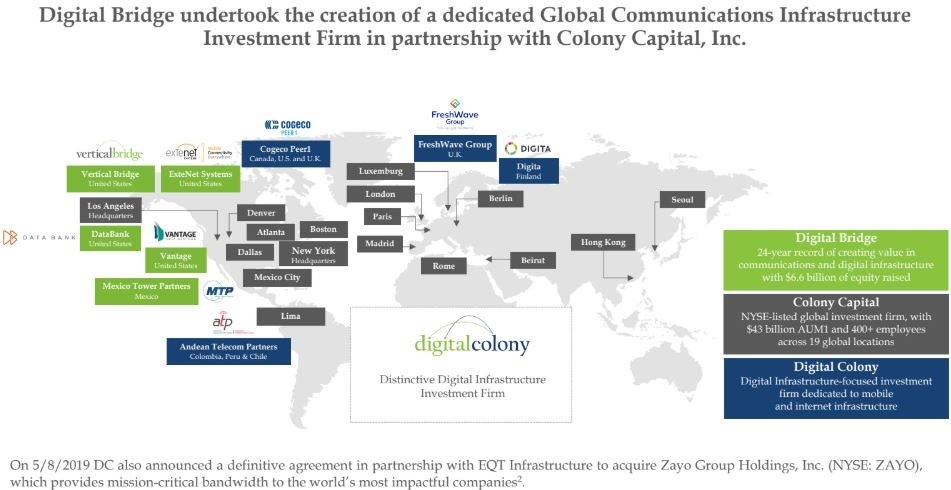 Zayo provides bandwidth infrastructure and metro connectivity to thousands of buildings in the US, Canada, and Europe. The Zayo network stretches over 130,000 miles, including a Tier 1 IP backbone. Its network solutions include dark fiber, private data networks, wavelengths, Ethernet, and dedicated internet access. 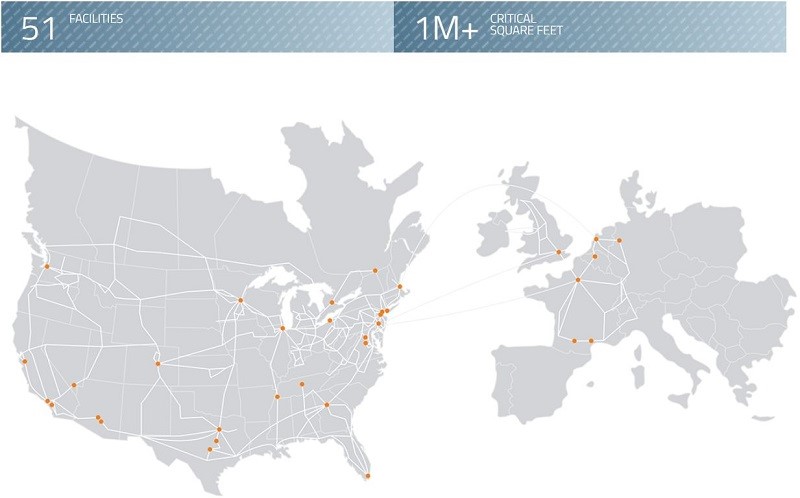 Zayo management appears to be looking forward to going private and pursue a long-term strategy without having to deal with the distraction of quarterly results and annual guidance. It’s also an opportunity to raise capital from institutional investors without the scrutiny of Wall Street analysts or the need to reveal that long-term strategy.

“As a private company, we will be owned by investors who understand our business, have the same long-term view as our employees and customers, and will bring added value to our strategic decisions. We will also be able to focus more of our efforts on running the business as we’ll spend less time reporting to and educating public investors.”

It’s also meaningful that the company taking Zayo private is one of the few that operate the entire spectrum of communications and data center infrastructure. The potential revenue and expense synergies derived from adding Zayo's assets to the mix of Digital Colony's portfolio companies will create a juggernaut that telecom and data center investors should watch closely.