The outperformance of a couple hot US data center markets masks the slow- to no-growth situation in other top-tier metros.

Northern Virginia remains the largest and most dynamic data center market in the world, with a record 270MW of wholesale leasing in 2018, according to a recent Jones Lang La Salle report. The Phoenix metro doubled net absorption of available data center inventory, to 51MW. (Come to Data Center World in Phoenix March 19-22 to learn the latest about the Phoenix market and to meet all the key players there.)

But the report also highlighted weak demand for wholesale data center space in many other US markets. While investor appetites for high-quality apartments, offices, and retail space in cities like New York, Boston, and Los Angeles are insatiable, the story is different with data center space.

High cost of power, land, construction labor, and taxes combine to make these urban centers unattractive locations for server farms to support large IT workloads. That’s why last year New York and Los Angeles had wholesale net absorption of only 1.2MW and 2MW, respectively. The Boston data center market actually lost 6MW on a net basis due to a large customer leaving the city, according to JLL.

Some markets that have seen a lot of data center growth just recently, such as Dallas and Chicago, were also flat year-over-year in 2018. Those two markets continue seeing most demand driven by enterprise customers (traditional businesses like banks and retail rather than cloud providers and social networks).

There weren’t many large cloud deployments in the Pacific Northwest, despite low cost of hydro power, and net absorption in Silicon Valley can vary year-to-year. The Valley is often constrained due to a lack of available supply making demand harder to predict. But JLL confirmed that Digital Realty, Vantage, CoreSite, and Equinix are all developing large data centers there that will be available in 2019 or 2020.

Raging Wire, EdgeCore, and CyrusOne have announced large projects in Santa Clara as well. Whether demand for wholesale space in 2020 and beyond will increase to meet the new supply coming online in Northern California remains to be seen. Lower-cost markets in nearby Reno and Phoenix are often competing for the same regional wholesale deployments.

The Uniqueness of Northern Virginia

The leasing of 270MW in Northern Virginia was unprecedented. JLL reported over 80 percent of 2018 absorption was comprised of deals over 6MW. Cloud accounted for nearly half of the deals, followed by social media – including a record 72MW Facebook lease signed with CloudHQ.

Northern Virginia's massive data centers are filling up faster than anticipated. In a recent conference presentation, Digital Realty CEO Bill Stein explained, "When we bought the 400-plus acres in Northern Virginia, we had just sold out our Building L, which is almost 100 megawatts of capacity. And when we underwrote that building, we expected it would take us three years to fill it up, and we ended up filling it in nine months."

The extraordinary leasing activity in and around Ashburn, Virginia, has driven up land prices and led to some massive land acquisitions. In a conference presentation in January, Allen Tucker, a managing director at JLL, shared a slide that detailed some of the larger "land banks" in Northern Virginia held by data center developers: 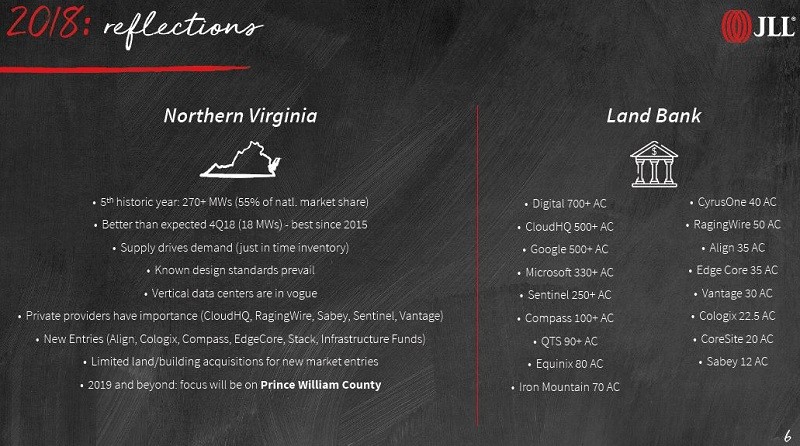 Notably, land owned by Corporate Office Property Trust, a REIT that develops powered shells for Amazon Web Services, was not included on the list.

These net-leased AWS powered shells are not even included in the 270MW net-absorption figure, but they do add to the growing land scarcity in the market.

Large-scale leasing in Northern Virginia is both a blessing and a curse for data center operators. The need to bank large parcels of expensive land as table stakes to compete for signing long-term leases with the investment-grade cloud and social media giants is not for the faint of heart.

The same can be said for Silicon Valley wholesale data center development, looking ahead to 2020, when there will be a plethora of multi-story data centers seeking multi-megawatt tenants.

Another market that bears watching closely would be Atlanta. Facebook is developing a $750 million-dollar campus there. However, according to the JLL data, only 4MW of wholesale leases were signed in 2018 by the incumbent colocation landlords. This is another market where new players including CyrusOne and Switch are currently developing large campuses to compete with established data centers owned by QTS Realty, T5 Data Centers, DataBank, Digital Realty, Equinix, Flexential, Ascent, and others.

Get the full JLL report here