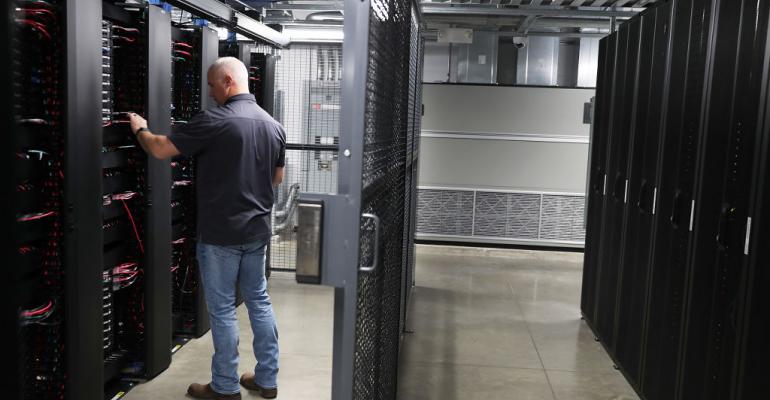 Joe Raedle/Getty Images
A staff member works among the racks and network switches in the data center of LightEdge Solutions in Altoona, Iowa.
Business

Adjusting qualifications in their job listings could be the ticket to a more abundant talent pool for data center operators.

Uptime’s new assessment of the data center labor market isn’t as alarming. “Although data center recruitment needs are expected to rise steadily to 2025, the growth in demand does not need to represent a crisis,” a newly published staffing forecast by the Institute reads.

The new report projects global demand for new data center jobs to increase by about 2 percent annually through 2023 and 3 percent by 2025.

“In terms of a ‘crisis,’ I know we’ve used that term in the past,” said Rhonda Ascierto, Uptime’s VP of research and principal author of the new report and the prior survey. “But looking at the numbers that we determined around demand requirements, this doesn’t necessarily have to be a crisis, because there are steps we’ve laid [out] (and so did many in the industry) that can be taken.”

One of the steps is to adjust data center job requirements to allow for “equivalent experience” as an alternative to a college degree or certification from a technical trade school.

Ascierto and her team identified 230 unique job profiles that are applicable to more than one global enterprise’s data center organization today. The team examined the job requirements for each of these roles individually and estimated that the amount of data center jobs where equivalent experience is accepted as an alternative to formal accreditation will grow faster than jobs that demand college experience. 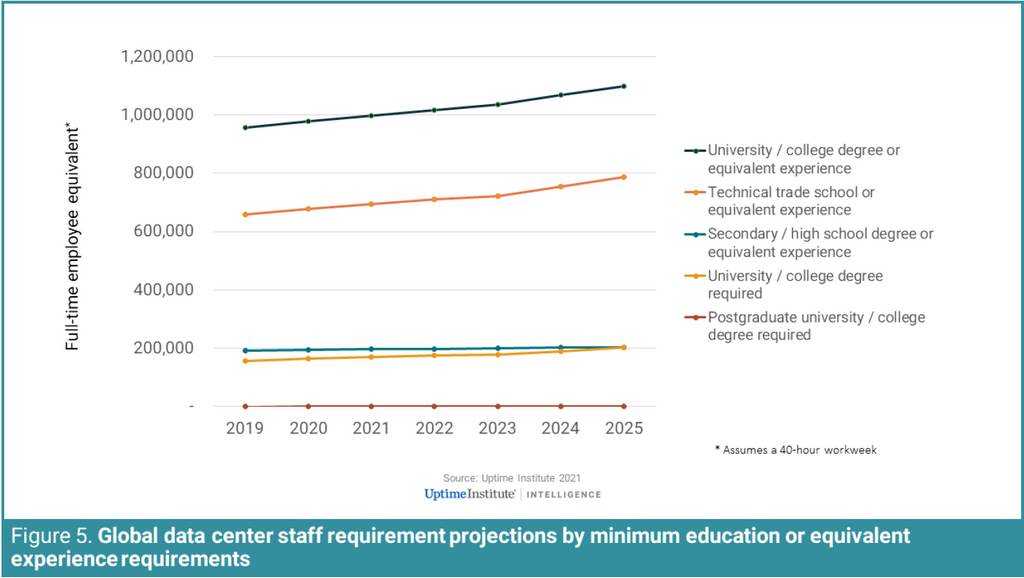 “In tandem with more educational training, including on-the-job training, that requirement for a four- or three-year university degree isn’t hard and fast,” Ascierto said. “There are ways to lower the barriers” and broaden the pool of labor available to data center operators.

It’s not that the staffing shortage situation has changed over a course of one year, nor is it an indicator that its severity, which was accurately predicted for years, has lessened. Rather, Uptime’s new report may be a signal of a kind of normalization — an acceptance that this is the sort of thing that happens in any sector where the value of specialization rises more quickly than the quantity of available specialists. It’s harder to keep sounding the same alarm year after year. What’s more, amid the wellspring of crises we’ve all faced this past year, perhaps a staffing shortage is the most tolerable.

In its 2019 Data Center Survey, when Uptime first rang an alarm about a looming staffing crisis, it suggested another solution, which is to diversify the extremely homogeneous workforce: “While most do not believe a lack of diversity in their ranks is an issue to be concerned about, Uptime believes actively recruiting women and other underrepresented populations into data centers will help to alleviate the staffing crisis.”

The Staffing Issues are Regional

“There aren’t enough people now, and in five years 30 percent are expected to gray out, so it’s going to get worse,” Carrie Goetz, principal and CTO of Jackson, Mississippi-based data center consultancy StrategicITcom, wrote in a note to DCK. “That’s why companies like Equinix, Microsoft, and Amazon are upskilling their people.”

But the problem with filling data center jobs isn’t evenly distributed from metro to metro. “The larger data center cities are pulling talent from other cities,” Goetz said.

The data center sector can’t be viewed “as one homogenous entity in terms of difficulties finding qualified staff for open positions,” Ascierto said. For example, it’s harder for a data center operator based in Chicago to find good talent for a remote location than for a local metro facility.

“Data center employers of all types and sizes and in many geographies… continue to struggle to fill open positions,” she continued.

For a large data center provider or a hyperscaler that problem may be exacerbated by the scale of their operations. They could simply be growing faster than their HR departments’ capacity allows.

Rethink the Meaning of ‘Qualified’

Uptime is suggesting that employers’ filters that screen out “unqualified” candidates may be due for a cleaning, or even replacement.

“You can’t do a mechanical engineering, electrical engineering, chemical engineering job for a data center, unless you have an engineering degree,” Ascierto said. “There’s no getting around that. You absolutely need that fundamental, formal training.” But “that’s actually a really small portion of the overall total.”

“More and more companies — Apple, for instance — are hiring based on skills,” Goetz said. “About 50 percent of their workforce is non-degreed. If a degree is needed for a professional engineer, that’s one thing. But there are a ton of people who don’t have degrees.”

Throughout data centers globally, Ascierto said, there is a shift in the employment profile away from specialized technicians and more towards generalists. These generalists, she believes, will be trained in general day-to-day operations, ordinary preventative maintenance, and emergency response. In the longer term, she predicts, operators will employ off-site experts who manage multiple remote teams simultaneously. Each on-site team may remain small yet comprised of people who are building up their experience through being remotely instructed.

This shift may be one tactic for responding to the demand for skilled IT labor outpacing the ability of the talent pool to keep pace with it. But this has been the pace of data center hiring activity for at least four decades.

A 1997 survey of American businesses (Uptime’s report is global) by the Information Technology Association of America (PDF) cited some 68 percent of companies responding as saying the lack of skilled workers impeded their growth. Some 71 percent said their demand for IT workers outpaced demand for other job categories. But 69 percent claimed most of their applicants tended to lack the skills they required. ITAA backed up their perceptions with college-degree data dating back to 1986.

“It is a challenge that will be with us as we move into the 21st century,” ITAA correctly predicted.

In 2009, as Computerworld reported at the time, business consultancy Nemertes Research produced a benchmark study showing about two-thirds of some 120 IT organizations reported being unable to locate personnel with the right skill sets. In that very same article, John Regan, then Director of Data Center Services with PwC and now Digital Infrastructure CTO of Landmark Dividend, acknowledged exactly the same problem Ascierto and Goetz pointed to. You could find degreed engineers for engineering jobs but couldn’t leverage that skill set for IT.

Even as we fast-forward to today, the “challenge” doesn’t confine itself to the IT industry.  An October 2020 report from construction industry staffing provider Tradesmen International surveyed about 1,000 construction labor contractors. Some 81 percent of that group reported their firms having a difficult time filling open positions. That problem may have been exacerbated by the pandemic, although the trade group cited the Great Recession of 2009 as having seeded the downward trend.

Those are numbers that can’t bode well for data center construction activity, even though demand for data centers may have been boosted, not hindered, by the pandemic.

What’s the construction industry’s coping strategy? According to the Tradesmen report, one-third of surveyed firms were allocating funds for re-educating their existing workforce “and nearly as many restructured or changed programming for current craft professional recruits.” In other words, they’re adjusting their criteria for “experience.”

So not even the prescribed remedy is new. In fact, most any industry you can name that uses skilled tradespeople may have been coping with its own version of the skills mismatch problem for at least the last half-century.

But this could be core of the problem: an economic holding pattern across all sectors of the economy, where unsatisfied demand for skill is always placing a damper on growth. It bears asking how long any industry can continue to keep coping this way before it declares a state of crisis.