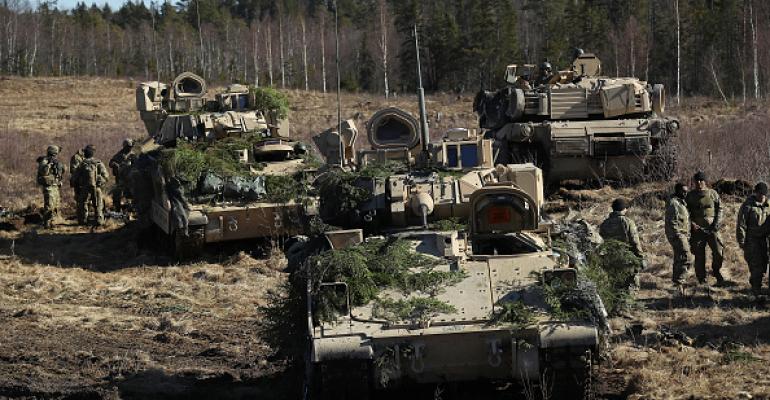 The U.S. defense contractor agreed to buy CSRA Inc. for about $6.8 billion to expand its computer-services offerings for government agencies and military customers. CSRA holders will receive $40.75 a share in cash, General Dynamics said in a  statement Monday, a 32 percent premium over the closing price at the end of last week.

The acquisition will make the company the No. 2 provider of federal IT services, trailing only Leidos Holdings Inc., General Dynamics said in a presentation. CSRA, which provides services such as cybersecurity and data analytics, gives General Dynamics more heft as defense spending rises under President Donald Trump and computer-technology contracts get bigger and more complex.

As defense outlays increase, General Dynamics’ government-services business should return to the levels of sales and growth that were typical before cuts begin in 2011, said Dan Johnson, chief of the company’s information systems and technology unit. He estimated the market’s value at $250 billion.

“It would appear that the market is starting to be populated with larger opportunities” requiring broader skill sets, he said on the conference call. “We think this is a marriage made in heaven to go after that marketplace.’’

The acquisition is the biggest ever for General Dynamics, surpassing its purchase of business-jet maker Gulfstream almost 20 years ago. The CSRA deal, expected to close in the first half of this year, will result in a computer-services provider with $9.9 billion in sales, General Dynamics said. That will vault the company ahead of Booz Allen Hamilton Holding Corp. as a provider of such offerings to the government.

CSRA was formed in 2015 from the combination of Computer Sciences Corp.’s government business with SRA International. The Falls Church, Virginia-based company provides civilian and military information technology including cybersecurity, data analytics and support for companies such as Microsoft Corp.

The General Dynamics-CSRA combination would surpass Leidos as the federal information-technology market leader based on their share of total government IT spending during the five years ending in 2017, according to Bloomberg Government.

“We believe that GD was attracted to CSRA for two major reasons: scale and deep expertise in leading-edge technologies,” Joseph Vafi, an analyst at Loop Capital Markets, said in a note to clients. “In combination, these two are a rare commodity.”

Raytheon Co. bought Websense Inc. in 2015 for $1.9 billion to address what the weapons maker called an “overwhelming” cybersecurity threat to companies and governments. Lockheed Martin Corp., by contrast, spun off and merged its IT business with Leidos in 2016.

With Lockheed moving away from the business, the General Dynamics-CSRA deal is a “headscratcher,” Krishna Sinha, an aerospace and defense analyst with Vertical Research Partners, wrote in a note to clients. Prime contractors generally aren’t cost competitive enough to win federal government IT work, he said.

“While we agree that Fed IT is ripe for consolidation, we still think it makes more sense for it to occur as a standalone entity, not as part of an equipment/platforms-focused prime contractor,” Sinha said.

General Dynamics’ Information Systems and Technology business, of which GDIT makes up about half of sales, was hit hard by defense cuts under former President Obama. Revenue at the IS&T unit fell to $8.9 billion last year from $11.6 billion in 2010.

Defense spending should rise now after Congress approved a budget deal earlier this month that includes raising the caps on defense spending by $80 billion over current law in this fiscal year and $85 billion in the one that begins Oct. 1.

The company, also based in Falls Church, expects cost savings from the combined IT business will be 2 percent of sales by 2020, or about $200 million. The acquisition will add to earnings and free cash flow in 2019, General Dynamics said.

The transaction has been approved by both companies’ boards. General Dynamics also will assume $2.8 billion of debt. Net debt will be about $10.5 billion following the deal and General Dynamics said it “anticipates retaining strong credit ratings.” At the end of last year, the company had net debt of $1 billion, which included $3 billion of cash on hand.