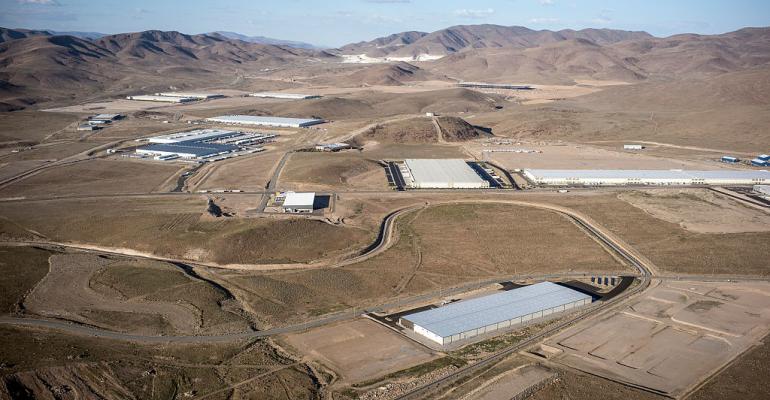 In Reno, Hopes of More Data Center Investment Thanks to Controversial Tax Break

Storey County’s Opportunity Zone designation is seen as a way to sweeten the pot for data center developers and investors.

One of the more controversial sites making use of Opportunity Zones, a federal tax break intended to encourage development in low-income areas – and being pitched to data center developers and investors – is the Tahoe Reno Industrial Center in Sparks, a northern Nevada town neighboring Reno.

The site, perhaps more famous for being home to the Tesla Gigafactory, a battery manufacturing plant, is also home to an enormous Switch data center and a construction site for a Google data center; hyperscale data center developer EdgeCore Internet Real Estate has plans for a 1 million-square foot, 225MW campus there. Cryptocurrency millionaire Jeffrey Burns’ company Blockchains, LLC has bought a lot of land in the area to build a community he envisions will be a sort of a high-tech blockchain-based utopia. (Blockchains doesn’t appear to have built anything except a single office building there so far.)

The Tahoe Reno Industrial Center, or TRI, organization said it has received a lot of interest from more potential data center operators because of the existing projects. While some data centers already on the site were built too early to take advantage of the Opportunity Zone program, there is still 68,000 acres of land owned by technology companies that hasn’t been built out, and those companies can potentially take advantage of the program, according to Kris Thompson, a TRI project manager.

“The potential for expansion is massive,” he said.

The degree to which the companies have been using the Opportunity Zone tax break isn’t clear, because they arrange their own financing, Thompson said. But the fact that the site is in an Opportunity Zone – which he calls the “O-Zone” – is on their minds.

“We typically don’t get any details about how companies are financing their project, but I can tell you, just from backchannel discussions with companies that own the land out here and companies coming out there, the Opportunity Zone is a big deal because of the massive savings it can afford,” Thompson said.

In particular, the Opportunity Zone designation gives smaller rural states such as Nevada more clout in competing to attract technology companies with bigger states like California, New Mexico, Arizona, and Texas, which have more money and can offer those companies more incentives, Thompson said. For example, each of the competing states was willing to give Tesla major abatements or other cost-cutting incentives, he said.

“What the O-Zone does is it really gives areas that were blighted or depressed or had high unemployment a real opportunity to compete, and it can really help in areas like rural Nevada,” Thompson said. “Things like an O-Zone can really help. It’s attractive to people just for the possibility that it’s there, or it can bring in investors who have the capital to help them put up their buildings.”

Opportunity Zones in general have been criticized for being more helpful to companies wanting to save money and rich investors wanting to save on their taxes than for the poor people they are intended to help. Part of the reason the Tahoe Reno Industrial Center in particular has faced criticism is that it was added as an Opportunity Zone later in the process, getting the designation instead of another parcel that some believed was a more appropriate low-income area, given that the TRI area already had seen major investment by Google and Tesla.

Tesla decided to site in the industrial center before Opportunity Zones came along. “As part of an economic incentive package granted to Tesla to locate its Gigafactory in Nevada, Tesla committed to invest $5.95 billion and create 6,000 new jobs,” noted a description for the Northern Nevada Opportunity Zone Summit in the Silver Legacy casino in March 2019.

“To date, Tesla has created over 7,060 jobs and has generated significant regional economic growth in Northern Nevada which has attracted more tech companies and development. Additionally, Tesla committed to use vendors located in Nevada which has prompted additional companies to relocate, and many more are coming.”

A tour of the Tahoe Reno Industrial Center scheduled during the summit was sold out.

With investment like that, critics wondered why that region of northern Nevada needed the benefit of an Opportunity Zone. The Washington Post wrote an article criticizing a number of Opportunity Zone locations and the process for naming them, specifically citing the Tahoe Reno Industrial Center.

According to Post reporter Damian Paletta, Storey County – where the Tahoe Reno Industrial Center is located – originally had too high a median household income to qualify as an Opportunity Zone, but after lobbying from Nevada elected officials up to and including then-Sen. Dean Heller and Gov. Brian Sandoval, the Treasury Department relented and allowed the state to name the county an Opportunity Zone, supplanting another county with a lower median household income. Partisan politics and political contributions may have played a role, Paletta suggested.

In a New York Times article reporters Eric Lipton and Jesse Drucker suggested that disgraced former financier Michael Milken, who owns property in the Reno area, was also involved in getting the Opportunity Zone designation, though several people denied he was involved – including Milken himself, in an op-ed in the Wall Street Journal. Economic development experts cited by the Reno Gazette Journal said they had made the decision to name Storey County an Opportunity Zone over the other area themselves, when they learned that it was indeed eligible, because they felt it would attract more investment that would end up helping the entire region.

In response to the criticism, Thompson noted that the industrial park region’s prosperity is a relatively recent development. “In rural Nevada, at the height of the recession, the unemployment rate was 22% -- almost Great Depression, Dust Bowl level,” he said. “Keep in mind that before Tesla came, as of 2013, we had 6,000 jobs here.”

Moreover, the recession hit Reno’s gaming industry hard. “Reno is the little brother or poor cousin of Las Vegas,” Thompson said. “In the gaming world, the recession hit Las Vegas hard, but hit Reno twice as bad.” While Tesla brought 10,000 jobs in 2014, it took a while for the area to recover from the devastation caused by the recession, he said.

“We’re in great shape now, but that only happened in the last year or two that our jobs went through the roof.”

In fact, between 2008 to 2013, the park made just a single sale, even with $250,000 a year in marketing expenses, Thompson said. Then, when Tesla came along in 2014, the Nevada Legislature held a special session to grant the company a major tax abatement. “The governor called it ‘the deal of the century’ in Nevada,” Thompson said.

Publicity surrounding the Tesla deal is what brought in several others – Switch, then Blockchains, then Google, Thompson said. The industrial center hopes that additional publicity around Opportunity Zones will do the same thing.

“Someone told me that data storage companies are like geese,” he said. “There’s a flock flying over, they see a little field down below, one goose will come down, and if it doesn’t get shot, the others follow. Once one company has a good experience, the rest of them flock in, and that’s exactly what happened.”

Read the first part of the series, which explains what Opportunity Zones are and what role they can play in data center investment, here and also part three, about a developer leveraging the Opportunity Zone designation of a former Air Force base site in Sacramento to pitch it to data center tenants and investors.