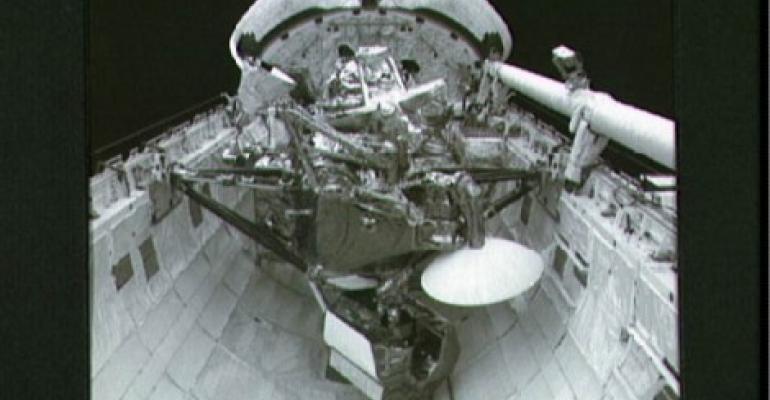 NASA via Getty Images
The Upper Atmosphere Research Satellite (UARS) sits in the cargo bay of the Space Shuttle Discovery in September, 1991 in space.
Business

(Bloomberg) — Add at least nine more months of delays before the U.S. Air Force can deploy a fully capable version of Raytheon Co.’s ground system for advanced GPS satellites, a project that was already running about five years late.

The ground system, which was supposed to be in operation by October 2016 under Raytheon’s contract, now isn’t projected to be ready until at least April 2022, the Air Force said in response to an inquiry by Bloomberg News. Extending the schedule will increase the projected cost of the system’s development phase to $6 billion, up from $5.4 billion most recently and $4 billion in 2015.

Raytheon’s “Operational Control Network” of 20 ground stations and antennas worldwide is needed to take full advantage of new GPS III satellites being built by Lockheed Martin Corp. that promise greater worldwide coverage, accuracy and cybersecurity. The Global Positioning System is widely used for everything from helping the military to pinpoint airstrikes against Islamic State to allowing civilians to map street-by-street driving directions on their smartphones.

The new satellites also have been beset by repeated delays, with the first launch now planned the second quarter of 2018.

“The Air Force has implemented improvements across the program, including at Raytheon,” Captain AnnMarie Annicelli, an Air Force spokeswoman, said in an email. “These include development of contingency efforts and modernizing software development processes. GPS is important to every American, and the Air Force must get it right.”

The Air Force proposed the delay in the ground stations to Pentagon officials in June during a major review of the troubled program. The service said it will need to find an additional $630 million after 2019 because of the latest delay, but has funds through fiscal 2018. The service must absorb the overrun under the “cost-plus” award fee contract it signed with Raytheon in February 2010.

After a 24-month delay set last year, “further analysis” resulted “in a more realistic schedule baseline extension of 33 months,” Annicelli said. “The increased schedule was due in part to realized program technical risks, and includes hardware and software obsolescence,” she said.

The network from Waltham, Massachusetts-based Raytheon was called the Pentagon’s “No. 1 troubled program” last year by the Air Force’s head of space systems acquisition.

“We remain on track to deliver this essential, advanced capability” based on an Air Force decision in March, before the Pentagon review, “to add an additional six months of margin,” Mike Doble, a Raytheon spokesman, said in a statement. He said he couldn’t address the Air Force’s latest “pre-decisional” extension.

Raytheon’s current schedule, even with doubling its staff to more than 1,000 personnel, assumes “efficiencies from software engineering improvements, such as increased testing automation, that have not yet been demonstrated,” the Government Accountability Office said in a a May report.