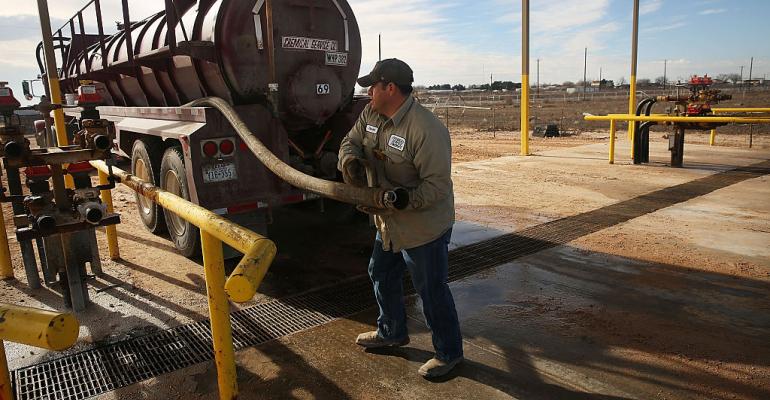 Spencer Platt/Getty Images
ANDREWS, TX - JANUARY 20: An oilfield worker fills his truck with water at a filling station before heading to a drilling site in the Permian Basin oil field on January 20, 2016 in the oil town of Andrews, Texas. Despite recent drops in the price of oil, many residents of Andrews, and similar towns across the Permian, are trying to take the long view and stay optimistic. The Dow Jones industrial average plunged 540 points on Wednesday after crude oil plummeted another 7% and crashed below $27 a barrel.
Business

David Wethe (Bloomberg) — A wave of next-generation upstarts is hitting America’s oil patch, offering high-tech solutions aimed at an industry in flux following the worst crude-market crash in a generation.

At a time when the five biggest oilfield servicers — still smarting from the price rout — have cut almost $1 billion from their research budgets, companies such as Ambyint Inc. are stepping into the breach. Ambyint uses iPhone-sized computers, digital signals and complex algorithms to control the flow of oil from older wells, boosting output and avoiding downtime.

The old guard is taking note. This month, Halliburton Co., the largest provider of fracking services, bought Summit ESP, a company armed with 44 patents for technology to improve production. That followed by two months Helmerich & Payne Inc.’s acquisition of Motive Drilling Technologies Inc., with 14 patents, another dozen pending, and software in hand that can robotically steer drill bits located more than a mile underground.

“We had the land rush to buy up acreage; now the land rush is going to be to start buying up intellectual property,” said Mark Mills, a partner in CVP, a digital oilfield venture fund. “The oil industry hasn’t been like that for a long time because it’s been locked into an old structure.”

While the oil industry has largely recovered from its three-year rout, prices have settled far short of the $100-a-barrel levels seen prior to the plunge. At $45 to $50 a barrel, explorers are looking for every bit of help they can get to keep costs under control.

In some cases, the new innovators offer unique software systems. In others, they’re fine-tuning existing hardware to smooth out the rough edges. And with less access to funding than their bigger rivals, the smaller companies have tended to focus on one issue at a time, allowing drillers to pick and choose the individual fixes they need, rather than being locked into a larger contract with one of the big servicers.

“The shale revolution is changing America,” said Kevin Shuba, the chief executive officer of OmniTRAX, a railroad logistics provider, in a telephone interview. “There’s a great opportunity for smaller companies to enter this space because of their flexibility and because of their ability to move quickly.”

Ambyint, a Canada-based provider of software and devices, was launched in 2014 by Nav Dhunay, previously known for his development of a home-automation technology system to control thermostats, lights and music remotely from mobile phones.

His latest technology is designed to remotely control oil flow from miles away in wells that have slowed with age, and on a variety of systems.

Many of the biggest players are “just continuing to do step-changes to what they’ve already got,” Dhunay said in an interview.

The successes of these smaller companies comes at a time when the biggest service providers have been retreating on their own in-house innovation.

When Baker Hughes Inc. blasted techno music and splashed lightning-fast graphics over a movie screen to a room full of energy analysts in a suburb outside Houston three years ago, the world’s third-biggest oilfield-services provider predicted its newly unveiled invention would someday replace the most iconic symbol in the century-old oilfield, the nodding donkey pump.

Today the Baker Hughes technology, called LEAP, has hardly been discussed on earnings calls, and has failed to displace the traditional oil pumps in any significant way. In the meantime, Baker Hughes cut its research spending by 37 percent, to $384 million in 2016 from $613 million two years earlier.

Halliburton has also slashed its research-and-development spending, dropping it by 45 percent to $329 million in 2016 from $601 million in 2014. And the two companies aren’t alone. Schlumberger Ltd., Weatherford International Plc, and GE Oil & Gas all reduced the amount of money they spent on research between 2014 and 2016.

In this low oil-price environment, Halliburton’s attention to patent spending is sharper than ever, said Greg Powers, head of technology at the company.

“What we patent has to be monetized,” Powers said in a telephone interview. “That’s not the time when you go burning the torch of the patent machine as hard as you can. It’s a really expensive enterprise. What we did was consciously dial back blockbuster programs.”

Many smaller contractors, meanwhile, have been ramping up their research budgets.

Dril-Quip Inc., a provider of subsea gear to the offshore drilling industry, saw its research and engineering budget grow to 8.2 percent of sales last year from 4.9 percent in 2014. In the same period, Tesco Corp., an equipment provider, more than doubled its ratio of research spending to sales to 4.2 percent from 1.8 percent.

To be sure, the biggest companies are not shutting down their patent machines entirely. Baker Hughes earlier this year unveiled a patented fracking device for deepwater oil wells which the company says will shave roughly 40 percent off the $100 million cost to stimulate an offshore well for production. The company, now majority owned by General Electric Co., can tap into GE’s FastWorks program to better emulate the feel of a Silicon Valley startup.

There’s generally a lag of about four years from the time that a company commits research dollars on a new device to when it shows up as a patent. So, expect oilfield patents from the biggest servicers to continue rising through 2018, when the drop in research spending finally shows up.

“It’s not the big guys who drive new technologies,” Robart said in an interview. “Big guys are great at incremental innovation and technology, but not so good at totally new technology.”