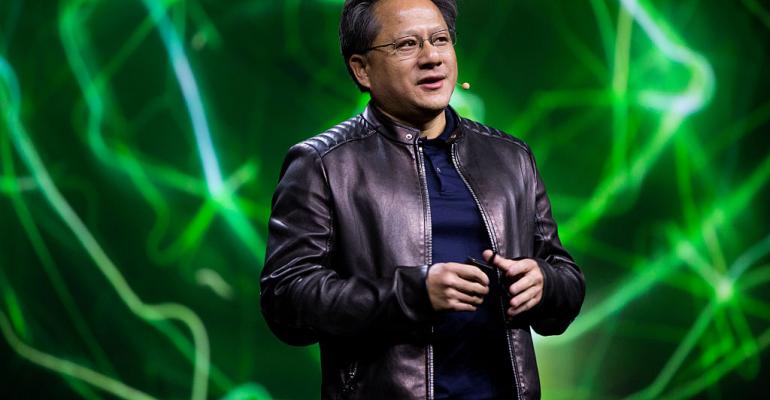 Ian King (Bloomberg) -- Nvidia Corp. gave a forecast for the current period that showed makers of gaming computers are beginning to order graphics chips again after working their way through an inventory buildup.

Revenue will be about $2.55 billion this quarter, plus or minus 2%, the Santa Clara, California-based company said in a statement late Thursday. That compares with an average analyst estimate of $2.53 billion. The stock jumped as much as 7.4% in extended trading, but pared almost all of the gains after Chief Financial Officer Colette Kress said on a conference call that the outlook for the server market had worsened since the beginning of the quarter. She said the market is hard to predict and Nvidia didn’t update its annual forecast.

Nvidia Chief Executive Officer Jensen Huang is trying to return his company to the growth it showed over the last five years, when revenue more than doubled. To deliver that, he needs for Nvidia’s main business -- the graphics chips used in gamer PCs -- to emerge from under a pile of inventory that’s held back new orders. In data centers, where Nvidia’s chips have begun to play an increasing role in artificial intelligence computing, Huang is looking for large companies such as Alphabet Inc.’s Google and Amazon.com Inc.’s AWS to return to expanding their infrastructure spending.

Huang was keen to tout the positive results.

“Nvdia is back on an upward trajectory,” he said in the statement. “We’ve returned to growth in gaming.”

Revenue in the quarter gained 1% from the prior period.

Nvidia’s run of consecutive revenue gains, which started in 2014, ended in the fourth quarter. Demand for graphics chips used by cryptocurrency miners dried up after the digital-coin market plunged. The resulting excess inventory caused a slowing of orders of the chips that are more typically used by PC gamers to get the most realistic video.

Huang said three months ago that the first quarter would be the bottom for inventory. The stock increased 20% this year to $160.19 at Thursday’s close.

In data centers, other chipmakers including Intel Corp., have posted weaker earnings and pointed to lackluster spending by cloud providers who are taking a pause after pouring money into new gear last year.

Nvidia’s revenue from data centers declined again in the fiscal first quarter, shrinking 10% to $634 million from a year earlier. Gaming revenue was $1.06 billion, a decline of 39% from the same period a year ago, but a gain of 11% from the preceding quarter.

The company cited the “near-term pause in demand for hyperscale customers” for the decline in server chip sales.