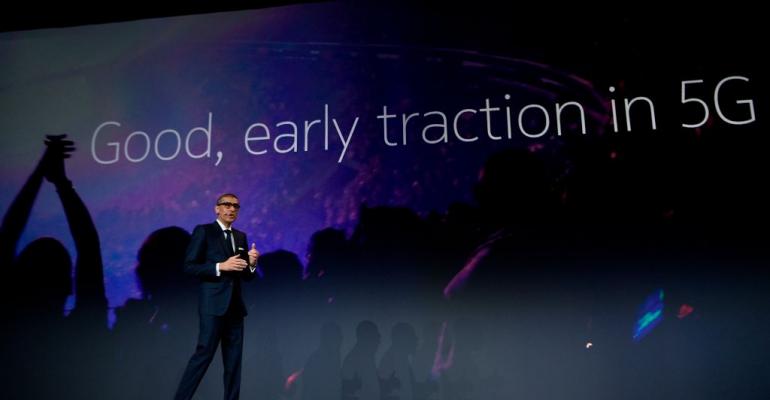 Even Trump’s campaign against China’s Huawei has failed to reverse its fortunes.

Pekka Lundmark, the 57-year-old CEO of Fortum Oyj, will take over from Suri at the start of September, the company said Monday. Nokia shares jumped as much as 4.9% in Helsinki.

“We see the CEO change as positive because in the current situation Nokia needs a bigger change, and that starts from the renewal of management,” wrote Inderes analyst Mikael Rautanen.

Nokia fell behind rivals just as the company was on the cusp of large-scale rollouts of fifth-generation mobile equipment. After problems developing proprietary chip-sets, it was forced to buy more expensive alternatives, adding to costs and eroding profits. Even Trump’s campaign against China’s Huawei has failed to reverse its fortunes.

Related: How Enterprises Could One Day Use Their Data Centers to Be Their Own 5G Providers

The 52-year-old Suri, Nokia’s CEO since 2014, has repeatedly asked shareholders to show patience for his 5G strategy to pay off. Investors will now have another six-month wait before new management is in place. Nokia is also set to elect Sari Baldauf as its new chairperson in April, replacing Siilasmaa.

In October, Nokia angered investors when it suspended its dividend to conserve cash for 5G investments and cut its earnings guidance, wiping 23% off the share price in a day. It’s also faced headwinds in integrating Alcatel-Lucent, which it acquired in 2016, and staff have complained internal politics are distracting managers.

“Markets have been very skeptical of whether Suri can continue in his role since the guidance cut last year,” Kimmo Stenvall, an analyst at OP Group in Helsinki, said by phone. “He hasn’t been able to deliver and add value to the company, especially in the 5G era, which is what he was expected to do.”

Suri, who has been at Nokia for 25 years, became CEO after running the Nokia Siemens Networks joint venture. He will leave his current position on Aug. 31 and continue to serve as an adviser to the Nokia board until the end of this year, Nokia said.

In Lundmark, 57, Nokia is getting a CEO who has “consistently delivered robust total shareholder returns, successfully renewed the company’s strategy, and positioned it to be a strong player in the transforming global energy sector,” the company said on Monday.

Lundmark, previously CEO of crane-maker Konecranes Oyj, spent a decade early in his career at Nokia in various executive positions.

He also has a track record of doing large deals, having engineered Fortum’s $6.9 billion acquisition of German utility Uniper with the help of investors Elliott Management Corp. and Knight Vinke Asset Management. The deal is seen closing this quarter.

“The process looks exceptional because it seems that the current CEO has been involved in searching for the replacement,” Stenvall said. “Replacing a CEO is always a lengthy process and given that Lundmark’s name has already been announced indicates that this change has been in the works for a long time now.”

Huawei’s massive R&D push is making it more expensive to stay competitive in phone network gear. Furthermore, while security fears surrounding Huawei may benefit Nokia and Ericsson in the near term, they have also drawn attention to the market dominance of the Chinese supplier and its two Nordic rivals.

That’s adding urgency to efforts by carriers and tech firms to standardize network hardware and software, a trend that could ultimately undermine profits of the big three global vendors.

The uncertain outlook for wireless hardware demand may be one reason why speculation of a takeover of Nokia by a U.S. company such as Cisco Systems Inc. has come to nothing for now. The networking provider is focusing its efforts on software and chips, putting it in a better position for long-term growth opportunities than big legacy hardware makers, Bloomberg Intelligence analyst Woo Jin Ho wrote last week.