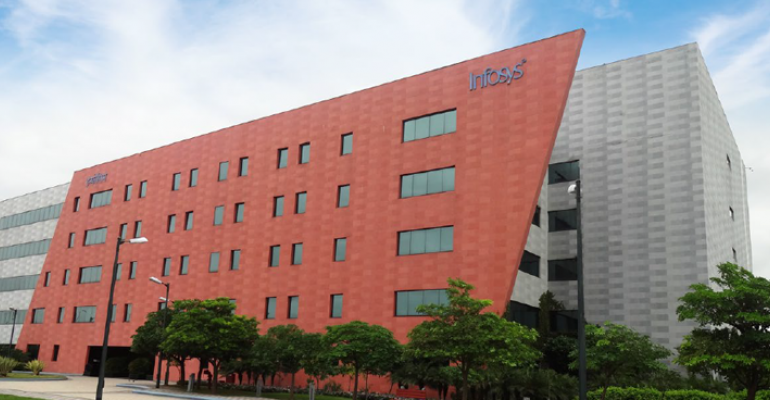 Saritha Rai (Bloomberg) -- Salil Parekh overcame long odds to become  Infosys Ltd.’s choice for its next chief executive officer. He now faces at least as challenging a task in getting the iconic Indian outsourcing company back on track.

The low-key, 53-year-old from  Capgemini SE was named to the helm of Infosys Saturday, beating out a field of internal candidates and former executives who had originally been considered front runners. Parekh will leave Capgemini’s executive board to start his five-year term at Asia’s second-largest outsourcer in the beginning of 2018. Infosys’ shares advanced 2.8 percent to 985.35 rupees in Mumbai, the biggest gain in more than two weeks.

He’s taking over a company in tumult. His predecessor, Vishal Sikka, quit after he came under intense fire from the company’s founders who objected to his strategy and compensation. Parekh will have to balance maintaining a genial relationship with strong-willed founders such as N R Narayana Murthy with taking bold steps to revive growth and restore employee confidence. Infosys is struggling to move beyond its traditional low-margin outsourcing business into more profitable markets such as digital services.

“Salil brings hugely relevant experience to Infosys,” Nandan Nilekani, another founder who returned as chairman when Sikka left in August, said in an interview. “He will fit into our culture and, at the same time, bring about the required transformation.”

The spat pitted the former CEO and the company’s board against the founders, and took a toll on the 200,000-person, $10 billion-in-revenue company. Sikka quit over what he described as “a continuous drumbeat of allegations” over management and corporate governance. The share price tumbled, wiping out billions of dollars investor wealth.

After the drama that Chairman Nilekani described as reaching “reality TV” like proportions, the quiet Parekh may be an apt choice. A few years ago, Parekh gave a presentation to the industry trade body Nasscom. His talk, after recapping the sector’s challenges, included a slide that read: “Stay calm, don’t panic.”

Parekh is unassuming to the point that his LinkedIn profile simply says he’s a “Business Manager” at Capgemini. Still, he has a blend of Ivy League credentials and operational experience that appealed to the board. He earned a degree as an aeronautical engineer from one of India’s premier engineer schools, Indian Institute of Technology in Mumbai --also Nilekani’s alma mater-- and has a master’s degree in computer science from Cornell University.

Parekh was a partner at Ernst & Young when Capgemini bought the IT consulting practice he was part of in 2000. He began working for his new employer out of a small warehouse in the Vikhroli neighborhood in Mumbai. Since then he has greatly expanded its operations in relatively low-cost India, spearheading its largest business unit and helping it compete on costs with competitors such as Tata Consultancy Services Ltd. -- as well as Infosys itself.

“He is down to earth and relates well to people,” said C.P. Gurnani, chief executive officer of rival outsourcer Tech Mahindra, in an interview. “His strengths are in strategy as well as execution.”

Colleagues at Cap Gemini say Parekh is amiable with strong social skills, but, in the end, he lives by the Capgemini slogan: “People matter, results count.”

Parekh is only the second outsider after Sikka to take the top job at the 36-year-old Infosys where only its co-founders, middle-class Indian engineers who started it with 10,000 rupees ($150), revolved through the CEO’s office. Since then, Infosys has been at the forefront of a $154-billion industry business that accounts for nearly 8 percent of the country’s gross domestic product. Infosys and its peers have pioneered a business model of building and maintaining computer systems for leading corporations such as Goldman Sachs Group Inc., Deutsche Bank AG and Avis Budget Group Inc. with the low-cost pool of skilled talent in India.

Parekh is a veteran of the Indian IT services industry unlike Sikka, who spent his entire career outside the country and came from a product background at SAP SE. The CEO nominee expanded headcount and sales at $15-billion Capgemini’s application services business. While adding clients in segments like financial services and cloud computing in places such as North America, he has always been based in Mumbai.

The outsourcing industry is now seeing slower growth and tightening margins, as clients adopt newer digital technologies like artificial intelligence, data analytics and Internet of Things. On top of that, U.S. President Donald J. Trump has stepped up scrutiny of work visas that Infosys and other outsourcers use to send engineers to oversee client projects in the U.S., which accounts for about two-thirds of their revenues.

Infosys dialed back its forecast for sales growth to 6.5 percent to 7.5 percent in U.S. dollar terms for the current fiscal year, down from the previous target of as much as 9.1 percent. It also abandoned Sikka’s dream of reaching $20 billion in revenues by 2020.

In the new, more challenging era of outsourcing, Parekh has valuable skills, Sudheer Guntupalli, an analyst with Ambit Capital Pvt., wrote in a Sunday morning note. Unlike his predecessors, he can bring the best of the consulting and outsourcing worlds, using consulting projects to help sell higher-margin services work, the analyst said.

“Parekh’s prior experience in managing digital technologies (cloud in particular) and turn around strategies (in North America in particular) will be an added advantage for current day’s Infosys,” Guntupalli wrote in the note.

The new CEO will also have more than $5 billion in cash to make acquisitions at a time of opportunity. That’s also where Parekh’s experience will come in handy. The executive presided over Capgemini’s $4.04 billion acquisition of IGATE Corp in 2015 and before that got Kanbay International Inc for $1.25 billion.

One of the first things Parekh will do when he finishes at Capgemini in Mumbai on Jan. 1 is move to Infosys’s base in Bangalore. That’s a contrast with his predecessor, Sikka, who continued to be based in Palo Alto for the three years he was managing Infosys. After that, Parekh may well adopt the strategy he outlined in the Nasscom presentation. Its title? “Making the most of the crisis.”