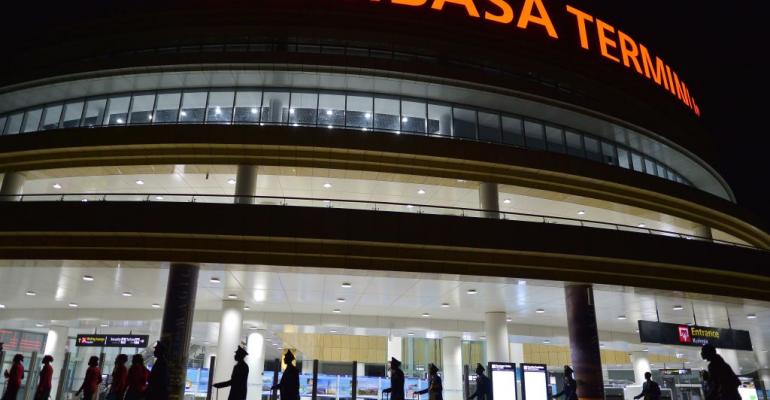 TONY KARUMBA/AFP via Getty Images
The railroad terminus in the coastal Kenyan town of Mombasa, where more submarine cables land than anywhere else along the African continent's east coast.
Business

Interxion’s move into the region suggests its meagre digital infrastructure may at last be seeing a start of meaningful investment.

European data center giant Interxion's move into East Africa suggests the region's meagre internet infrastructure may at last be starting on a path toward catching up with the developed world.

Investment in data centers and connectivity infrastructure south of the region has picked up dramatically in recent years, but the growth has been concentrated mostly in South Africa. Google is building a private submarine cable from Lisbon to Cape Town; Berkshire Partners just bought a majority stake in Teraco, reportedly South Africa’s largest data center provider; Microsoft Azure launched its first cloud data centers on the continent last year, in Johannesburg and Cape Town; and Amazon Web Services is gearing up to do the same this year by launching cloud data centers in Cape Town.

The situation in East Africa is starkly different. It is one of the most poorly connected regions on the planet, according to a DCK analysis of World Bank data. With its deformed telecoms market, obstructive legal and trade systems, underdeveloped power infrastructure, a small digital workforce, and little money, eager investors are counting on governments to take the steps necessary to make data center and network building possible.

Last week's UK-Africa Investment Summit in London demonstrated that momentum is gathering. African leaders joined UK Prime Minister Boris Johnson in a declaration of commitment to develop infrastructure, on the premise that it is necessary for economic growth. Politicians and academics have invested great hope in the idea that a digital economy will lift African people out of poverty, and that internet connectivity will help people overcome crises like the one that in recent days hit drought-hardened farmers in East Africa, where a swarm of locusts threatened to become a plague, making people fearful of famine, displacement, and the conflict those things could bring.

The biggest obstacle to those trying to build digital infrastructure in the region has been a lack of investment, Ranjith Cherickel, chief executive of Icolo, Kenya’s largest data center operator, said as Interxion prepared to announce its takeover of his firm in December. Icolo, by Cherickel's account, pulled itself up by its own bootstraps, with injections of cash, equipment, and skills from Interxion, which has been making them since the Kenyan operator was founded in 2015. (Interxion itself is in the process of being acquired by the US data center giant Digital Realty Trust.)

That was a leap since records began in 2010, when Interxion's business partner, the Amsterdam Internet Exchange, set up in the Kenyan port town of Mombasa, where international internet cables land. At the time Kenya had just one internet server per million people, and most other parts of East Africa had too few to reckon in the statistics. But even today, Kenya makes only half the average for Africa and the Middle East as a whole, while the world average is 30 times greater.

Still, more submarine cables land in Mombasa than anywhere else along the continent's east coast. Four are live today, according to Telegeography, and two more are expected to come online between now and sometime next year. This concentration of cable landings may parially explain Interxion's move into the market. The company's gatekeeper position in Marseille, where it controls access to a multitude of cables connecting Europe to Africa, Middle Eastes, and Asia, has paid off handsomely. If it manages to secure a similar degree of control in Mombasa, it will become a gatekeeper for network access to all East African markets.

Signs of change can be seen murmuring across the continent like a shale gas earthquake, rumbling beneath the soil. The number of local internet exchanges (IXPs) acting as interconnection points for terrestrial cables (which experts say are the essential infrastructure Africa needs in order to achieve the aims set out in forums like the Africa Summit) doubled in the last 10 years, according to a DCK analysis of data supplied by the Packet Clearing House Internet Exchange Directory. That means most African countries now have at least one local IXP – though most of them have just the one exchange. They've been growing by about two or three per year for the last two decades.

The Coastal Drag on Inland Markets

The growth is most marked in those coastal places, where economies are stronger, and where the international cables land. The further inland you go, to the landlocked central-African states like Chad, the Democratic Republic of Congo, and the Central African Republic, the fainter the communications infrastructure. These, aside from odd enclaves like North Korea, are the least connected places on Earth. South Sudan, the troubled inland East African state, is among them. It didn't get its first internet server until 2016. By 2018 it had 15. The US, by comparison, had 22 million at that point.

The other landlocked East African countries – Uganda, Burundi, and Rwanda – have been wrenching themselves out of the dark. They had among them, at last count, between 4 and 40 servers per million people. Their isolation, however, is not merely a consequence of their landlocked borders. All of them got their first internet exchanges (one and only, for Uganda and Rwanda) nearly 20 years ago.

Their coastal neighbors have played a part in their confinement. The government-owned comms backbone in Tanzania, in particular, has a "pernicious impact" on the landlocked East African countries, subject expert Michael Kende said in a report he wrote with others for the World Bank last year.

Tanzania's government monopoly forestalls private investment in the backbone network, so it is measly, unreliable, and expensive. Yet coastal Kenya and Tanzania have a near complete monopoly on international communications transit to and from the rest of East Africa. And since most African internet traffic relies on international transit, and most African web content is served from outside the country, the other countries are made to pay a high price for it. Users in landlocked African countries typically pay twice as much for internet access.

Tanzania's own retail communications market has been privatized and thrives. Others wanting to lay cables pay high prices for right-of-way. Backbone quality and reliability problems in Tanzania carry down the line. When Kende wrote his report last year, the whole of East Africa had just six commercial data centers. Most data centers in Africa are owned by telcos. Backbone networks mostly connect their major cities. Private investment is wanting. Yet these nations cannot afford to build communications infrastructure to connect their people.

The World Bank proposed they create a single digital market, to create an opportunity big enough to attract private infrastructure investors. At a greater scale, the infrastructure costs would be spread, prices would come down, demand would increase, internet traffic would rise, and the economy would grow.

A single market would require removal of regulatory and commercial barriers that stop networks spanning borders, raising network quality in landlocked countries, and lowering their connectivity costs. Essential to the plan is cutting restrictions on network access between network operators. The region needs more IXPs and data centers to connect national backbones and other operators, so it could rely less on international transit for its internet. More interconnects would create a shared infrastructure that would lower costs, increase scale and investment, lower prices, and increase the number of people in East Africa with internet access. This would have a snowball effect, as the high cost of doing business has prevented data center operators from investing in the first place.

The UK proposed solving some of these problems by helping African countries create conditions that would encourage investors to put up the money.

Interxion's venture, which has involved a gradual increase of its involvement and stake in Icolo since 2015, culminated in December with not only the takeover, but a strategic partnership with a South African infrastructure investment fund. If Interxion’s merger with Digital closes successfully, it will be able to leverage Digital’s substantial access to low-cost capital.