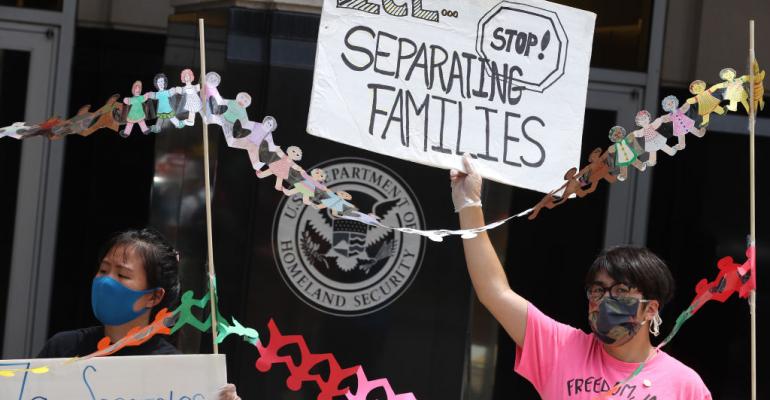 Chip Somodevilla/Getty Images
Protesters rally in front of the US Immigration and Customs Enforcement headquarters, demanding the release of immigrants in ICE detention due to the dangers posed by the coronavirus pandemic July 17, 2020 in Washington, DC.
Business

The agency is looking for a contractor to manage its existing AWS and Azure systems and expand its access to new cloud services.

Christopher Cornillie (Bloomberg) -- U.S. Immigrations and Customs Enforcement is planning new large-scale expenditures on cloud computing with Microsoft Corp. and Amazon.com Inc.’s Amazon Web Services unit. The deal, slated for early 2021, could could reignite tensions within the companies, where groups of employees have objected to working with agencies that have presided over family separations and raids targeting undocumented immigrants.

ICE officials are in the market for “cloud infrastructure hosting in AWS and Microsoft Azure environments,” according to a Homeland Security Department website listing upcoming contracting opportunities. The agency is looking for a third-party contractor to manage its existing systems stored in AWS and Microsoft cloud computing infrastructure, as well as to expand its access to new cloud services offered by both companies.

The estimated price tag of the project is at least $100 million over five years. While Microsoft or Amazon wouldn’t pursue the contract on their own, each could see tens of millions of dollars in new revenue through the deal. Microsoft representatives declined to comment on the matter; representatives for Amazon and ICE didn’t respond to requests for comment.

Immigrant rights groups have criticized Silicon Valley for working with the Department of Homeland Security, which includes ICE and U.S. Customs and Border Protection, or CBP. A 2018 report commissioned by three such group— the National Immigration Project, the Immigrant Defense Project, and Mijente—accused Microsoft and Amazon of supporting ICE operations by storing databases used to profile suspected undocumented immigrants. The groups also criticized Amazon for offering third-party cloud services to companies like Palantir Technologies Inc., which holds data-mining contracts with ICE.

In July 2018 more than 100 Microsoft employees penned an open letter to chief executive officer Satya Nadella demanding that the company “cancel its contracts with ICE, and with other clients who directly enable ICE.” Last October, its employees circulated a letter calling on the company to withdraw from a contract between ICE and Microsoft subsidiary, GitHub.

Some Amazon employees have also objected to their company’s relationship with ICE, which comes by way of its partnership with Palantir. In both 2018 and 2019 employees wrote open letters to executives demanding that the company sever ties with Palantir and other companies that enable ICE. Alphabet Inc.’s Google, another major cloud provider, has faced similar backlash, with employees organizing in opposition to contracts with President Trump’s Department of Homeland Security and the U.S. military.

Google decided against renewing one contract with the Pentagon; other than that the companies haven’t given in to pressure. In October, Google Cloud head Thomas Kurian defended the company’s work with CBP after documents detailing a $200,000 contract became public, and all three companies have made it clear at various times that they will continue to work with U.S. government agencies. The internal dissent mostly emerged in response to Trump-era policies, and it’s unclear how they’ll fare once he leaves office. But the tension could well persist. Much of the federal government’s immigration enforcement and detention infrastructure pre-dated the Trump Administration, and Democrats have also shown enthusiasm for technological solutions to immigration enforcement, like digital surveillance in lieu of a physical border wall.

It’s difficult to pinpoint exactly how much agencies like ICE spend on cloud services with Microsoft and Amazon. Although federal agencies are required to publicly report spending on many government contracts, Microsoft and Amazon receive most of their government revenue as subcontractors, where reporting tends to be inconsistent.

ICE spent more than $20 million on Microsoft products and services during the federal government’s 2020 fiscal year alone, according to data from Bloomberg Government. About half of that spending, $9.9 million, represented transactions for Azure cloud services. AWS and its partner companies received more than $21 million from CBP in fiscal 2020 and about $850,000 from ICE since March 2018. Palantir earned more than $24 million in contracts with ICE during the 2020 government fiscal year. In late April 2020, CBP signaled its interest in its own multimillion-dollar cloud deal that would provide access to services from Microsoft and Amazon, as well as competitors International Business Machines Corp., Oracle Corp., Google and Salesforce.com Inc.