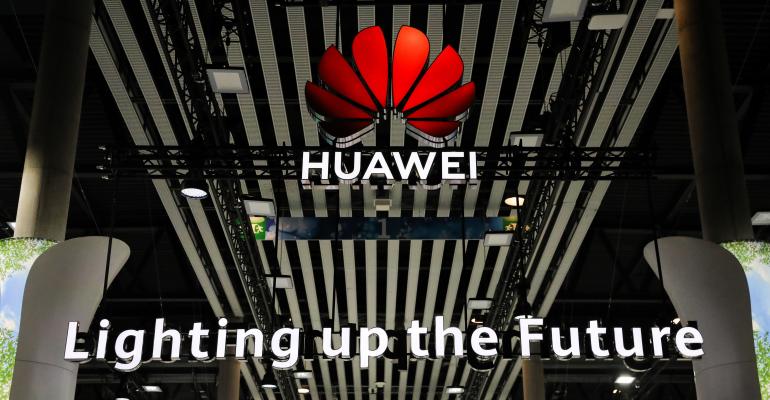 (Bloomberg) -- Few companies devote more of their revenue to research than Huawei Technologies Co., for which developing new technologies is a matter of thwarting crippling U.S. trade and investment sanctions.

China’s largest tech giant almost doubled its R&D budget over the past half-decade to $22.1 billion in 2021 -- more than any company in the world outside America. That’s 22.4% of its sales that year: nearly double Amazon.com Inc.’s and Google-owner Alphabet Inc.’s proportions and more than triple iPhone-maker Apple Inc.’s. Only Meta Platforms Inc. came close among the so-called Faang contingent with 20.9%, data compiled by Bloomberg shows.

That growing war chest underscores Huawei’s do-or-die effort to develop chips, networking gear and even smartphones free of American technology, barred since 2019 after Washington accused Huawei of jeopardizing U.S. national security. The sweeping sanctions wiped out nearly a third of revenue in 2021, inflating the ratio the Chinese firm spent on research -- though that’s still up in absolute terms from the previous year.

“The true value of Huawei lies in the R&D capabilities we have accumulated though our constant, long-term investment in research,” Meng Wanzhou, the eldest daughter of billionaire founder Ren Zhengfei, said in March during her first briefing since emerging from house arrest in Canada on charges of violating U.S. sanctions. “It’s in the company’s basic law that we will spend 10% of our annual revenue in R&D.””

Huawei, which isn’t publicly traded, was one of just six companies worldwide that spent more than $20 billion on R&D last year, Bloomberg data show. Its tally rivaled Microsoft Corp.’s and came in about $1 billion less than Apple and $2.5 billion shy of Meta. That approach has paid dividends so far -- the Chinese networking giant received 2,770 U.S. patents last year, putting it at No. 5 behind perennial leader International Business Machines Corp., according to an independent study.

Amazon and Alphabet towered over all with total outlays of $56 billion and $31.6 billion, respectively. The median among the 15 companies in the SuperTech Index was $2.9 billion.

While sanctions imposed during Donald Trump’s presidency have hobbled its smartphone business and barred its 5G gear across parts of Europe and Asia, the company has managed to raise capital by selling off assets and relying on its industry-leading IP portfolio. In 2021, Huawei sold its Honor phone unit to a state-led conglomerate, and unloaded its x86 server business on another Chinese consortium.

But there are limits to its spending capacity.

While Huawei’s 2021 research budget doubled from five years earlier, based on its annual reports, the yearly growth slowed. Meta quadrupled its own spending -- a function of its new focus on developing metaverse technology. Amazon more than tripled its own R&D budget, according to calendar-year figures compiled by Bloomberg, reflecting different fiscal periods.

The Chinese firm said it had 195,000 employees in 2021, of which 107,000 -- 55% -- “worked in R&D.” An accurate comparison of technical staff is difficult as various companies use different definitions. By comparison, about 60,000 or a third of Microsoft’s employees are classified as R&D staff, according to its annual report.

“The problems Huawei faces right now can’t be solved by cutting expense,” Guo Ping, the former rotating chairman and now chairman of Huawei’s supervisory board, told reporters during the briefing. “Huawei can not acquire advanced technologies, we have to increase investment in technology development.”