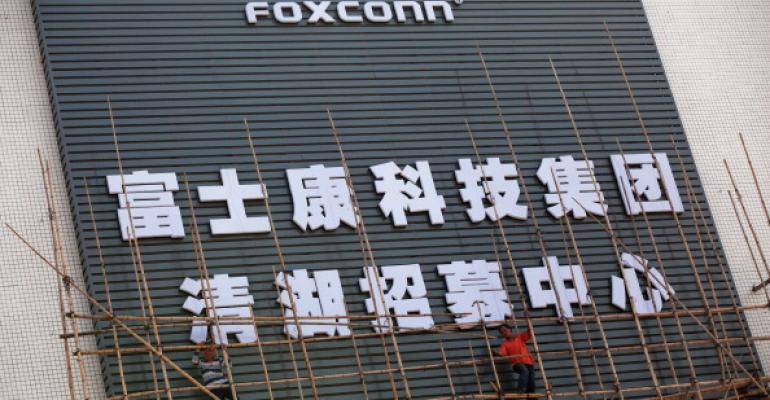 Foxconn parent's chairman seeks to transform the contract manufacturer into a more influential force in the global technology industry.

(Bloomberg) -- Hon Hai Precision Industry Co. Chairman Terry Gou, best known for assembling Apple Inc.’s iPhones, plans to increase its focus on artificial intelligence and big data over the next few years as he seeks to transform the contract manufacturer into a more influential force in the global technology industry.

Gou, at an annual gathering in Taipei for employees and family members Sunday, said the company has a great deal of work to do through 2020 to adapt to the sector’s new realities. He will expand investments in AI, automation and the Internet of Things to position his companies even more centrally in the tech supply chain.

The comments came a day after a Hon Hai unit, Foxconn Industrial Internet Co., said it expects to spend 27.3 billion yuan ($4.3 billion) on next generation projects and hold an initial public offering in China. Those efforts will include cloud computing, IoT solutions, AI manufacturing and fifth-generation wireless technologies, the firm said in an application prospectus on the China Securities Regulatory Commission website. Hon Hai is moving into sectors beyond pure electronics assembly as growth in the global smartphone industry sputters.

“There will be a big amount of work to do in the next three years because as the world runs faster thanks to the internet economy, the old successful rules can be overturned,” Gou said before an audience of more than 10,000 at a Taiwan exhibition center often used for concerts and other entertainment. “If we don’t keep moving forward, we will be eliminated.”

Gou and his Taiwanese company must strike a delicate balance between China and the U.S. Most of Hon Hai’s facilities are in mainland China where the company depends on solid relationships with government officials. Foxconn Industrial Internet is the first Hon Hai unit to list on a domestic exchange.

At the same time, Gou has met with U.S. President Donald Trump and agreed to build a $10 billion display factory in Wisconsin. In July, the state’s governor and Gou signed a memorandum of understanding that calls for up to $3 billion in government assistance and the sale of at least 1,000 acres of land.

Hon Hai’s annual gathering is a chance for Gou to speak about his priorities to employees and the media. This year, he put an emphasis on how their company will manage technology trends touching virtually all corners of the industry.

“In the last year, we made preparations for the next transformation of the company,” he said. “In the next three years, from 2018 to 2020, we will solidify our plans as the company moves toward the industrial internet, big data, artificial intelligence and platform economy.”

Hon Hai and its affiliates took control of cash-strapped Japanese display maker Sharp Corp. in 2016 and pledged to revive the hundred year old brand. The company has reported five straight quarters of net income and is expanding into new technologies such as high-resolution televisions known as 8K, which the company says display images 16 times the resolution of HD TVs.

Gou said his company is in discussions about a possible joint venture with Red Digital Cinema, a U.S. company that makes high-end film cameras that shoot up to 8K images. The effort may make such gear more affordable for professionals and the general public.

Gou spoke emotionally about the earthquake that hit Hualien in Taiwan this month. He talked about giving money to the recovery effort, but also that he wants to help develop technologies that will do even more.

“On the night when the Hualien earthquake hit, I thought of donating money,” he said. “I donated a good size of money in recent years, but can the donation help to reduce earthquakes? Can it predict earthquakes? Big data and AI not only can be used in manufacturing, it can also help us in areas like earthquake prevention. Technologies can help solve problems our society is facing.”