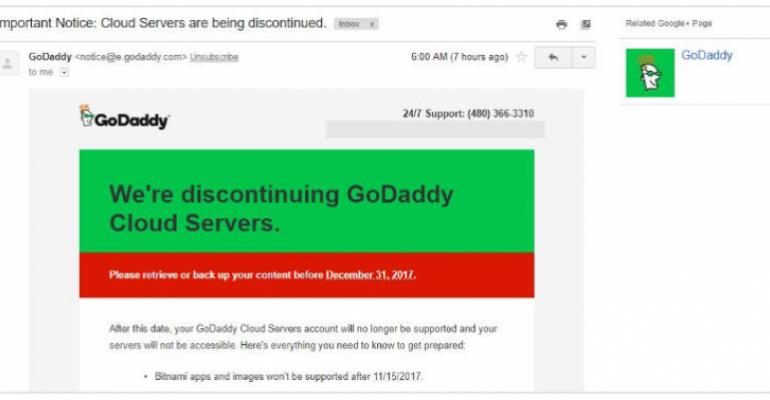 GoDaddy is shuttering Cloud Servers, its public cloud service. I know what you’re thinking. “GoDaddy is in the public cloud business?” Therein might lie the problem.

Launched only a year ago, Cloud Servers was never intended to go after the big guys — AWS, Azure, GCP, and the like — and had no dreams of competing for well-heeled, big-business customers. Instead, it was hoping to position itself as a gateway to the cloud for small and medium sized businesses wanting to test the waters. In other words, it was hoping to take on DigitalOcean and Linode. It was also undoubtedly hoping to leverage the substantial base of its hosting business and convince some of those customers that their lives would only improve if they made a move to the cloud.

It based its cloud offering on the open source OpenStack platform that’s widely used in private and hybrid clouds. It also entered into a partnership with Bitnami, which gave potential customers an easy way to install apps in its cloud. Server configuration options and such were rather limited compared to the larger full-service clouds, but that was part of its design, to be oh-so-easy to use. When Cloud Servers rolled out in March of last year, it supported 26 languages, was available in 53 countries, and accepted 44 currencies for payment. GoDaddy was serious about this new cloud endeavor.

Evidently that didn’t work as well as the company had hoped. Last Thursday, media reports started coming out that GoDaddy was shutting its cloud down. The company made no formal announcement, and news sites only found out about the planned closing when Cloud Servers’ users began receiving notices informing them the service will stop being supported on December 31. Bitnami-supplied apps and development environments will make an earlier departure, losing support on November 15. The notice of course prompted a discussion on Twitter.

“After serious consideration, we have decided to end-of-life our cloud servers’ product. Our goal from the beginning was to create simple and scalable services for small and medium business owners. We’re proud of what we built and now we are focusing on building a robust and scalable solutions based on OpenStack infrastructure.”

Only two days earlier, on July 18, GoDaddy announced it was selling — for $456 million — the German-based hosting business, PlusServer, that it acquired in April as part of a $1.79 billion acquisition of Host Europe Group. That sale wasn’t entirely unexpected, as GoDaddy had indicated when it acquired HEG that keeping PlusServer wasn’t in its plans.

The shuttering of Cloud Servers will likely have no more of an effect on the overall cloud economy than when HPE and Cisco disconnected their OpenStack-based cloud services. Probably even less. GoDaddy’s service appears to have never really been a player to begin with, but merely an idea that didn’t pan out.

It also wasn’t the company’s first try at being a public cloud provider. In May 2012 it launched a cloud service, also called Cloud Servers and also targeting SMBs, which it shut down five months later. At least this time they made it past the year mark. Maybe the third time will be the charm.