GDS
Rendering of a new data center campus GDS is building in Shanghai. The company announced the project in July 2017.
Business

America’s trade war with China has disrupted the global IT supply chains, but it doesn’t appear to have had much of an impact on GDS Holdings, which builds data centers for China’s hyperscale cloud platforms. Demand from Chinese internet, ecommerce, and cloud services companies continues being the primary driver for GDS’s development program, which continues full-speed ahead.

“We are in a period when there are all kinds of macro factors which may affect the market,” GDS chairman and CEO William Huang said on the company’s second-quarter earnings call earlier this month. “We do not know how long it is going to last, and where it will go. However, the digital economy in China is still strong.”

He then cited figures by IDC Research, saying the Infrastructure-as-a-Service market in China was growing 86 percent year over year, forecast to grow 45 percent annually on average over the next five years.

Meanwhile, a lack of state-of-the-art data center facilities in China's high-barrier to entry tier one markets resulted in a record level of preleasing for the data center provider in the second quarter. Hyperscale platforms are competing to have adequate expansion room located near urban cores of major Chinese cities to house latency-sensitive workloads.

This August, Synergy Research released a report highlighting a decrease in capital spending by China's four largest hyperscalers. According to the report, “Alibaba, Tencent, JD.com, and Baidu all reduced their capex spending substantially, leading to a 37 percent year-on-year reduction in Chinese hyperscale capex.” 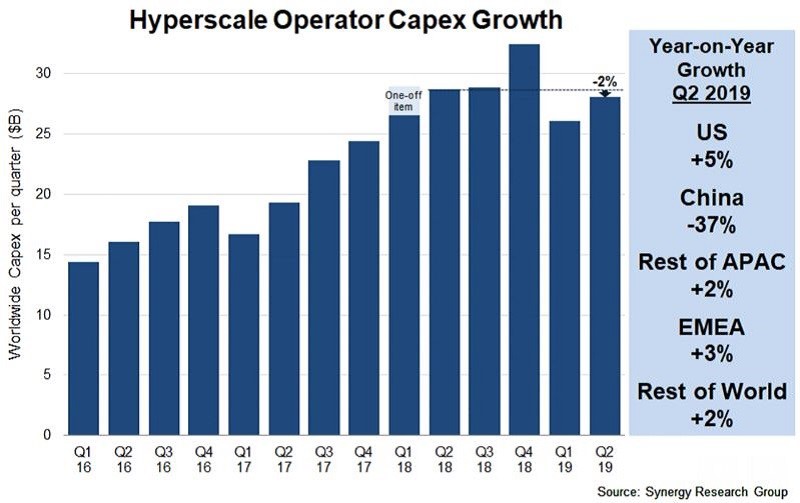 But John Dinsdale, chief analyst at Synergy told Data Center Knowledge via email earlier this month that the drop in spending will be short-lived. “Whatever happens at a macro level, cloud usage will continue to surge, more and more purchases will be made online, and social media will continue to flourish,” he said. “All of that needs an ever-larger IT infrastructure to support it. Our conclusion is clear: hyperscale capex levels in China will bounce back.”

GDS has not missed a beat and remains on pace to replicate the 874,000 square feet leased last year. The company reported 225,000 square feet of new bookings totaling 52MW of IT capacity during the second quarter, representing $90 million in recurring annual revenue.

“During the second quarter, our new business is up with the run-rate for the past six quarters,” Huang said. “We did two big deals of over 20MW, each with two existing hyperscale customers. We also did one deal over 5MW from a brand-new large enterprise customer, a market leader in China providing smartphone solutions.” 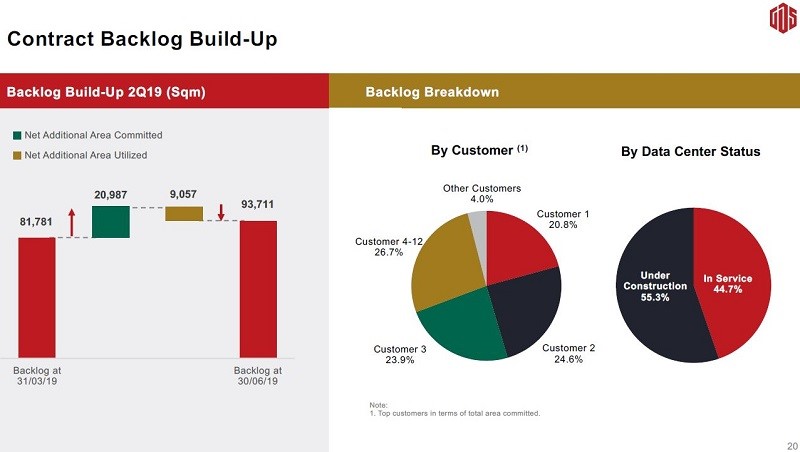 The company currently has 843,000 square feet under construction, which is 55 percent preleased, compared with 30 to 40 percent in the previous twelve quarters. The increase was driven by hyperscalers committing to take down space earlier and a larger number of greenfield construction projects underway this year.

The initial JV program involves seven data centers to be built at three campuses owned by one customer totaling 130MW. GDS will build the data centers and contribute them to the venture to recycle 90 percent of the capital investment and retain a 10 percent ownership stake. GDS will also receive fees from the JV for operating the facilities.

GDS has become a part of resource planning for its largest customers, which often plan their capacity three years advance. Huang estimates that 90 percent of the Chinese cloud market consists of domestic cloud service providers. Although 86.5 percent of GDS revenue is generated from the Cloud and Large Internet verticals, US-based Amazon and Microsoft only account for five percent of the developer’s revenue.

In the short term, relentless growth of the GDS data center fleet will be a drag on some key metrics. However, as these data centers are commissioned and start generating revenue, the operating leverage will continue to drive better performance. During the first-quarter earnings call in May, CFO Dan Newman estimated that GDS net income would become positive by 2021 – perhaps by the first half of the year. 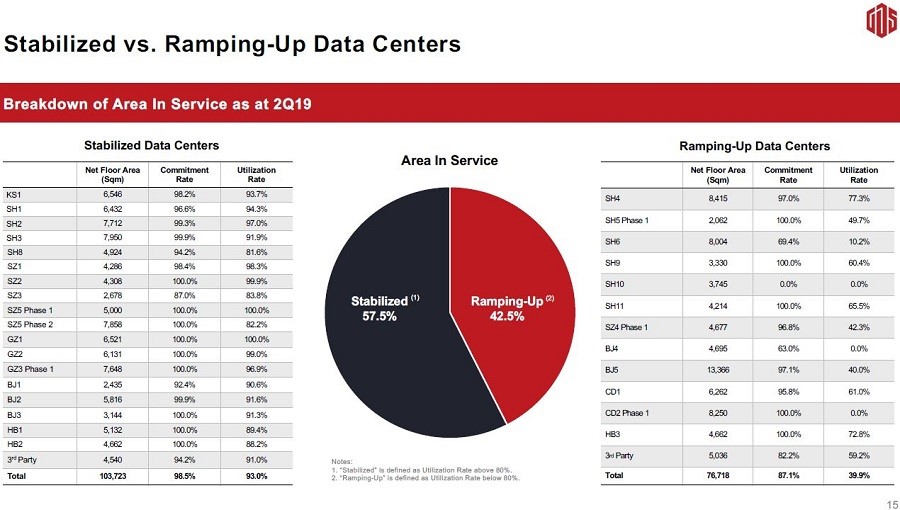 The GDS bookings backlog has increased each of the past three quarters, and the current development program is 66 percent pre-committed. When these stabilized properties are put into service, it will naturally increase GDS’s profitability.

Notably, Newman mentioned on the second-quarter call that even GDS management was surprised at how quickly operating leverage had driven adjusted EBITDA margins up to 44.3 percent – a nine percent improvement year-over-year. Newman's long-term goal is to reduce the corporate SG&A down to five percent of revenues – which he believes would be the lowest overhead for any data center operator and should drive higher margins in the future.

Unlike the US-based publicly traded data center REITs, GDS shares (American Depository Receipts, or “ADRs”) do not pay a dividend. However, for investors looking for an opportunity to capitalize on the rapid growth of the digital economy on the PRC side of the Great Firewall of China, carrier- and cloud-neutral GDS is an attractive option.