Gartner: Data Center IT Spend Surged in 2018, But the Surge Won’t Last

The analysts say the spike in spending will be short-lived, as companies shift budgets to SaaS.

Companies spent about 11 percent more on data center IT systems last year than they did the year before, by Gartner’s estimates. But don’t expect a similar splurge in this category this year – or next – the analysts said.

Enterprises are shifting their spend from on-prem data center infrastructure, smartphones, and PCs, to cloud services – especially Software-as-a-Service – and Internet of Things devices. Of all these spending areas, enterprise software has and will continue growing the fastest, Gartner predicts.

And, despite all the market wobbliness caused by recession fears, the Brexit process, and the trade spat between China and the US, IT spending as a whole is likely to grow again this year, John-David Lovelock, a Gartner research VP, said in a statement. “IT is no longer just a platform that enables organizations to run their business on. It is becoming the engine that moves the business,” he said. 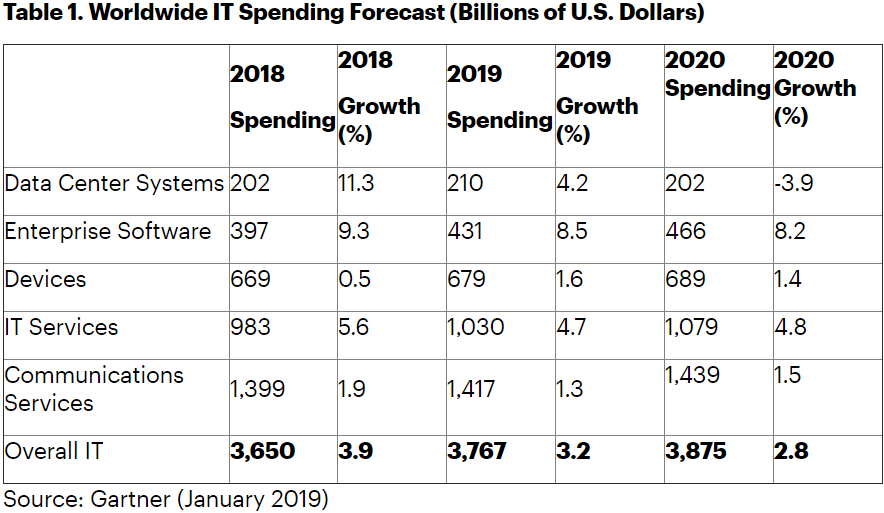 The analysts expect spending in this category to be up 8.5 percent in 2019, and 8.2 percent in 2020. They also expect companies to shift more of their software budget from on-premises applications to SaaS.

These estimates include spending on data center systems by hyperscale cloud providers like Amazon Web Services and Microsoft Azure, Lovelock explained in a note to Data Center Knowledge.