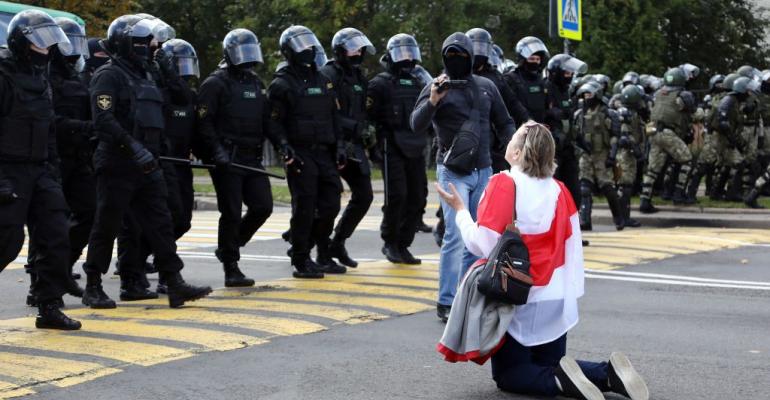 Photo by -/TUT.BY/AFP via Getty Images
A woman kneels in front of law enforcement officers during a rally to protest against the presidential election results in Minsk on September 13, 2020.
Business

The company says its investigation determined that “custom code” was inserted into its products “to thwart the free flow of information during the Belarus election.”

The company’s technology, which is used to filter and manage internet networks, was used by a state-run internet agency in Belarus to block thousands of websites in the country amid nationwide protests over a disputed election, Bloomberg reported on Aug. 28.

Sandvine said in a statement on Tuesday that a preliminary investigation determined that “custom code” was inserted into its products “to thwart the free flow of information during the Belarus election.”

By ending the agreement, Sandvine said it would stop providing software updates and technical assistance for its equipment being used by the state-controlled National Traffic Exchange Center, which manages all internet data flowing in and out of the country. But that doesn’t mean the equipment will cease to function, and it will still be usable in the short term, a spokesman said.

Sandvine, which is owned by San Francisco-based private equity firm Francisco Partners Management LLC, demonstrated its equipment to a government security team in Belarus in May, and shipped its equipment to the country through a primary contractor, Russia-based Jet Infosystems, according to company documents and two people with knowledge of the matter.

The equipment was installed in Minsk, within data centers operated by the National Traffic Exchange Center, according to the documents and people.

For several days in August, amid protests over the disputed re-election of President Alexander Lukashenko, the center used Sandvine’s equipment to block people from accessing social media websites such as Facebook and Twitter, messaging apps such as WhatsApp and Telegram and international news websites, Bloomberg reported last month.

U.S. Senator Dick Durbin called on the Treasury Department to investigate Sandvine for potential violations of U.S. sanctions on Belarus, saying it would be “deeply troubling if American technology is being used by the last dictator of Europe to block Belarusians from the internet just as thousands peacefully protest a stolen election and brutal political arrests.”

Some Sandvine employees protested the company’s work in Belarus. But in an internal phone conference last week, executives defended the work, saying they hadn’t violated U.S. sanctions and that they didn’t view access to the internet as a human right.

On Tuesday, however, the company said it had determined that Belarus had violated a license agreement that “explicitly prohibits actions that supports or enables the commission of individual human rights violations.”

“Sandvine did not violate any U.S. or other applicable export control laws or sanctions,” the company said. “From a technology standpoint, we are exploring ways to enhance our products to reduce the risk of misuse.”