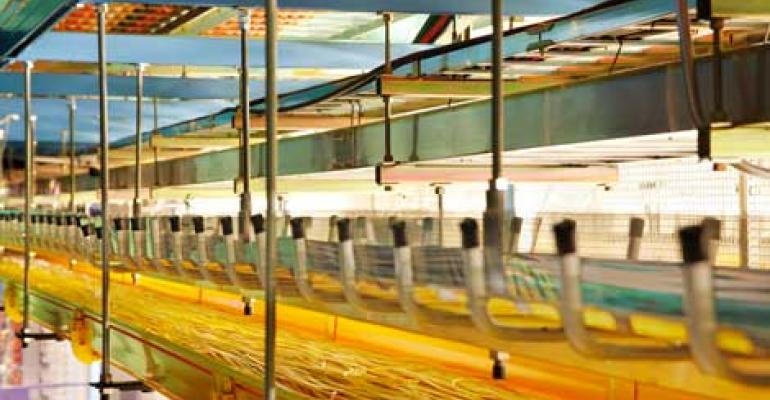 Equinix Positioning for “Next Wave” of Cloud Data Center Deployments

As the data center expansion frenzy by the largest cloud providers in top markets becomes less of a frenzy and more of an incremental growth story, Equinix is positioning itself to capture the next wave of cloud data center growth, which, according to its executives, will be driven by the next generation of applications and opportunities in new markets around the world.

For the world’s largest data center provider that means making some changes to the way it develops business strategy and the way it structures deals with some of its clients.

“We’ve lived with six years or seven years of a wave — we call it kind of the first wave in cloud — and we think there’s another wave coming,” Stephen Smith, Equinix CEO, said on a call with analysts Wednesday. “Obviously, the big hyper-scalers and the cloud providers have learned from their first wave of deployments,” so the next wave “is going to be different.”

To make sure its strategy is in tune with those changes, the company has created a new business group led by one of its top executives. The new Strategy, Services, and Innovation unit consists of the office of the CTO, business development, product management, and product engineering, as well as several new business teams, all charged with “evaluating and translating key market, competitive, and technology trends into actionable business requirements.”

Charles Meyers, who’d been Equinix’s COO for the past four years or so, was appointed last month to lead the SSI unit as President of Strategy, Services, and Innovation.

As cloud providers have learned from the first several years of deploying cloud availability zones, network nodes, and access points, Smith said, they’re changing both the architecture of their cloud infrastructure and the edge of their deployments. “Edge” in this case means all the points where an individual cloud company’s network ends, handing off traffic to another service provider who takes it to the end user.

“We’re watching all that; we’re working very closely with all of them; and yes, we want to position to move quickly as they continue to deploy, and we think it’s still very, very early,” he said.

While there isn’t a comprehensive list of all the changes taking place – the new unit was formed to figure that out – at least some of the drivers are clear.

The Internet of Things requires a more distributed data center topology, where many relatively low-capacity nodes are deployed closer to where many devices generate data. Some companies have already started investing in this edge computing infrastructure – AT&T and NTT Communications are two of the more prominent examples – but that investment is bound to accelerate once the anticipated 5G wireless standard comes out, enabling the kind of data transfer rates required for next-generation applications like self-driving cars and augmented and virtual reality.

How Equinix’s strategy is going to reflect this remains to be seen. The more likely scenario is its site-selection thinking will be heavily influenced by the ability to either host edge computing nodes or quickly aggregate data from as many of them as possible; while its technology investment decisions will be focused on enabling interconnection of networks that carry that data.

“You’ll probably see Equinix taking a more active role in positioning ourselves for extending the interconnection footprint to where these aggregation points matter, and how they evolve … and how the edge moves,” Smith said.

That may mean expanding in secondary data center markets or entering new ones Equinix hasn’t traditionally pursued. The company has already seen demand from cloud providers pick up in places like Sydney, Melbourne, and Osaka after they built out their initial points of entry into Asia-Pacific — the top-tier markets like Singapore, Hong Kong, and Tokyo.

New markets this next wave of cloud deployment may take Equinix into some emerging metros in Southeast Asia, South Korea, India, South Africa, and additional Latin American countries (it already has data centers in Brazil and Colombia).

The next wave may also mean making different types of deals with some of Equinix’s customers. While the company doesn’t do wholesale leases in their traditional form, it has made large-capacity deals with several clients it considers important strategically.

Because it gets higher returns on data center space where many players with smaller footprint interconnect, Equinix has been reluctant to do large single-tenant wholesale deals. While it doesn’t sound like it’s going to start doing those now, the company is going to be more flexible in the way it structures deals with cloud providers who need lots of capacity in particular markets.

What shape those deals will take is unclear at this point; figuring that out is one of the things the new SSI group has been charged with. Equinix is seeing more interest from hyper-scale cloud providers in larger-capacity deals, and it wants to be able to deliver.

“It is something that we are actively looking at within the context of the new SSI organization,” Meyers, the SSI group’s president, said on Wednesday’s call. “It’s to say, hey, are there a very select set of customers and requirements on the sort of hyper-scale side that we view as strategic, that we would like to increase our appetite for? And then, what are the ways that we can do that both from a design and engineering and deployment methodology, as well as how we would finance those transactions?”