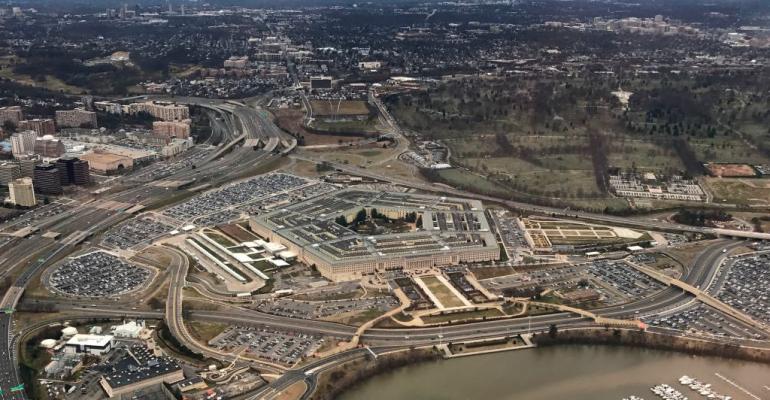 DANIEL SLIM/AFP/Getty Images
The Pentagon, the headquarters of the US Department of Defense, located in Arlington County, across the Potomac River from Washington, DC
Business

Naomi Nix and Tony Capaccio (Bloomberg) -- The Pentagon is preparing for the rollout of its controversial cloud services program even though the requirements of the $10 billion contract are still being challenged in court by Oracle Corp.

Dana Deasy, the Pentagon’s chief information officer, asked department leaders for recommendations about how they plan to use the contract and told them not to initiate any other cloud agreements without his consent, according to a copy of the memo obtained by Bloomberg News.

Deasy sent the memo dated May 20 to a wide range of Pentagon officials outlining guidance for the “fourth estate” -- the Defense Department agencies that provide human resources, services contracting and other support services to the military -- to identify technology programs that could be transitioned to the Joint Enterprise Defense Infrastructure cloud, or JEDI, and to a preexisting cloud program called milCloud 2.0.

The memo sheds insight on how the Defense Department is moving ahead with implementation of the JEDI cloud program even while a legal dispute raises questions about the contract’s terms. Asked whether the Pentagon’s choice for the JEDI award is contingent on a decision in the Oracle lawsuit, Deasy told a group of reporters at a breakfast on Tuesday that “they are two disconnected events.”

He added that the JEDI award will likely be decided “sometime toward the end of August.”

Deasy’s memo also said that departments that have already gained approval to migrate data to other computing storage centers may continue, but must “evaluate JEDI as the General Purpose cloud solution at the end of the period of performance.” The memo also contained a list of more than 50 expected data center closings. The Defense Department has said JEDI should become the department’s general-purpose cloud to store the “majority of systems and applications.

Defense Department spokeswoman Elissa Smith confirmed the authenticity of the memo and added that the Air Force, Army, and Navy have also “begun identifying and prioritizing programs and migrations to JEDI.”

Deasy said Tuesday that over the last six months his team has contacted U.S. regional commanders, such as the U.S. Central Command, for a series of “cloud-awareness sessions.”

“There is a significant amount of pent-up demand just waiting to use the capability once it comes online,” Deasy said. The U.S. Transportation Command that’s in charge of maritime, aviation and land transport has developed a set of tasks they want to migrate to the Jedi Cloud “as soon as that contract is awarded.”

The contract has been contested by Oracle, which the Pentagon eliminated from the bidding in April along with International Business Machines Corp. for not meeting minimum criteria. That move left Amazon.com Inc. and Microsoft Corp. as the last remaining competitors.

Oracle filed a lawsuit in December in the U.S. Court of Federal Claims alleging that the Pentagon crafted overly narrow contract requirements and failed to investigate relationships between former Defense Department employees and Amazon. In May, Oracle filed an amended complaint alleging that Amazon offered two former Pentagon employees jobs while they were working on the contract.

The Government Accountability Office and an internal Pentagon investigation determined the conflict of interest allegations didn’t compromise the integrity of the procurement. Oral arguments in the court case are expected to occur in July.