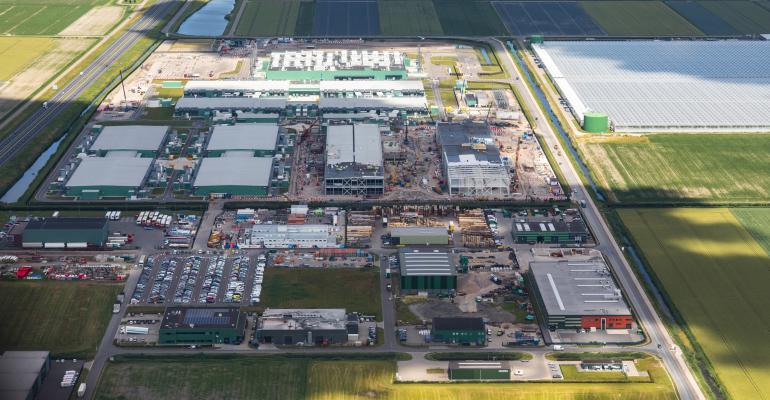 Upstart developer Stratus has been caught in the middle of a powerful money manager’s hostile takeover bid for its backer.

A recently formed European data center developer has been dragged into a row between a powerful East Asian money manager and an Australian investor the money manager is trying to snare in a hostile takeover bid.

Stratus Data Centers debuted in July, announcing a plan to build a network of hyperscale data centers across Europe, India, Africa, and East Asia. It would rent the facilities to hyperscale cloud platforms. Like other speculators that have sprung recently, Stratus intended to take advantage of Europe's boom in cloud computing and the appetite for high-tech – and high-rent – buildings it’s been fuelling. The company said it was already in advanced planning to build in London and Frankfurt when it announced that it had $1 billion in financial backing and more financiers waiting.

But its backer has been attacked for backing it, and its chief executive officer has been subjected to a potentially illegal smear. Meanwhile, the hostile takeover bid has already raised questions about Stratus’s future.

ARA Asset Management, a powerful Asian property investor, slammed Stratus’s backer, Australian money management firm Cromwell Property Group, in statements it filed with the Australian Securities Exchange (ASX) as part of its takeover bid in July. ARA, Cromwell’s largest shareholder, criticized Cromwell’s management for their Stratus deal in an attempt to persuade securities holders to sell it their interest in the firm.

"No Expertise or Competitive Advantage"

“The ARA Group does not intend to support Cromwell’s investment in assets where it has no expertise or competitive advantage, such as European data centres,” said its bid.

ARA was not prepared to tell Data Center Knowledge whether it would unpick Cromwell’s Stratus investment if its acquisition succeeded. Its bid accused Cromwell management of not being qualified to invest in data centers. That means it may force Cromwell to focus on sectors where it has a competitive advantage and divest assets in ones where ARA thinks it doesn’t.

Cromwell declared it had formed a strategic partnership with Stratus one week before ARA made its hostile bid formal on 21 July, and after repeated attempts by ARA to replace Cromwell’s board members and get it to revise its strategy. Cromwell and Stratus would create an investment fund to build data centers across Europe and Asia, the announcement said. Cromwell would find the money to do it, and Stratus would run the operation: planning, designing, constructing, leasing, and managing the data centers.

The planned London and Frankfurt data centers for which Stratus said it had been negotiating with cloud providers would be worth $250 million. Cromwell had already got a Heads of Agreement (a loose promise) for half that money from another property investment fund it managed, the Cromwell European Real Estate Investment Trust (CEREIT). Cromwell, CEREIT, and Stratus would co-invest in the venture. The announcement quoted Nigel Clarkson, Stratus’s CEO, saying its plans had been advanced with Cromwell’s backing.

Within days, however, a columnist for The Australian Financial Review newspaper was trailing details of a spent criminal conviction she had dug up on Clarkson from local newspaper records. She had also found details of a prior business of his that had gone bust. Hong Kong-based real estate industry paper Mingtiandi picked up the story. It quoted an ARA spokesman, who said the asset manager was “appalled” that Cromwell had made its erratic investment in data centers with a firm “whose chief executive officer has been convicted of a criminal offence”.

But Clarkson’s conviction was spent, and some countries, including Australia and the UK, have laws to protect people from discrimination for minor offences that are long past. They are given clean record and powers to seek compensation if they are treated otherwise.

Now the smear was out though, and Clarkson’s business partners started playing down his role in Stratus. Cromwell told Mingtiandi that Clarkson wouldn’t have anything to do with the money being invested in the data center company. It briefed journalists that Clarkson was just CEO to the Stratus venture’s property advisor, and that EXS Capital, Stratus’s parent company, would handle the money.

Cromwell was not prepared to say whether it was trying to distance itself from Clarkson. But the company wouldn’t explain why Clarkson’s role was now merely advisory – when before it had been instrumental.

Eric Solberg, CEO of EXS Capital Group, told Data Center Knowledge that “people with nefarious aims” had attempted to smear Clarkson, and that the matter had been blown out of proportion by irresponsible journalists.

He commended Clarkson, who had been working with EXS since 2015. “He’s done a magnificent job for us. He’s a fabulous talent, a good fellow. He developed data centers for BT as one of their employees and for other private investors, all very successfully.”

But Solberg also said that Clarkson was merely CEO to a property advisor to Stratus Data Centers, called Stratus DC Management. Cromwell’s strategic partnership was not with Clarkson’s Stratus company but with another company, called Stratus DC Partners Limited. Moreover, Solberg said the companies had not actually formed the joint venture Cromwell had announced. They had agreed to proceed with it but were still finalising details.

“Nigel is not the majority owner of Stratus. I am,” Solberg told us. “He’s not the CEO of Stratus overall nor plays any exec role in the owner or the project. He plays a management role for one of the project advisors; he plays an important role as one of the property advisors.

Sodberg insisted that he had not downplayed Clarkson’s role or modified the company structure since the news reports came out. “I’m just trying to make sure the facts are not misrepresented,” he said.

Clarkson did have an equity stake in Stratus, according to Sodberg, but EXS held the majority stake.

The Stratus group company, Stratus DC Partners, and Stratus DC Management are all registered in the Cayman Islands, a British territory the EU blacklisted in February as a non-cooperative offshore tax haven whose financial regime is suspected of harboring tax fraud and evasion and money laundering. The designation is controversial. EXS Capital and ARA, like many other financiers, are also registered in the Cayman Islands.

EXS would manage the Stratus data center fund itself as the orchestrator of the venture, said Solberg. It had gathered money and 20 data center experts and helped them establish a company.

Solberg, who was previously a partner at Citigroup, recruited as advisors Robert Bath, a former VP of engineering at the data center giant Digital Realty Trust, and Jarrett Appleby, formerly an executive at Digital Realty, Equinix, and CoreSite, who also advises investment manager Blackstone and sits on the board of the IT services company Sungard.

Roland Kyle, who as managing director of EXS Capital would be responsible for the fund, had helped run a EU-Asian investment fund whose assets became the core portfolio of Keppel DC REIT, Asia’s first data center real estate trust, according to the firm’s website.

Cromwell has maintained that its partnership with this team contradicted ARA claims that it had no expertise to do business in the data center sector, DCK understands.

Three weeks before ARA launched its bid on 23 June, Cromwell had declared its intention to consider investments in data centers to counter the economic downturn. ARA had also been critical of Cromwell’s interests in retail property in Poland.

Simon Garing, manager of Cromwell European REIT, said in the July announcement that it could build data centers in locations chosen from its 1.4 million-square foot commercial property portfolio. Half its managed assets are in Italy, according to its last published financial results. Around a fifth each of the rest are in Poland, Netherlands, and Finland.

Property advisors Cushman & Wakefield has cited Poland and Italy among the choice markets becoming most important to Europe’s growing data center industry as the internet infrastructure demands greater capacity beyond the primary European cities. This is driven by extraordinary expenditure in Europe by cloud providers, it said in a recent report. Pension, sovereign, and private equity funds were all competing to invest.

The US private equity firm Warburg Pincus bought near half of ARA in May. Warburg would fund ARA’s global expansion, it said, to make it the biggest property fund in Asia. The last three years had seen it grow nearly threefold to hold $88 billion in assets, especially in China, thanks to backing from Chinese AVIC Trust, a Chinese state-owned aerospace and defense conglomerate. AVIC sold up when Warburg bought in. Its other major shareholders are CK Asset Holdings, a famous Hong Kong property investor with a majority of assets in China, and Straits Trading Company, a related investor based in Singapore.