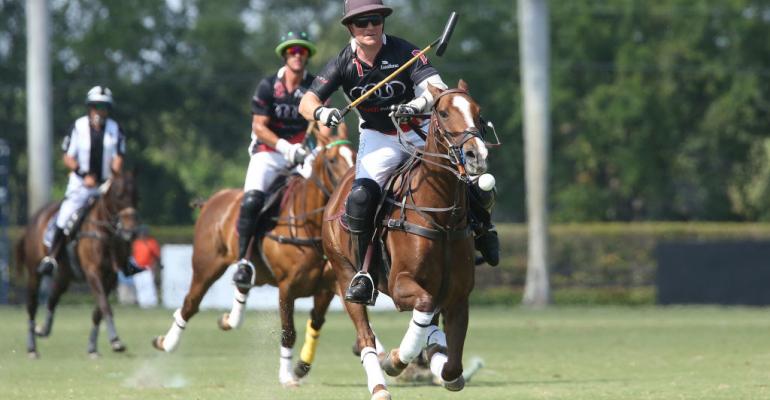 Joel Auerbach/Getty Images
Marc Ganzi, CEO of Digital Bridge who is expected to become CEO of Colony Capital, is a successful polo player. Here he is pictured hitting the ball towards the goal while playing for the Audi team against Colorado during the USPA Gold Cup on March 25, 2018 at the International Polo Club in West Palm Beach, Florida.
Business

The purchase comes as Los Angeles-based Colony Capital seeks to become a key investment manager in the area of technology-linked real estate. Ganzi, who founded Digital Bridge with Ben Jenkins in 2013, will become CEO of Colony Capital in about 18 to 24 months, and Barrack will return to the role of executive chairman, the companies said Thursday in a statement, which followed an earlier report by Bloomberg.

Related: Why Digital Bridge Isn’t Building Edge Data Centers at Its Towers (Yet)

Ganzi “is an exceptional choice” to lead the company “as we accelerate, streamline and cull other Colony business lines through sale or joint ventures and continue to reduce corporate costs,” Barrack said in the statement.

Colony will expand its digital, credit and investment management platforms while realigning and redirecting its hospitality and health-care businesses, Barrack said. The company is exploring the sale of Colony Industrial, its unit that owns warehouses, with a deal potentially fetching more than $5 billion, people with knowledge of the matter said last week.

The company’s shares rose 3.8%, their biggest gain in almost six months, on Thursday.

Colony Capital and Digital Bridge were already partners in Digital Colony Management LLC, a communications infrastructure-focused firm that last month announced the closing of an inaugural investment fund that has $4.05 billion in commitments.

Ganzi, a longtime digital-infrastructure executive, founded Global Tower Partners in 2003, and the company was acquired by American Tower Corp. a decade later for about $4.8 billion.

Colony Capital, which manages $43 billion with a focus on real estate, has been struggling to bounce back from a calamitous January 2017 merger with two NorthStar companies. Since the deal’s completion, its stock had fallen about 67% through Wednesday. Barrack, who was chairman of Trump’s inauguration committee, returned to the CEO role at Colony Capital last November.

Assets under management at Colony Capital will rise to about $60 billion with the Digital Bridge acquisition.