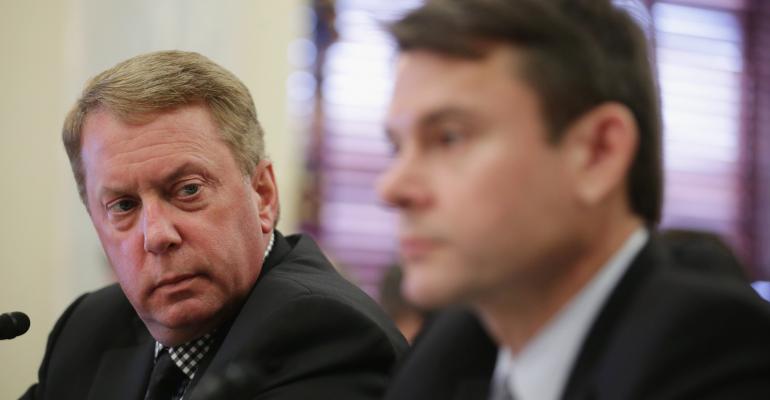 CME, Linchpin of Chicago Finance, Says It's Not Tied to the City

CEO Duffy notes exchange is based there for ‘legacy reasons’, but the Chicago native sees many great reasons to stay

Chief Executive Officer Terry Duffy said that the exchange is less rooted in its historical home of Chicago because it now barely relies on face-to-face dealing in trading pits. CME has no plans to leave the city, he said in an interview Tuesday.

Just last year, politicians went searching for new revenue to fix a budget crisis, with some floating the idea of taxing trades on CME’s exchange. It wasn’t adopted.

“Our legislature is in search of money, and they’re looking for bright shiny objects in the room,” Duffy told Bloomberg editor-in-chief John Micklethwait in the interview at CME’s headquarters. “We happen to be one because we’re a global company.”

Enough lawmakers in Illinois -- which has the lowest credit rating of any U.S. state -- get that taxing CME isn’t the solution, he said. And those who don’t should remember the company isn’t tied down: It’s pared back real estate holdings in the area and the shift to electronic trading means CME could move anywhere. The exchange, more than ever, is a virtual operation currently based in a data center in Aurora, Illinois, just outside Chicago.

“I think there’s enough people that understand the benefits of CME Group being headquartered here in Chicago,” Duffy said.

CME emerged from a collection of exchanges, like the Chicago Butter and Egg Board, dating back to the 19th century when the city was the Midwest’s agricultural and transportation hub. But CME has moved on, with much of its business stemming from financial products like futures on interest rates, currencies and the S&P 500.

Chicago, he said, has a lot going for it, such as a diverse economy and plenty of talent coming into the city. He called the area’s universities -- which includes the University of Chicago, home of this year’s Nobel Prize for Economics winner Richard H. Thaler -- “second to none.”

Duffy also downplayed the level of violence even as the murder rate has risen. “Chicago’s become much more livable,” said Duffy, a 59-year-old native of the city’s south side. “Contrary to the press that’s portrayed it as a war zone, it’s not a war zone.”

In January, President Donald Trump tweeted that if the city “doesn’t fix the horrible ‘carnage’ going on” that he will “send in the Feds!"

Earlier this year, Duffy told analysts that when he makes acquisitions, he prefers big ones. Deals in 2007 and 2008 helped make the company what it is today, including the addition of interest-rate contracts that are among the reasons CME is now seeing record trading volume.

“It’s very difficult to get some of these transactions done today especially cross-border, and that’s really the ones left out there,” he said.

Duffy said he would consider buying a U.S. company if he can find a business case for it. At the moment, he said he doesn’t see one.

“But I’m not ruling out M&A activity,” he said.