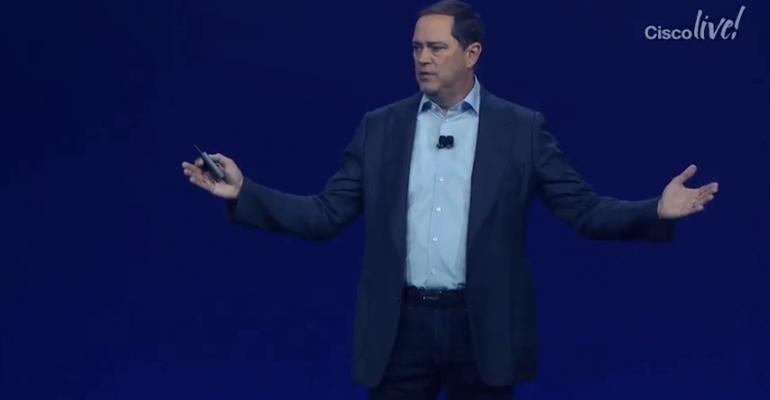 In his statements to government officials in DC, Chuck Robbins said he was representing the view of several big US tech companies.

U.S. companies will end up absorbing the costs of higher tariffs, spending less on the research and development that can lead to technological breakthroughs, Robbins said during a meeting with government officials in D.C. earlier this month. He told Bloomberg News that he was representing the view of several big U.S. technology companies in addition to his own: Hewlett Packard Enterprise Co., Dell Technologies Inc. and Juniper Networks Inc.

"If we go to the next wave in tariffs, tech companies in the U.S. will have to absorb that and cut back in R&D when what they want us to do is lead in innovation,” Robbins said in an interview at Bloomberg’s New York office Wednesday.

Cisco, like many U.S. hardware companies, uses contract manufacturers in Asia -- mainly China - to make its products. That makes it susceptible to U.S. tariffs when bringing those goods into its home market, increasing costs.

Robbins said Cisco has been able to absorb tariffs at current levels by making its supply chain as efficient as possible and passing some costs onto customers. But unless trade talks with China produce a deal by March 1, the White House is set to increase tariffs to 25 percent from 10 percent on $200 billion of Chinese goods. That would potentially put funds for research and development in jeopardy, Robbins said.

Cisco allocated more than $4 billion in 2017 to R&D in the U.S. for networking products, according to a joint filing by Cisco, Hewlett Packard Enterprise, Dell and Juniper last September. The companies asked U.S. Trade Representative Robert Lighthizer to spare their products from additional tariffs. Juniper put almost 20 percent of its global revenue toward research and development, while Hewlett Packard Enterprise invested $1.5 billion, the firms wrote.

In addition to having less to invest back into their businesses under higher tariffs, companies are also less likely to collaborate with others on research, according to Bloomberg Economics Chief Economist Tom Orlik. Even if firms do have money available to spend, they may hold off on research and development due to the heightened uncertainty, he added.

"The flip side of that, of course, and the argument which the U.S. government makes is that it’s China’s intellectual property theft which is the real disincentive to R&D investment," Orlik said.