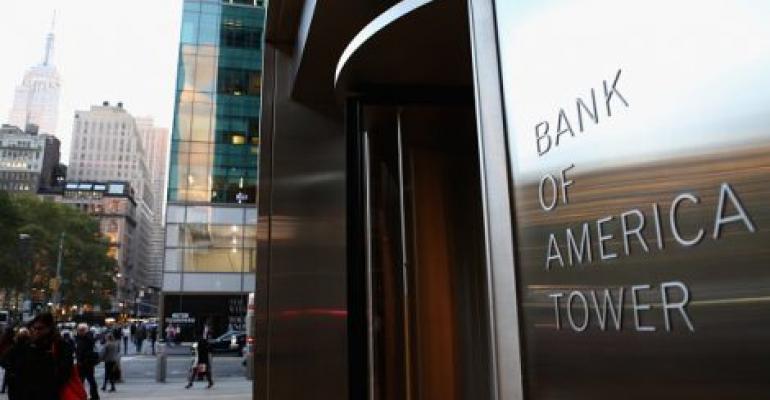 The lender has applied for or received at least 43 patents for the ledger technology used for verifying and recording transactions that’s at the heart of virtual currencies. It is the largest number among major banks and technology companies, according to a study by EnvisionIP.

Susan Decker and Jenny Surane (Bloomberg) -- Bank of America Corp. may not be willing to help customers invest in Bitcoin, but that doesn’t mean it isn’t plowing into the technology underlying the cryptocurrency.

The Charlotte, North Carolina-based lender has applied for or received at least 43 patents for blockchain, the ledger technology used for verifying and recording transactions that’s at the heart of virtual currencies. It is the largest number among major banks and technology companies, according to a study by EnvisionIP, a New York-based law firm that specializes in analyses of intellectual property.

Related: What Blockchain Means (Hint: Not Just Bitcoin), and Why You Should Care

“Based on what’s publicly out there, the technology sector hasn’t embraced blockchain as much as the financial-services industry,” Maulin Shah, managing attorney for EnvisionIP, said in an interview.

International Business Machines Corp., which has targeted blockchain and artificial intelligence for future growth, tied with Mastercard Inc. for second on the list, with 27 each.

Bank of America has refrained from offering Bitcoin futures contracts and its Merrill Lynch unit told employees not to offer brokerage clients access to one of the few financial instruments directly holding Bitcoin. Mark Pipitone, a BofA spokesman, said in an email that the bank has 48 blockchain-related patents and applications, declining to comment further. EnvisionIP’s study only included issued patents and applications that are made public, which typically occurs 18 months after they’re filed.

Historically less active in pursuing patents, banks in the past two years have become more aggressive, working with the U.S. Patent and Trademark Office to educate examiners about financial services. One goal was to limit patents that could be used against them; the other was to ensure they’d be able to get the patents they want.

Blockchain technology could reshape the global financial system as banks look to use it to speed trading, improve record-keeping and simplify back-end functions. Mastercard, the world’s second-largest payments network behind Visa Inc., is testing the technology to facilitate payments between businesses, Chief Executive Officer Ajay Banga said on a conference call with analysts in October.

“The challenges of speed, of transparency and costs -- both in domestic and cross-border payments in B2B -- are more interesting than trying to find technology looking for a problem to solve in consumer payments,” Banga said on the October call.

Blockchain is geared toward “manipulation of data, and that’s why it’s really taken off in the payment-processing industry,” Shah said. “This is only going to increase.”

Software companies that deal with large amounts of data, like Alphabet Inc.’s Google, Microsoft Corp. and Oracle Inc., haven’t received many patents related to blockchain. That may change as recent applications are made public.