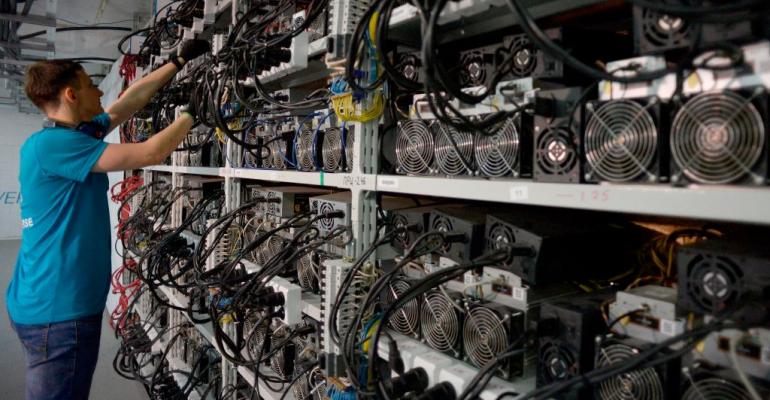 Now’s a great time to get into Bitcoin mining. That is, if you can find a place to plug in.

Brandon Kochkodin (Bloomberg) -- Now’s a great time to get into Bitcoin mining. That is, if you can find a place to plug in.

A crackdown in China has taken out a vast number of machines in the global network used to perform the calculations that verify transactions and create new Bitcoins. Now profitability for miners has surged as the amount of energy needed to solve for a Bitcoin block plummets.

Related: Bitcoin’s Green Haven Is Running Out of Surplus Electricity

That’s great if your equipment is already up and running. But the hunt for space in Bitcoin-friendly data centers has become so frenzied that bounties are being offered for referrals leading to new homes for stranded miners.

Christian Kaczmarczyk, a principal at venture capital firm Third Prime, said some Chinese miners are willing to pay substantial premiums above the ideal operating rate of less than five cents per kilowatt-hour.

“People are paying an arm and a leg to find hosting right now,” Kaczmarczyk said. “These miners from China are willing to pay 6, 7, 8, 9 cents to get in the game. They’ll pay whatever.”

The creation of new hosting facilities has long failed to keep pace with mining companies that are feverishly adding equipment to their arsenals. But what had been a persistent mild ache is becoming an excruciating pain. Getting the needed materials such as electrical transformers and switches has been complicated by disruptions in the global supply chain. Strict regulations for tapping into power grids means build times that can drag on for years.

The flood of displaced miners looking to relocate to the U.S. after China’s crackdown is exacerbating the crunch.

“Machines are no longer the bottleneck,” said Meltem Demirors, chief strategy officer at CoinShares. “Hosting facilities are. You just can’t build a massive co-location data center in a few months.”

Chinese miners are in a mad dash because of what their being off line has wrought: Profits are surging.

The difficulty level of solving a Bitcoin block is adjusted about every two weeks to keep the average processing time at 10 minutes. Based on the amount of computing power flowing through the network, which has dropped following China’s crackdown, the latest adjustment brought the difficulty down to a level last seen when the digital currency traded around $9,000 in June 2020.

That means for the same amount of work put in at this time last year, the miner who wins a block reward will collect coins worth more than three times what they were valued at back then.

“The people with machines online now are in for a treat,” said Zack Voell, director of research and content at Compass Mining. “Chinese miners are not only scrambling to get back online, but they’re now missing out on this huge economic incentive to mine.”

And that huge incentive will only further aggravate the crunch for space. Older computers like the Antminer S9 ASIC that were nearing obsolescence as solving Bitcoin’s puzzle got harder and harder are now gaining a second life, according to Jason Les, the chief executive officer of mining company Riot Blockchain Inc.

“Market conditions are such that the older generation of mining hardware is still profitable,” Les said. “You’d normally expect those older models to come off line, but if you have low enough energy costs the S9 is profitable today.”

Chinese miners may eventually face the tough decision of waiting for the government to have a change of heart, or sell their machines at a time when the market is already inundated.

“There’s limited hosting space and it’s such a concern that about 30% of the Chinese miners are just throwing up their hands and capitulating,” said Mason Jappa, the chief executive officer of crypto mining hardware broker Blockware Solutions. “They’re selling rigs for 2020 prices.”

For those willing to navigate the complexities of getting machines out of China, the crackdown and lack of hosting capacity could create an ideal backdrop for distressed deal making.

“Ultimately a lot of this short-term mania will provide some very strategic opportunities for more efficient miners down the road,” said Third Prime’s Kaczmarczyk. “You’ll see some strategic buyouts and private equity like deals.”

How long the data center crunch will last is unclear at this point, but Compass Mining’s Voell thinks it could be six months or more before new facilities can be brought online to absorb the excess capacity.

“The shortage that existed before just got blown out of the water,” said Voell. “There’s absolutely no way all these ASICs will find space and be back online before the end of this year. The problem just got five-times worse.”