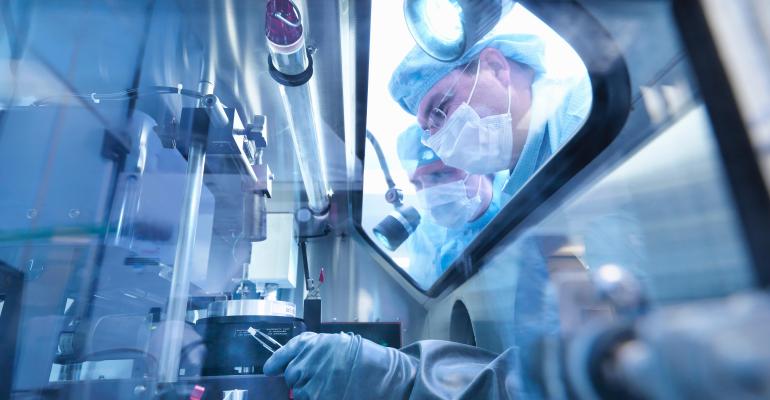 (Bloomberg) -- President Joe Biden signed into law a broad competition bill Tuesday that includes about $52 billion to boost domestic semiconductor research and development, calling it a “once-in-a-generation investment in America itself.”

“We need to make these chips here in America to bring down everyday costs and create jobs,” said Biden at a signing ceremony for the CHIPS and Science Act on the White House South Lawn, joined by executives from US semiconductor firms and congressional leaders.

Biden said he had visited the US facility where Javelin missiles were made and said the bill would make the nation less reliant on other countries to provide the advanced chips needed for those weapons systems, as well as other products.

“Unfortunately, we produce zero percent of these advanced chips and China is trying to move way ahead of us to manufacture these sophisticated chips as well,” said Biden.

“It’s no wonder the Chinese Communist Party actively lobbied US business against this bill. The United States must lead the world in the production of these advanced chips; this law will do exactly that.”

Spurred by the bill, US semiconductor companies are planning billions of dollars in new investments. Ahead of the signing, the White House announced that Micron Technology Inc. will invest $40 billion in memory-chip manufacturing and that Qualcomm Inc. is partnering with GlobalFoundries, which has a facility in New York state, in a $4.2 billion agreement to manufacture chips. Micron on Tuesday said its investments would create up to 40,000 jobs in sectors including construction and manufacturing -- well beyond the initial White House estimate of 8,000 -- and it expects to receive funding through the semiconductor bill.

The chips bill is one in a slew of legislative wins for the White House in recent weeks. Senate Democrats on Sunday passed a sweeping climate and spending bill -- a slimmed down version of Biden’s Build Back Better agenda -- after lawmakers also approved veterans health and gun-safety bills with bipartisan support.

The legislation first passed the Senate in June 2021 but lingered in the House for months, and it took more than one year to reconcile the two chambers’ versions. Some Senate Democrats had criticized the White House for not pushing the House and Pelosi to get the legislation over the finish line sooner.

The chips bill is at the center of the Biden administration’s effort to reduce dependence on Asian suppliers like Taiwan and South Korea, whose homegrown companies are leading the market, and to address supply-chain disruptions and resulting price hikes for certain goods containing semiconductors.

A large chunk of the federal grant is expected to go to Intel, Taiwan Semiconductor Manufacturing Co. and South Korea’s Samsung Electronics Co., all of which are now building new chip fabrication facilities worth tens of billions of dollars in the US.

US to Stop TSMC, Intel From Adding Advanced Chip Fabs in China

It was a condition made by lawmakers and the White House and was included in the measure over the objection of some chipmakers. Intel, in particular, was lobbying hard against the prohibitions. In late 2021, the American chipmaker wanted to increase production in China, but the plan was rejected by the Biden administration.

Micron’s Mehrotra said earlier Tuesday that “today less than one in 50 chips, memory chips in the world, are produced in the US. With Micron’s commitment, it will enable us to produce one in 10 chips of the global memory consumption here in the US.”