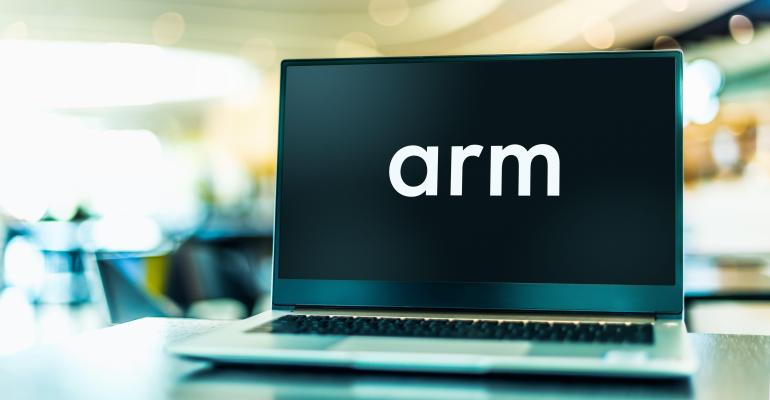 Arm is ubiquitous in mobile and popular for laptops. Customization and price advantages mean it deserves a second look in the data center, as well.

Arm -- which stands for Advanced RISC Machines -- differs from AMD and Intel in that it is more of a philosophy than a specific product. Arm architectures are used by chip manufacturers to create custom hardware for particular applications.

In the past, this was mostly for smartphones and other IoT devices. But several companies are also creating Arm-powered chips for the server market.

Arm has been actively promoting this, with the latest Arm Neoverse V1 and Arm Neoverse N2 chips designed to help their chip manufacturing partners go up against Intel's third-generation Xeon chips.

And hyperscale cloud providers are using Arm to build their own custom chips.

In April, Microsoft announced a preview of Ampere Alta Arm-based processors as an option on its Azure Virtual Machines, claiming up to 50% better price performance.

Ampere's Arm-based chips are also used by Oracle and Equinix.

According to Jacob Smith, VP of bare metal marketing and strategy at Equinix, Arm accounts for about 10% of customer deployment at Equinix.

"I think that 'it's good for IoT' is an outdated story line," he told Data Center Knowledge. "It makes sense -- there are about a trillion devices out there that run on Arm-based chips. But the real story to me behind Arm is that it's very much a customizable ecosystem."

Smith was exaggerating about the number of Arm devices, but not by much. Last year, Arm hit the 200 billion mark.

"Arm makes designs for chips and people can take parts of that and make whatever they need," Smith said.

For example, a customer running a virtual machine on the Amazon cloud might opt to use Graviton because it's cheaper, he said. "Or you might not even know, because you're consuming a service that Amazon is running and they've decided to use Arm under the hood."

The main beneficiaries are cloud providers who can deploy it at scale, he said, or enterprises like Apple or Tesla who use custom-built chips in their products or operations.

At Equinix, customers can choose between current generation Intel, AMD or Arm chips as options for their Equinix Metal services. "We're the plumbers," he said. "We put everything in the right place so everyone can connect to each other, but believe in being agnostic as to what the technology is."

A common use case for Arm chips is to access networks with low latency.

Modern technologies can work particularly well on Arm, he said.

"Golang doesn't care what you run it on," he said. "It's super happy on an x86 or on Arm. So if you have a cloud workload, you can take advantage of that."

Arm is useful at data centers for off-loading overhead functions, said Bharat Kapoor, head of the Product Excellence and Renewal Lab at Kearney, a global strategy and management consultancy. It's also useful for simpler customer workloads.

"Xeon is like your six-liter HEMI while Arm is like your Briggs and Stratton lawn mower engine," he told Data Center Knowledge.

Arm-based chips have three advantages in data center applications, according to Dion Hinchcliffe, VP and principal analyst at Constellation Research.

First, of course, is the price.

"They can be more scalable and cost-effective while handling today's more dynamic workloads," he told Data Center Knowledge.

Then there's the customization. Hyperscalers in particular can create a more adaptable cloud ecosystem, he said.

"Third, due to roots in mobile devices, the ARM physical footprint is relatively small," he added. "Which meets the needs of today’s new micro data centers that are located closer to the edge."

Some additional software work is necessary to make Arm work, however, which is why hyperscalers are taking advantage of these chips first, particularly for platform-as-a-service workloads.

"They have the staff and resources to recode their platforms," he said.

But this is likely to change, he added.

"Pretty soon automatic workload translation will open up Arm for the more traditional datacenter and on-premise market," he said.

This month's Qualcomm announcement can help Arm get even more of a foothold in the server market, he added.

Qualcomm is reportedly seeking customers for an Arm-based server chip. The company unsuccessfully tried to break into the server market four years ago, but this time may be different. Last year, Qualcomm spent $1.4 billion to buy Nuvia, a company that specializes in Arm-based data center chips.

It will also give data centers more diversity in processor sourcing, which is important in a world with chip supply constraints.

"It's good for cloud providers to be in a good commercial situation where they can negotiate with multiple vendors," said Holger Mueller, Hinchcliffe's fellow analyst at Constellation Research.

Arm Chips in Action in the Data Center

"The demand that we see for services inside our data centers has not typically matched the Arm workload concept," he told Data Center Knowledge. "We think of it as a low-power, battery-powered, small-form-factor kind of workload. We're not seeing a huge adoption in the server market at this exact second."

Where Arm-based chips do show up in his infrastructure is in smart cameras, temperature sensors, and biometric security scanners.

"We're using them in our cameras because we do some AI on those cameras," he said. "We do package recognition, facial recognition to see who's in a space. We can give you time series data, this is when we saw this person, we saw this person open this cabinet. That's where the Arm processor helps us."

The technology is used to help QTS' internal security and operations, and also to provide real-time, on-demand visibility to its data center customers.

But for data center customers, they're typically running larger workloads in environments where power and space constraints aren't as dramatic as in IoT devices.

Bensten's experience is representative of most data centers, both third-party providers and on-prem enterprise facilities.