The data center provider's proprietary cooling solution and contracting options continue to gain traction, but the end-game could be serving emerging markets overseas.

Few would disagree with the observation that CTOs and CIOs tend to be conservative by nature, or that engineers tend to be highly skeptical when it comes to adopting new or unproven technology. Perhaps even more so when claims are made regarding efficacy of innovative solutions compared with "tried and true designs."

Explaining the advantages of a novel approach to data center cooling and winning over any cynics will certainly be part of the job description for Andrew Schaap, Aligned Energy's recently hired CEO. Schaap joined the Aligned team after an 11-year career with Digital Realty, including his most recent tenure as senior Vice President of Global Solutions. Schaap told Data Center Knowledge in an interview that he was "attracted to Aligned Energy's culture of innovation and customer-centric approach."

Aligned has attracted a notable group of senior-level data center executives with extensive data center experience. In April, Anubhav Raj joined Aligned Energy as CFO, coming over from TIER REIT. Raj worked at CyrusOne as VP and treasurer during the 2013 IPO and helped the data center provider raise over $3.5 billion in capital markets during his tenure.

Aligned Energy is a holding company backed by the hedge fund BlueMountain Capital Management. There are four companies under the Aligned Energy umbrella:

Inertech's patented cooling technology is touted by Aligned Energy as delivering a total cost of ownership advantage for customers due to lower monthly energy bills and reduced water consumption. Racks are placed on a solid floor in a traditional aisle layout, as shown below. Notably, there is flexibility to deploy varying density within aisles, up to 50kW per rack. 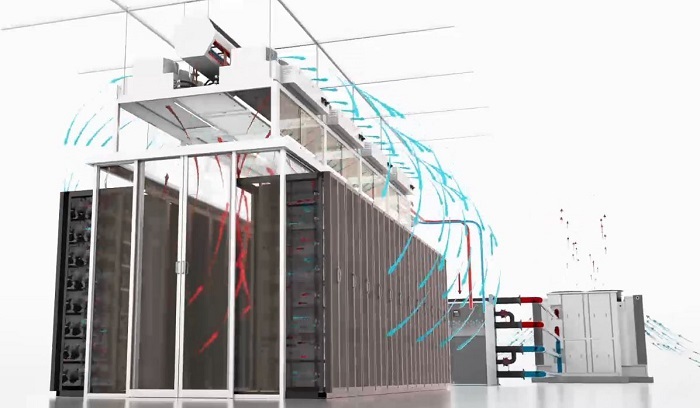 According to company literature, this design offers "up to 80% energy savings, up to 40% less electrical infrastructure, and up to 85% less water than traditional systems."

Members of the commercial brokerage community told Data Center Knowledge in an e-mail that the willingness for Aligned to enter lease contracts based upon a guaranteed 1.15 PUE in climates like Dallas and Phoenix "is an absolute differentiator in the TCO model for customers." The Aligned Energy value proposition appears to be gaining traction in the marketplace.

Aligned Energy's modular cooling solution can ramp up equipment in a just-in-time fashion, allowing customers to contract and pay a variable rate based upon actual power utilization.

Aligned offers "utilization curve pricing" which is a good fit for tenants planning to ramp up capacity over time. An example illustrated below would be a contract allocation of 1MW, where the customer initially utilizes 500kW and either ramps up over time or releases the unused capacity. This approach could be particularly attractive to "land and expand" colocation customers looking to match expenses with projected revenue growth. 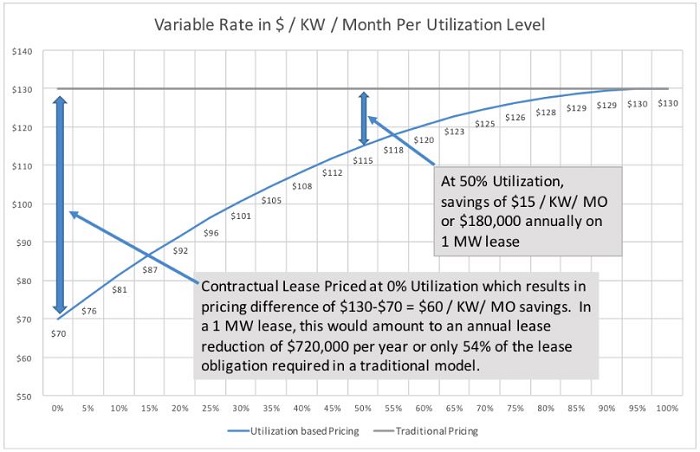 The system monitoring capability allows for power billing flexibility for tenants as small as 300kW -- the smallest increment leased directly from Aligned Data Centers. (Additionally, smaller cages and rack space could be sub-leased from managed services providers who lease from Aligned).

However, it can be difficult to change how large organizations procure colocation space, even when it could result in a more favorable arrangement for the tenant over time. At the end of the day many large enterprise companies will still prefer the certainty of a fixed contract. Essentially, this would entail the customer working with Aligned to select a point along the pricing curve which is then billed as a fixed monthly payment.

When it comes to attracting super-wholesale deals on long-term contracts, perceived stability of the financial counterparty and operational track record as a landlord are certainly going to be customer considerations. These are areas where publicly traded data center REITs can have an advantage, along with their access to debt and equity capital markets at relatively attractive rates.

However, Carnemark pointed out that a nimble privately held company has some advantages of its own, "including the ability to match a custom capital solution for each hyperscale deal." These types of deals can be attractive to pension funds and insurance companies as joint venture partners or purchasers, either before or after development.

It remains to be seen if Aligned Data Centers will be able to take significant market share away from some of the larger players in the industry. One metric that is not entirely clear is the cost per megawatt of the proprietary Inertech cooling solution versus a more traditional approach to wholesale or super-wholesale data center design.

Aligned did not reveal the size of the recently signed hotel and airline reservation customer DHISCO Inc. this past May in Dallas. Management explained that leasing velocity has been ramping up, but NDA agreements prohibit public discussion of other tenant signings.

Carnemark had mentioned in previous interviews that Inertech designs work particularly well at scale, which was one reason given for the 550,000-square foot design for the Aligned Data Center campus in Phoenix. Obviously, Aligned is expecting to sign some large customers in Phoenix, a facility that could ultimately grow to 120MW over time.

The "killer app" for Aligned Energy going forward could be in adapting Inertech's modular data center approach for use in third-world countries. Schaap has considerable experience in selling data center solutions in overseas markets which appears to have played a role in his being selected as CEO.

Carnemark told DCK, now with Schaap on board, he can devote more time to modular designs "intended for hot, humid climates where the power grids are not stabilized." Aligned Energy's ability to serve emerging markets like India could become an interesting "blue ocean" strategy. In such a scenario, Inertech's valuable patents could easily become the better mousetrap.