DuPont and CyrusOne's mega-deal success may have forced Digital's hand, which may explain the price premium, but that's only part of the story.

Over time, Digital Realty Trust's inability to sign and deliver purpose-build data centers for hyper-scale cloud service providers in major US markets could become an existential risk. To mitigate, the company signed the largest US hyper-scale deal of the year, a $7.6 billion merger with wholesale rival DuPont Fabros Technology (DFT). The situation's existential nature is one way to explain the premium Digital (DLR) has agreed to pay.

If there were any lingering questions regarding a "new normal" for wholesale data center leasing, Digital Realty's CEO Bill Stein put them to rest last Friday. Super-wholesale is now officially an asset class of its own.

If things evolve according to plan, sometime during the second half of 2017 DuPont Fabros will become part of Digital's hyper-scale development arm. Notably, the land holdings of both REITs are complimentary, with the exception of Silicon Valley, where neither have sites remaining for expansion.

In 2015, Digital Realty made a bold move to offer connectivity-focused retail colocation solutions with a $1.86 billion acquisition of former customer Telx. I have referred to this pivot toward connectivity as "Digital 2.0." The interconnection business offers steady revenue streams which help to mitigate the lumpiness of larger-scale wholesale deals.

During the past two years, US Tier 1 markets have seen an unprecedented acceleration in wholesale leases signed by the largest public cloud service providers and social networks. The size of these deals and the length of the lease terms have both become "super-sized." The willingness of firms like Microsoft, Oracle, IBM/Softlayer, Google, and Amazon to sign leases for massive data halls in existing powered shells and pre-leases for build-to-suits has been hitherto unseen.

Digital has had continued success signing bread-and-butter 1MW-4MW enterprise deals, but landing 10MW-plus customers in US markets has proven to be difficult over the past 18 months. Notably, a company the size of Digital cannot continue to deliver numbers Wall Street expects each quarter without landing some super-wholesale deployments in the largest US markets – including Northern Virginia's "data center alley." 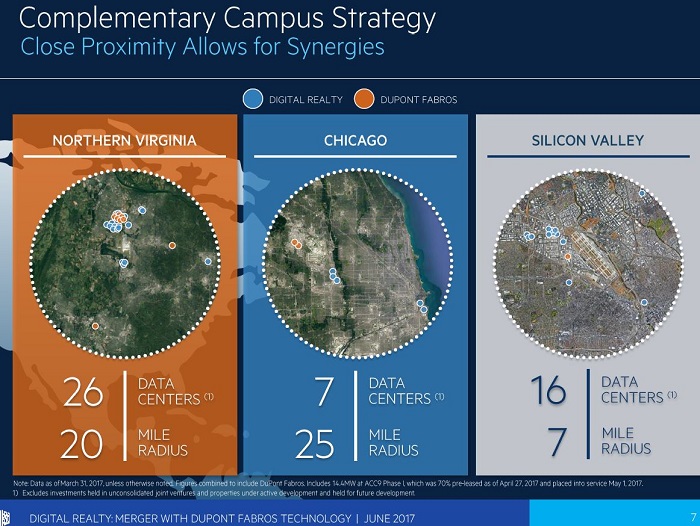 One notable synergy is Digital has ample land in Ashburn, a market where DuPont Fabros's record leasing success has gobbled up most of its land inventory. Additionally, DuPont Fabros does not develop in Dallas, an active Tier 1 data center market where Digital has a large presence and owns considerable land. Data Center Knowledge coverage on Friday highlighted additional rationale behind the deal:

The deal premium for DFT shareholders was calculated using a $118.02 price for DLR shares and a fixed 0.545 exchange rate for DuPont Fabros common shares, or $64.32 per share. However, over a third of the 15.8 percent premium being paid to DuPont Fabros shareholders evaporated on Friday, due to Digital share price falling to $113.32 on news of the deal.

According to Digital management on Friday's conference call, "The transaction is expected to be roughly 2 percent accretive to core FFO per share in 2018, and roughly 4 percent accretive to 2018 AFFO per share."  Basically, ~1 percent AFFO from $18 million in expense synergies, ~2 percent estimated from replacing DuPont high-yield debt with Digital investment-grade debt, and one percent from the higher DLR share multiple.

A 100 percent stock deal that floats with DLR share valuation seems to be an advantage for Digital at the expense of DuPont Fabros shareholders. There was no cash component to lock-in part of the negotiated premium. However, that does seem to leave a tiny bit of room for a more attractive offer.

According to SEC filings, if DuPont Fabros gets a better unsolicited offer under certain conditions, there could be a $150 million break-up fee due to Digital Realty. In a similar fashion, if Digital fails to close, DuPont Fabros could be entitled to a $300 million payment.

However, large multi-national corporations are rarely nimble enough to pull off a deal like this on short notice. This merger was unanimously approved by both Digital and DuPont Fabros boards and is expected to close later this year after shareholder approvals. A bidding war with Digital Realty doesn't seem likely.

This deal began to take form 90 days ago and accelerated during the past 30 days or so, according to Digital's chief investment officer Scott Peterson. Notably, DuPont Fabros execs did not participate in the Friday morning call.

DuPont Fabros seems to be cashing out at the top of its game. Digital CEO Bill Stein in response to an analyst said: "Our active development pipeline as of the end of the first quarter is about 60-plus megawatts, roughly 45 percent pre-leased.  And their most recently updated active development pipeline, just call it 79 megawatts, about 48 percent pre-leased.  So, fairly close." The way I keep score, DuPont Fabros with its much smaller market cap has been hitting it out of the park.

Arguably, these can be viewed as happy problems. However, Digital Realty's global footprint helps to balance out what would have been an increasingly large exposure in Northern Virginia for DuPont Fabros. Digital's investment grade balance sheet makes it easier to fund DuPont's development pipeline, while delivering higher EBITDA margins.

Digital shared a ranking of the Top 20 customers post-merger, on the slide below. It is certainly impressive, with customers 2, 8, and 9 believed to be Microsoft, Apple and Salesforce, respectively.

During the Q&A, John Petersen of Jefferies lobbed this grenade:

"Now, I know at DFT in the past, a lot of the leases were signed kind of by the executives.  So I'm kind of curious what your thoughts are on maintaining relationships with companies like Facebook and Microsoft, and ensuring that they stay part of the portfolio under a combined company.

Bill Stein:  No, I mean, we obviously have a fair amount of business with both those companies and we have relationships throughout the organizations, their organizations and our organizations at multiple levels. So I would expect that that would absolutely continue.  In fact, some of those conversations have already occurred about this deal, and the reception has been quite positive."

Petersen was no doubt referring to DuPont Fabros founder and former CEO Hossein Fateh, currently CEO of Cloud HQ, a wholesale competitor in Northern Virginia, who reportedly has signed Microsoft as a 35MW customer.

One risk factor for Digital Realty would be the ability to retain key talent after the merger. A relatively small amount of money and stock incentives can go a long way toward solving that problem.

However, the largest unanswered question might be the ability for Digital to sign new hyperscale deals with DuPont's largest cloud customers going forward. Will the goodwill and "excellent customer relations" noted by Stein in his Friday letter addressed to the DFT team continue after this merger is completed?

After the proposed merger is consummated there will no longer be a 100 percent pure-play wholesale data center REIT play for investors. Nature abhors a vacuum. So, it remains to be seen if an IPO will materialize to create another such option.

The closest remaining publicly traded wholesale option for investors would be CyrusOne (CONE). The success of CyrusOne "punching above its weight class" combined with DuPont Fabros's hyper-scale leasing success appear to have forced Digital Realty's hand.

Digital has certainly reinforced its position as the only data center landlord offering a full range of space, power' and connectivity solutions within a global footprint. During his recent REITWeek 2017 presentation, Stein mentioned that non-US scale offerings represented "Bluer Oceans" with less competition.

Also during REITWeek, CyrusOne CEO Gary Wojtaszek reiterated his goal of being in Western Europe "by this time next year." Stay tuned.