The blockbuster acquisition expands the REIT’s capacity in top markets and serves as a preemptive strike in a tough battle for hyper-scale clients.

Digital Realty, a San Francisco-based real estate investment trust and one of the world’s largest data center landlords, announced the blockbuster all-stock deal Friday, saying it had agreed to acquire DuPont Fabros for about $7.6 billion, including $1.6 billion in assumed debt.

“A real game-changer,” is how Andrew Power, Digital Realty’s CFO, characterized the deal in an interview with Data Center Knowledge. “We are getting very high-quality assets in the top US markets,” he said. “It also deepens our relationship with some of these blue-chip customers: Microsoft, Apple, Salesforce, and others.”

The deal significantly increases Digital’s footprint in the top-tier Northern Virginia, Chicago, and Silicon Valley data center markets. DFT has 12 data centers, with a total of 300MW of power. It also gives Digital substantial footprint in secondary markets where it has not been a major player: Toronto and Hillsboro, Oregon (about 20 miles west of Portland).

Once the acquisition is closed, Digital Realty will become the largest multi-tenant data center provider in North America with 18 percent market share, knocking Equinix down from number-one to number-two with 16 percent market share, according to the market-research firm IHS Markit (click chart to enlarge): 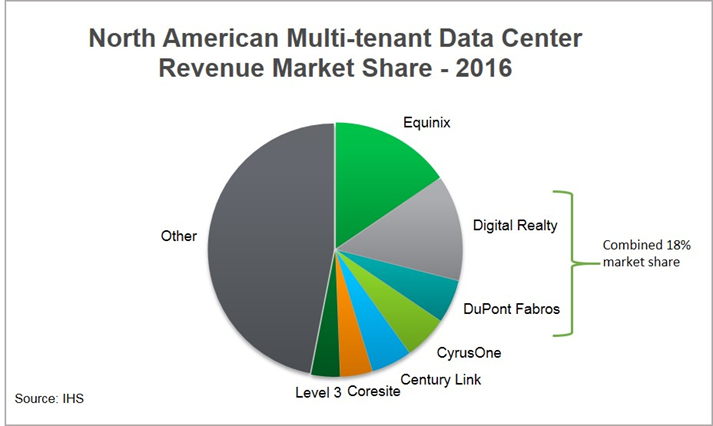 More than anything, the acquisition gives Digital additional firepower to go after the booming market for leasing data center space to hyper-scale cloud companies, who have been spending billions upon billions of dollars to expand capacity to serve their growing customer bases and compete among themselves for market share.

Total capital expenditures by Amazon, Microsoft, Google, IBM, Oracle, and Alibaba went from $7.2 billion in 2010 to $25.3 billion in 2016, according to an estimate by DuPont Fabros cited in a slide deck Digital Realty presented to analysts Friday. The company clearly doesn’t expect this rate of growth to decrease significantly any time soon, and DuPont Fabros has been successful in winning deals with those types of customers, signing for example a single deal for nearly 30MW total in Chicago suburbs and in Ashburn, Virginia, in the first quarter.

Having inventory available or close to being available in top markets is key to winning hyper-scale deals, and the acquisition gives Digital six projects currently under construction in Ashburn, Chicago, Santa Clara, and Toronto, all due to be delivered within the next 12 months. Nearly half the space in these future facilities has been pre-leased.

Besides just having product available, having more buildings per metro gives Digital the advantage of being able to provide multiple locations in a single metro to a cloud provider, Power said. To improve reliability of their services, cloud providers typically have two, three, or more physically separate cloud availability zones per metro, supplied whenever possible by different power grids, different electrical substations, and connected to different fiber networks.

Another major brand whose presence within Digital’s footprint will expand with the acquisition is Apple, which has signed for 14MW of capacity DuPont Fabros currently has under construction in the Chicago market, Jim Kerrigan, principal at the real estate firm North American Data Centers, said.

Here’s how Digital’s top 20 clients will rank if and when the acquisition closes (click to enlarge): 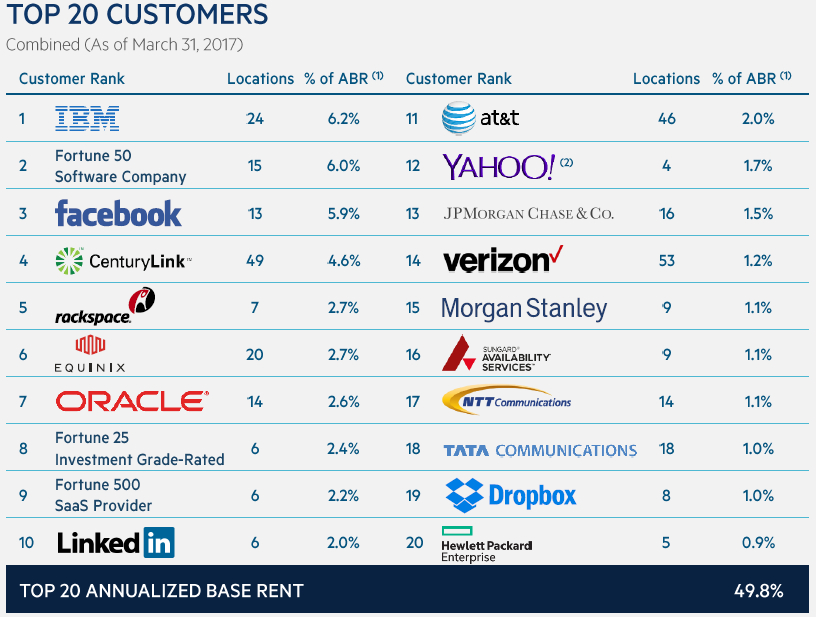 While expanded capacity and household-name customer relationships give Digital a big market advantage, the defensive aspect of the acquisition is hard to ignore. Several new heavyweight players recently entered the market, while previously existing competitors have been going after the hyper-scale deals more aggressively than before.

That’s the reason Kerrigan disagrees with an assessment by some analysts that the merger between Digital Realty and DuPont Fabros would reduce competition and help balance price control in the data center market. Had the deal taken place three or four years ago, Kerrigan said, he would agree with that assessment, “but I don’t agree with it now. There’s too many new players right now.”

One example is Digital Bridge, a company formed last year that has been making one acquisition after another, including most recently a deal to acquire Vantage Data Centers, one of the top hyper-scale players in the extremely tight Silicon Valley market. Digital Bridge is led by Michael Foust, founder and former CEO of Digital Realty.

Also going after hyper-scale deals is Infomart Data Centers, a company formed in 2014 as a result of a merger between Dallas Infomart and Fortune Data Centers. Infomart’s most well-known customer is LinkedIn.

Existing players CyrusOne and RagingWire have been very successful in winning hyper-scale deals. Both have substantial presence in Northern Virginia; CyrusOne recently entered Chicago with acquisition of the massive CME Group data center there and started construction of a Silicon Valley campus last year; RagingWire is close to announcing entry into both Chicago and Silicon Valley markets, according to industry sources.

The hyper-scale data center market is hotter than ever, and Digital Realty’s acquisition of DuPont Fabros, while making an already massive player even more massive, is not likely to cool things down. This is Digital’s third major acquisition in about two years’ time. In the fourth quarter of 2015 it closed the $1.9 billion Telx deal, entering in a big way the retail colocation and interconnection market in the US, and last year it acquired eight data centers in Europe from Equinix for $874 million, adding substantial retail and interconnection capacity across the Atlantic.

The DuPont Fabros deal, expected to close in the second half of the year, solidifies Digital Realty’s position as one of the world's top landlords for cloud giants, but that doesn’t mean cut-throat competition for hyper-scale deals will ease going forward.