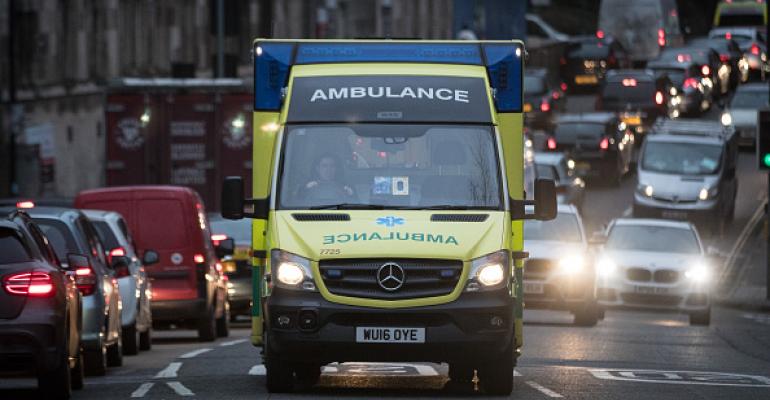 Ambulance arrives at the Accident and Emergency department of the Bristol Royal Infirmary in January 2017. (Photo by Matt Cardy/Getty Images)
Manage

Robert Hutton, Jeremy Kahn and Jordan Robertson (Bloomberg) -- Extortionist hackers who may be using leaked computer exploits from the U.S. National Security Agency infiltrated computers in dozens of countries in a fast-spreading attack that forced British hospitals to turn away patients and breached systems at Spain’s Telefonica SA and organizations from Russia to Taiwan.The ransomware used in Friday’s cyber-attacks encrypts files and demands that victims pay $300 in bitcoin for them to be decrypted, the latest in a vexing style of security breaches that, at the very least, forces organizations to revert to backup systems to keep critical systems running. The malicious software has infected more than 75,000 computers in 99 countries worldwide on Friday, most of them concentrated in Russia, Ukraine and Taiwan, according to Dutch cybersecurity company Avast Software BV.

The attackers were exploiting a vulnerability in Microsoft Corp. software that was patched in March, according to cybersecurity researchers. Attack code targeting that vulnerability was released publicly by Shadow Brokers, a group that has been leaking stolen hacking tools purportedly from the NSA. That connection has given critics of U.S. hacking ammunition for their argument that governments finding flaws in commercial technologies and keeping them secret for the purpose of exploiting them can carry a public risk.

See also: This Hacker Can Talk His Way inside a Data Center

“These attacks underscore the fact that vulnerabilities will be exploited not just by our security agencies, but by hackers and criminals around the world,” said Patrick Toomey, a staff attorney at the American Civil Liberties Union’s National Security Project. “It is past time for Congress to enhance cybersecurity by passing a law that requires the government to disclose vulnerabilities to companies in a timely manner. Patching security holes immediately, not stockpiling them, is the best way to make everyone’s digital life safer.”

While the victim tally is likely to grow, the ransomware, called WanaCrypt0r, only affects computers that haven’t applied Microsoft’s two-month-old fix, a reminder that individuals and organizations that don’t routinely update their machines are vulnerable. Hospitals are notoriously slow in applying security fixes, in part because of how disruptive it is to take patient-facing equipment and databases offline. That has made them a reliable target of ransomware and identity-theft attacks, and why they routinely fall victim even to random mass attacks.

In the U.K. on Friday, hospitals urged people with non-emergency conditions to stay away after the cyber-attack affected large parts of the country’s National Health Service. Sixteen NHS organizations were hit, while a large number of Spanish companies were also attacked using ransomware.

“A number of NHS organizations have reported that they have suffered from a ransomware attack,” U.K. Prime Minister Theresa May told reporters. “It’s an international attack and a number of countries and organizations have been affected. We’re not aware of any evidence that patient data has been compromised.”

Hospitals in London, North West England and Central England have all been affected, according to the BBC. Mid-Essex Clinical Commissioning Group, which runs hospitals and ambulances in an area east of London, said on Twitter that it had “an IT issue affecting some NHS computer systems,” adding “Please do not attend Accident And Emergency unless it’s an emergency!” 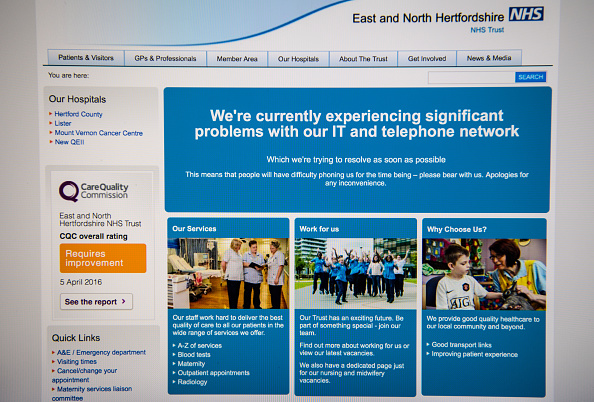 A message informing visitors of a cyber attack is displayed on the NHS website on May 12, 2017 in London, England. (Photo by Carl Court/Getty Images)

The impact on services is not due to the ransomware itself, but due to NHS Trusts shutting down systems to prevent it from spreading, said Brian Lord, a former deputy director of Government Communications Headquarters (GCHQ), the U.K.’s signals intelligence agency, who is now managing director of cybersecurity firm PGI Cyber. Lord, who described an attack of this type as "inevitable," said the impact was exacerbated because most NHS Trusts had "a poor understanding of network configuration meaning everything has to shut down."

A screen-shot of an apparent ransom message, sent to a hospital, showed a demand for $300 in bitcoin for files that had been encrypted to be decrypted.

Workers across the NHS have since been sent emails from the health service’s IT teams warning not to open or click on suspicious attachments or links.

Spain’s National Cryptologic Center, which is part of the country’s intelligence agency, said on its website that there had been a “massive ransomware attack” against a big number of Spanish organizations affecting Microsoft Corp.’s Windows operating system. El Mundo reported that the attackers sought a ransom in bitcoin.

“We’re aware of reports and are looking into the situation,” said a Microsoft spokesman.

While Friday’s attack could damage the reputation of Microsoft’s security, it’s likely to be limited, said Sid Parakh, a fund manager at Becker Capital Management, which owns Microsoft stock. There have been so many high-profile hacks that if a fix is available it’s the user’s responsibility to download it, he said.

“Every time this happens it hurts the underlying product’s reputation,” Parakh said. But Microsoft has “been in a worse state in the past.”

Ransomware typically gets onto a computer when a person unsuspectingly downloads a file that looks like a normal attachment or web link. A hacker can then trigger the malware to freeze the computer, prompting a person to pay a ransom or lose all their files.

Hospitals have been a common target because the culprits know how critical digital records are for treating patients. There have been several incidents in the U.S., including one in Indiana where a hospital’s IT system was taken down and patients had to be diverted to other facilities, according to a local news report.

Ransomware attacks have also been soaring. The number of such attacks increased 50 percent in 2016, according to an April report from Verizon Communications Inc. These types of attacks account for 72 percent of all the malware incidents involving the health-care industry in 2016, according to Verizon.

Andrew Barratt, managing principal of Coalfire, a company which provides cybersecurity risk assessments to the health-care sector, said that many NHS hospitals used personal computers with outdated Windows-based operating systems, which have makes them easy to attack. He said many of these systems were too old to patch and that many NHS Trusts did not spend enough time on technical best practices and audits, leaving them vulnerable to a variety of potential cyber-attacks, including ransomware.