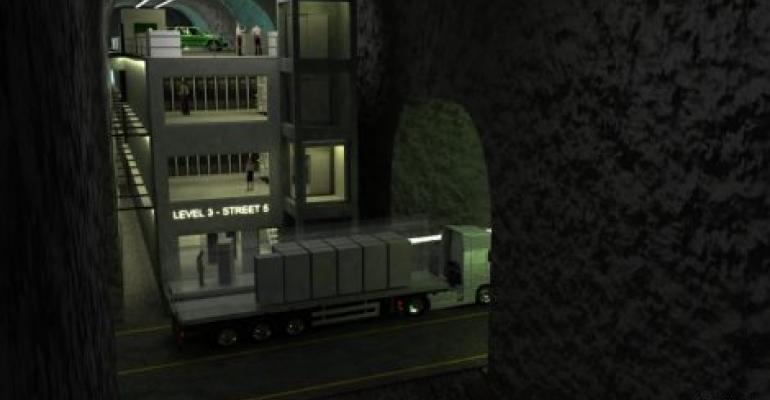 Inside the Lefdal mine data center in Norway, rendering (Image: Lefdal)
Colocation

Massive, Six-Story Data Center in a Norwegian Mine Comes Online

It's cooled by fjord water, it expands one or several containers at a time, and it's enormous.

An abandoned mine-turned data center in Norway will officially open on Wednesday, according to Lefdal, builder of what it claims is “the largest green data center in Europe.” Its first two tenants are IBM and the German industrial conglomerate Friedhelm LOH Group.

The Lefdal Mine Datacenter, built between the west Norwegian ports of Måløy and Nordfjordeid, offers 1.3 million square feet of space, much of it provided in containers designed, built, and shipped by Rittal. A fully customized container can be fitted out, shipped to the mine, hooked up, and brought online in six to eight weeks, Lefdal promises. There will also be three floors of traditional data center space, where more usual racks and cabinets can be installed.

Drawing all of its power from hydroelectric and wind power produced locally, the data center can go up to 200MW once fully populated—larger than each of Facebook’s two 120MW facilities in northern Sweden and Apple’s planned data center in Denmark, estimated to be between 100MW and 144MW.

Situated within a deep fjord—much like the neighboring Green Mountain facility at Stavanger—the servers will be cooled using seawater cooling systems. The saltwater brought from the depths of the fjord is 45 degrees and cools less corrosive fresh water. The fjord water remains pressurized and requires little energy to pump, eliminating the need for costly high-capacity equipment.

As a result, the facility will operate with a PUE between 1.08 and 1.1 for a 5 KW rack, according to LocalHost, designer of the unique cooling system.

“It consists of six levels (with the potential to expand to 14), sprawling over some 1.3 million square feet of 'white space' that can be used for [data] storage, connected by a paved road that descends in a spiral through tunnels 45 feet wide and almost 30 feet high. Just one of those levels could host all the servers in Norway.” 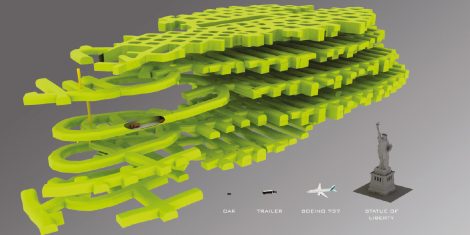 This illustration by Lefdal demonstrates the layout and the scale of its enormous underground facility.

"The flexibility is unique. Not only will one be able to 'plug and play' capacity needs, but the large space and the logistics also allows different product solutions in a cost effective way."

"For any data center construction, there are two common limiting factors: physical real estate and power capacity. This is one location where those two limiting factors disappear. It is hard to describe the scale of this facility. On the third level alone, where we are starting the buildout, we can house what would be thousands of virtual data centers that can scale flexibly, providing the perfect location to deliver hybrid IT, private and public cloud services for enterprises across Europe."