After the recent wave of consolidation in the data center services industry, the handful of giants have gotten so much bigger that they’ve become incredibly difficult to compete with, especially for market newcomers. The two main strategies for this latter group have been rolling up regional data center providers in smaller, secondary markets into nation-wide platforms and doubling up on specialized services beyond raw space, power, cooling, and connectivity – things like managed cloud, compliance, and other managed services.

Cyxtera Technologies, the new company former Terremark CEO Manuel Medina is building on the platform of the former CenturyLink data center portfolio, is going the second route, but it’s chosen to differentiate with a very specific focus: cybersecurity. While not inexistent, data center providers with such focus are not common. Also uncommon is the level of investment Cyxtera’s backers have put behind its security capabilities, buying four security and analytics companies in addition to the nearly 60 data centers worldwide from CenturyLink.

Cyxtera “intends to use this proprietary technology to target security- and compliance-minded verticals like government and financial services as part of a strategy that is focused on driving more value on top of raw infrastructure - increasingly crucial in a tightening market.”

Private equity firms Medina Capital and BC Partners closed the $2.15 billion acquisition of CenturyLink data centers last week and in parallel announced the launch of Cyxtera, transferring control of the data center portfolio and the four Medina-owned security and analytics companies to the new firm. Total value of the assets is $2.8 billion.

The four companies are:

@goeasysol became part of @cyxtera this morning, fair to say this group was excited! #GoCyxtera pic.twitter.com/rhNR8kdNuO

In a statement, Medina said:

“The last two decades have brought seismic changes to enterprise IT availability, agility and scalability, and the next era must be underpinned by a similar revolution in infrastructure security.” 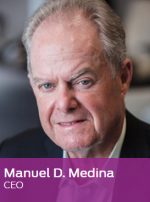 Medina is a well-respected leader in the data center and IT services space, his reputation stemming to a large extent from the successful sale of Terremark to Verizon in 2011 for $1.4 billion. Coincidentally, Verizon closed the sale of a data center portfolio that includes those former Terremark assets to Equinix the same week Cyxtera’s backers closed the acquisition of CenturyLink data centers.

The CenturyLink deal made the Monroe, Louisiana-based telco a big Cyxtera customer who also holds a minority stake in the company. CenturyLink now owns 10 percent of Cyxtera, which it received in addition to $1.86 billion in cash for its data centers. The telco plans to continue providing colocation and a variety of managed services out of those facilities, and retaining some equity in their operator gives it a degree of control, or “governance opportunities,” as Dean Douglas, CenturyLink president of sales and marketing, put it in an interview with Data Center Knowledge.

“We think [Cyxtera] is a good business going forward,” he said, explaining that the telco also expected its investment to pay off financially. “We think it’s a good investment, and it’s a very significant investment. [Medina] really knows this business extraordinarily well."

Jabez Tan, research director at Structure, said via email that retaining a stake in Cyxtera is an important strategic move for CenturyLink:

“CenturyLink retaining a minority stake in Cyxtera is necessary to maintain its current market positioning as a colocation provider even after the sale of its data center assets and essentially cements the relationship with Cyxtera moving forward as its primary partner for colocation services.”

Proud of my team as CenturyLink completed $2.8B transaction to spin out my Division & enable CTL to buy Level 3 https://t.co/QqCFDVRtxy

Commenting on Cyxtera, Tan said the real work begins now for Medina’s team as it starts to execute on its vision:

“Execution and the integration of the services from those five firms is perhaps the more important aspect in providing a seamless end-to-end customer experience, as Cyxtera appears to have an attractive set of building blocks in place to carve out a meaningful niche in an increasingly competitive infrastructure services market.”